The global ammonium sulfate market size was valued at USD 3.1 billion in 2019 and is anticipated to register a CAGR of 4.7% from 2020 to 2027. The growing consumption of nitrogen-based fertilizers to increase crop yield on account of the rising demand for food is likely to drive the product demand. The key factor driving the global market is the consumption of the product as a soil fertilizer as the chemical contains nitrogen and sulfur. It is mainly used for reducing the acidity in alkaline soils as they have a high pH level. Ammonium sulfate contains nitrogenous elements along with sulfur which is used for protein synthesis in plants. The product is also largely preferred for flooded soils used in rice cultivation as nitrate-based fertilizers are a poor choice as they could lead to denitrification and leaching. 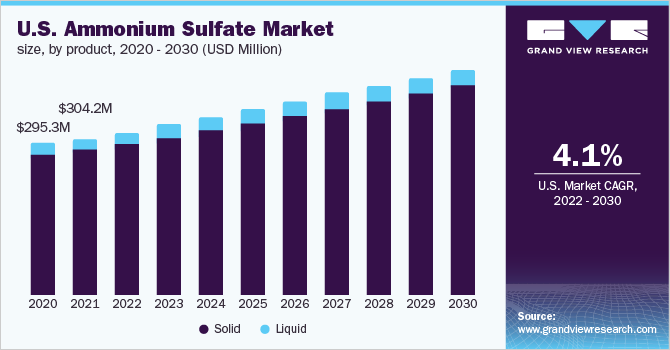 Ammonium sulfate is an inorganic compound mainly manufactured as a byproduct of industrial processes including caprolactam and coke oven production. It is also produced synthetically using pure ammonia and sulfuric acid. A majority of the commercially available products are obtained during the caprolactam oxidation process.

The consumption of ammonium sulfate in the U.S. is largely dependent on its application as a nitrogen fertilizer as it utilized over 70.0% of the total volume produced in 2019. However, the growth of the segment is anticipated to be driven by its rising consumption in the pharmaceutical and food additive industries. The U.S. Food and Drug Administration (FDA) has categorized ammonium sulfate as a safe acidity regulator in bread and flours. As an additive, it aids in controlling the pH level of baked products and is commonly used as a dough conditioner and dough strengthener. These factors are anticipated to have a positive impact on the demand for ammonium sulfate as a food additive in the country.

The pharmaceutical industry is another major contributor that drives the demand for ammonium sulfate in the U.S. The chemical is widely used as a cleaning agent during the vaccination process. According to a report published by Vaccine Fact Book, over two-thirds of the vaccines developed across the globe have originated in the U.S. Moreover, the consumers in the country have a high tendency to spend on vaccinations and medication.

Ammonium sulfate is mainly produced as a byproduct of caprolactam and coke oven processes. Caprolactam is widely used for the manufacturing of nylon fibers. Nylon fibers have a wide range of applications including textiles, carpets, industrial yarn, and fishing lines and nets. The rise in demand for nylon fibers has therefore resulted in a growth in caprolactam manufacturing, subsequently leading to an increase in the supply of ammonium sulfate globally. However, the consumption of the product is estimated to witness a slow growth rate over the forecast period, causing an oversupply in the marketplace. This factor has reduced the price of the product.

Furthermore, ammonium sulfate is considered to be toxic to human health. Worker exposure to ammonium sulfate in production sites, processing, and transportation could cause severe respiratory route infection due to inhalation of aqueous aerosols and dust. Prolonged skin contact might cause dermatitis, permanent eye damage, and lung damage. Such factors are anticipated to hinder the market growth.

On the basis of product, the global ammonium sulfate market has been segmented into liquid and solid. The solid segment accounted for the largest market share in 2019 owing to its water-soluble properties which make it suitable for applications such as fertilizers and food and beverages. Increasing awareness regarding crop quality and yield along with low cost when compared to its substitutes such as ammonium chloride and ammonium nitrate are expected to drive the growth of this segment over the forecast period.

The solid or crystalline grade is higher in purity and is hence anticipated to gain preference in the pharmaceutical industry. The solid grade consumption accounted for 80.2% of the global market in terms of volume in 2019. The liquid grade is mainly used in the fertilizer and water treatment industries. Liquid ammonium sulfate is widely accepted and used as an effective and stable source of ammonia for chloramination. This segment is expected to witness a CAGR of 4.9% from 2020 to 2027 in terms of value.

Major applications of ammonium sulfate include fertilizers, food and feed additives, pharmaceuticals, and water treatment. The market is mainly driven by increased food consumption owing to the growing population. The increased demand for food crops has resulted in the rise in agricultural production across the globe, which in turn drives the demand for agrochemicals such as fertilizers and pesticides. 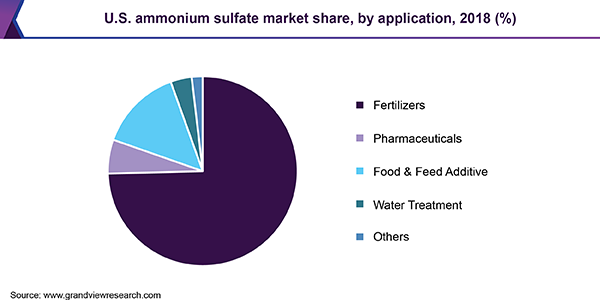 Fertilizer application accounted for 78.6% of the total global ammonium sulfate consumption in 2019. The product is rich in sulfur (S) and nitrogen (N) which has facilitated its use to meet the nutritional requirements of growing plants. It is highly preferred for crops such as potatoes, citrus fruits, rapeseed, soybean, and rice. Thus, the demand for ammonium sulfate is high in developing countries such as Brazil, Indonesia, India, and Vietnam owing to the high cultivation of the aforementioned crops.

The pharmaceutical industry, on the other hand, is anticipated to register the highest CAGR in terms of value over the forecast period. The increasing use of ammonium sulfate during the preparation of vaccines is projected to drive the product demand. The demand for vaccines is projected to witness significant growth owing to the rising awareness regarding diseases and the associated pre-treatment measures.

The Asia Pacific dominated the global market in 2019 owing to high agricultural production. The product demand is anticipated to be driven by increased dependency on nitrogen-based fertilizers. The growing population, along with the rise in food consumption, has led to an increase in the overall demand for agricultural commodities. This demand has encouraged local farmers to increase agricultural productivity by incorporating fertilizers.

Increasing population and advancements in agricultural techniques in the developing economies of Indonesia, China, Vietnam, and India are expected to be key factors driving the demand for ammonium sulfate in the region. Indonesia is anticipated to register the highest CAGR in terms of value over the forecast period, majorly due to the rising rice and coffee cultivation in the country.

Europe also has a vast agricultural area under cultivation wherein a wide range of crops is produced. According to the European Environment Agency (EEA), 39% of the total land area in the region was occupied by agriculture and grasslands in 2017. The EU has imposed restrictions on the consumption of nitrates, which is expected to positively impact the demand for ammonium sulfate.

The competitive factors that have a deep impact on the market growth include regulatory approvals, pricing, product grade, and manufacturing technology. Major manufacturers are focusing on the development of long-term contracts with end-users to maintain a long-term demand and sustain in the competitive market. In addition, manufacturers need to be aware of the changing regulatory scenario across borders and thus develop specific grades.

Companies such as Domo Chemicals, BASF, SABIC, and Honeywell International have a high degree of integration across the value chain as they are also engaged in the production of caprolactam. These companies have established themselves as key manufacturers and focus on research and development for novel uses of ammonium sulfate. Some other major manufacturers include Novus International, Sumitomo Chemical, and Helm AG.

This report forecasts revenue and volume growth at global, regional, and country levels and provides an analysis of latest industry trends in each of the sub-segments from 2016 to 2027. For the purpose of this study, Grand View Research has segmented the global ammonium sulfate market report on the basis of product, application, and region:

How big is the ammonium sulfate market?

What is the ammonium sulfate market growth?

Which segment accounted for the largest ammonium sulfate market share?

b. The Asia Pacific dominated the ammonium sulfate market with a share of 38.0% in 2019. The product demand is anticipated to be driven by increased dependency on nitrogen-based fertilizers.

Who are the key players in ammonium sulfate market?

What are the factors driving the ammonium sulfate market?

b. Key factors that are driving the market growth include increasing rising demand in the manufacturing of nitrogenous fertilizers and pharmaceuticals.

What was the price of ammonium sulfate in 2019?