The global non-alcoholic drink market size was valued at USD 1.1 trillion in 2018. Shifting customer focus towards a healthy lifestyle, coupled with changing diet patterns to consume nutrient-rich products, is expected to be a major factor driving the industry. Furthermore, rising concerns over adverse health implications associated with the consumption of alcoholic drinks are projected to upscale the utility of alternative drinks including functional beverages and soft drinks. 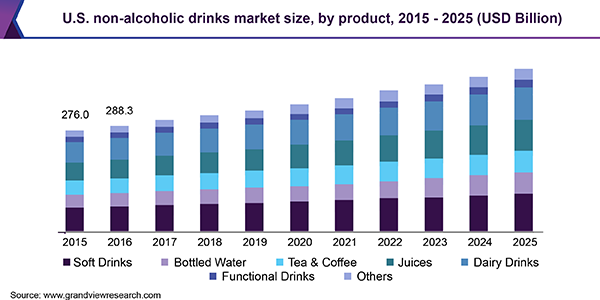 Adult consumer groups are projected to remain key buyers over the forecast period. The increasing population of working people, gym-goers, and athletes is expected to promote the demand for nutritious drinks, which will increase their performance as well as keep their energy levels high throughout the day. This is expected to aid the growth of non-alcoholic beverages such as energy drinks, juices, as well as functional drinks in the next few years. Moreover, consumers are shifting towards natural and organic food products, which are tastier, healthier, and more nutritious. This consumption trend is gaining popularity among the young adult population across the globe.

Rising health consciousness has fueled the demand for natural ingredients drinks. Therefore, the beverage manufacturers are launching innovative low sugar and low calories soft drinks and other natural drinks to cater to the increasing demand from health-conscious consumers. Sports drinks, energy drinks, antioxidant beverages, and functional drinks such as probiotic drinks are gaining popularity among health-conscious consumers and have become a key trend in the market. Manufacturers are making efforts to promote various health benefits associated with these products through various marketing strategies including celebrity campaigns.

Governments across the globe are taking initiatives in order to regulate and limit the consumption of alcoholic beverages as well as promote juices and healthy drinks. Over the past few years, the food preferences of consumers have been shifting gradually to fresh fruit beverages. Furthermore, rising awareness regarding healthy diets such as fresh fruit juice, raw food diet, and paleo diets is expected to remain one of the key trends.

According to the World Health Organization (WHO), in 2016, more than 1.9 billion adults aged 18 years and older in the world were under the overweight category. Moreover, in 2016, more than 340 million children and adolescents aged between 5 and 19 were overweight or obese. These health issues are expected to promote the utility of non-alcoholic beverages including functional drinks.

Soft drinks held the largest share of 24.3% in 2018. Major manufacturers are launching new products with less sugar content and no artificial preservatives and colors as they are the cause of chronic diseases including diabetes and cardiovascular diseases across the globe. For instance, in May 2018, The Coca-Cola Company launched a new light and less sugary juice namely ‘Simply Light’. This product is launched in response to the increasing demand for healthier fruit drinks. These product launches are projected to have a strong impact on segment growth in the near future.

Functional drinks are expected to expand at the fastest CAGR of 6.0% from 2019 to 2025 owing to the hectic lifestyle among the working population across the globe. This segment is projected to witness significant growth in the coming years on account of its increasing popularity as a nutritional product, which ensures the bioavailability of nutritional ingredients to the human body.

Moreover, changing customer preferences, increasing living standards, and growing health concerns in developing countries such as China and India are expected to open new avenues for the products including juices and dairy products. Fruit and vegetable juices are expected to find applications in product forms including ready-to-go drinks, snack seasoning, confectionery, and baked goods owing to their exceptional flavoring properties.

Offline was the largest distribution channel, accounting for a share of 81.2% in 2018. The offline channel includes supermarkets, retail outlets (company-owned or franchisee-owned), convenience stores, and convenience stores. Major players including Walmart, Amazon, and 7-Eleven are significantly investing in developing countries such as India, Thailand, and Taiwan, in order to cater to the increasing consumer demand in the region.

For instance, in February 2019, 7-Eleven, one of the world’s largest convenience store chains, signed an agreement with Future Group to launch its first store in India, which is expected to be one of the fastest-growing retail markets. In addition, in March 2019, according to a report published by The Wall Street Journal, Amazon is launching a new brand for grocery stores across major cities in the U.S. for gaining a larger market share. Moreover, the company has already signed leases for the stores, which indicates that the store may open within a few months. These initiatives are expected to expand the reach of the offline channels. 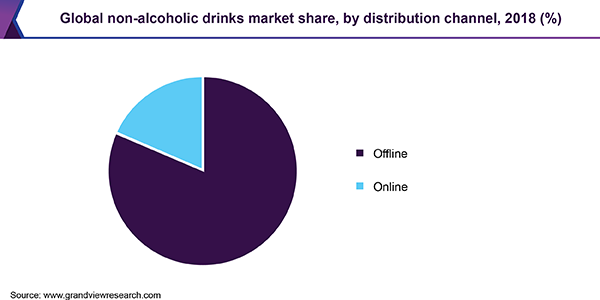 The online distribution channel is expected to be the fastest-growing segment, expanding at a CAGR of 5.6% from 2019 to 2025 owing to increasing internet penetration in various countries such as India and China. Major manufacturers are adopting marketing strategies such as product advertisement and celebrity marketing in order to gain maximum customer penetration. For instance, Flipkart, an online giant in India, which has become a part of Walmart, launches discount offers from time to time in order to propel sales. This, in turn, promotes online sales of grocery products such as soft drinks, flavored milk, bottled water, and coconut water.

North America accounted for the largest share of 34.5% in 2018. Key players of the region have been adopting marketing strategies including innovative product launches and mergers and acquisitions in order to cater to the increasing demand for natural, less sugary, and low-calorie content beverages. For instance, in January 2019, The Coca-Cola Company launched a new range of sparkling cocktails under the brand name ‘Bar None’ in U.S. Bellini Spritz, Sangria, Ginger Mule, and Dry-Aged Cider are the four flavors available in it. In addition, the company has introduced these beverages as the best alternative to alcoholic beverages at parties.

Asia Pacific is expected to expand at the fastest CAGR of 6.0% from 2019 to 2025. Increasing awareness regarding health benefits associated with non-alcoholic beverages such as improvement in cholesterol and saturated fat level in the body is driving the market in the region. Major manufacturers are launching new products in order to cater to the increasing demand from the customers. For instance, in March 2019, Gujarat Cooperative Milk Marketing Federation Limited (GCMMF) announced to launch of fruit juices under its renowned brand name ‘Amul’ in four flavors: Orange, Apple, Mango, and Lychee.

Various stringent government policies and regulations on alcoholic beverages are fueling the demand for these beverages. According to a report published by the Global Burden of Disease, in 2017, more than 310,000 deaths, coupled with over 10 million people with disability-adjusted life years (DALYs), were caused due to alcohol consumption in the European countries. In addition, EU-28 Member States have witnessed more than 125,000 deaths due to cancer majorly caused due to alcohol consumption. These harmful effects are projected to expand the utility of non-alcohol beverages in European countries.

The global non-alcoholic drink market is highly fragmented in nature owing to the presence of a large number of foreign as well as domestic players including PepsiCo, Inc.; The Coca-Cola Company; Danone S.A.; Nestle S.A.; and Parle Agro. Moreover, key manufacturers are adopting market strategies including mergers and acquisitions, new product launches, and expansion of the distribution channel in order to gain the maximum customer base as well as to cater to the increasing demand of the health-conscious customers. For instance, in October 2018, United Breweries Ltd. entered the non-alcoholic drinks segment with the launch of a lemon-based drink under the brand name ‘Kingfisher Radler’. These strategic moves are expected to ensure a significant demand for the products over the forecast period.

Major players are increasing their product visibility geographically, especially in developed countries, in order to gain the maximum customer reach. The establishment of R&D centers for product innovation, coupled with strategic partnerships with investment companies in order to launch new innovative products as per the customer’s demand in the region, is expected to remain a critical success factor over the next few years. Taking into account all the above-mentioned factors, producers are likely to focus on technology innovation to gain maximum market share.

This report forecasts revenue growth at the global, regional, and country levels and provides an analysis of the latest industry trends in each of the sub-segments from 2015 to 2025. For the purpose of this study, Grand View Research has segmented the global non-alcoholic drink market report on the basis of product, distribution channel, and region:

How big is the non alcoholic drinks market?

What is the non alcoholic drinks market growth?

b. North America dominated the non alcoholic drinks market with a share of 34.4% in 2019. This is attributed to adoption of marketing strategies including innovative product launches and mergers &acquisitions by U.S.-based beverages manufacturers in order to cater to the increasing demand for natural and low-calorie beverages.

Who are the key players in non alcoholic drinks market?

What are the factors driving the non alcoholic drinks market?

b. Key factors that are driving the market growth include shifting customer focus towards a healthy lifestyle, changing diet patterns to consume nutrient-rich products, and rising concerns over adverse health implications associated with consumption of alcoholic drinks.