The North America OTC hyaluronic acid market size was valued at USD 26.14 billion in 2015 and is projected to grow at a CAGR of 5.9% during the forecast period. The OTC hyaluronic acid market in North America is majorly driven by factors such as the presence of a large population aged between 25 and 55 years in the U.S. and the growing consciousness amongst this age group regarding skincare procedures.

In addition, the availability of anti-aging products, moisturizers, and anti-wrinkle treatments owing to the increase in the number of players operating in this region is further fueling the emergence of this market in North America. The high penetration rate of technologically developed cosmetic products amongst the target population, increasing prevalence of Osteoarthritis (OA) amongst the geriatric population, and high patient awareness level in the region are collectively contributing to its large share.

The expansion of cosmetics and beauty supply stores across the U.S. states, such as California, Florida, Texas, New York, Georgia, and Illinois, is one of the crucial attributes of this regional segment. Based on the data published by the U.S. Census Bureau, in 2014, the total number of cosmetic and beauty supply stores was 16,288, which reflects an increase of 6.32% and 11.2% from 2012 and 2010, respectively. The patient awareness campaigns in the form of ‘Arthritis Awareness Month’ and public surveys undertaken by various organizations such as Arthritis Foundation are also expected to boost the demand for hyaluronic acid in orthopedic treatment procedures.

The dermatology segment dominated in terms of revenue in 2015. The presence of a large target population and relatively higher consumer awareness levels are some of the factors accounting for its large share. However, the orthopedic segment is growing at a lucrative CAGR. The growing geriatric population suffering from various joint disorders and increasing awareness regarding the benefits of hyaluronic acid amongst orthopedic doctors are some of the crucial factors that are expected to boost the growth over the coming few years.

The prevalence of OA is growing at a significant pace amongst the geriatric population and the youth, which is expected to drive the demand for joint supplements in the coming years. The growing number of arthritis-related hospitalization cases and increasing awareness regarding the excellent physicochemical properties of hyaluronic acid-based drugs are some of the key attributes fueling the growth. The presence of significant players such as Anika Therapeutics, Inc.; Sanofi; Ferring B.V.; Zimmer Biomet; Fidia Farmaceutici s.p.a.; and B. Braun Melsungen AG is expected to favorably influence the market trend over the forecast period.

The retail segment dominated the overall market in terms of revenue in 2015. In 2015, the revenue for the retail segment of the OTC hyaluronic acid market in the U.S. was valued at USD 20.8 billion and expected to grow at a significant CAGR. The wide availability of cosmetics, as well as joint supplements in departmental stores, supermarkets, and drug stores, is one of the key factors that is expected to boost the market. 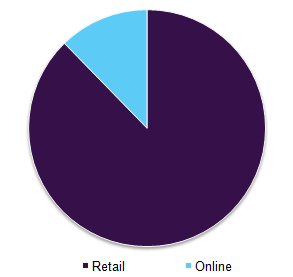 However, the rapidly growing internet users in the developed economies and growing non-Hispanics population in the U.S., the highest spender of cosmetics and beauty products are some of the key factors that are expected to propel the market over the forecast period. The increasing online participants in this market such as iHerb.com, amazon.com, swanson.com, drugstore.com, lucky vitamin.com, and evitamin.com is also expected to contribute to a greater market share over the forecast period.

The U.S. segment dominated the overall market in terms of revenue in 2015. The presence of a large target population and relatively higher patient awareness are some of the factors accounting for its large share. The presence of significant players is expected to drive segment growth during the forecast period.

Moreover, Canada is the fast-growing country in the North American region, growing at lucrative CAGR. In 2014, 6.2% of the population was suffering from OA, out of which, 32% opted for hyaluronic acid products. The presence of significant players also contributes to the growth through the launch of new products in this region.

Some of the key players include Shiseido Co., Ltd.; Lindberg Nutrition & GeniusCentral Systems; Nature’s Way Products, LLC; NOW Foods; NeoCell Corporation; Source Naturals, Inc.; Doctors Best; derma e; and Earth Science Naturals. The presence of a huge product portfolio of companies such as Nature’s Way Products, LLC.; NOW Foods; and NeoCell Corporation is one of the key attributes of this market. The majority of the companies operating in this segment are privately held.

This report forecasts revenue growth and provides an analysis of the industry trends in each of the sub-segments from 2013 to 2024. For the purpose of this study, Grand View Research has segmented the North America OTC hyaluronic acid market on the basis of product, sales channels, and region: