The global off-highway vehicle lighting market size was estimated at USD 763.1 Million in 2017 and is projected to expand at a CAGR of 7.0% over the forecast period. This growth can be attributed to the high demand for construction and mining equipment worldwide. Moreover, increasing adoption of LED lighting owing to its capability to deliver enhanced performance will drive the market. Government regulations regarding vehicle lights and workspace safety are also expected to boost market growth.

According to the statistics by the Federal Government of the United States, more than 50% of the construction site accidents involve heavy equipment. Between 2003 and 2010, more than 37% of the accidents were caused by dump trucks. Hence, the governments of various countries are adopting standard rules and regulations regarding vehicle lighting to ensure labor safety. Increasing demand for heavy construction equipment including excavators and loaders, particularly in China and India, due to heavy investments in public infrastructure development will also support the market growth. 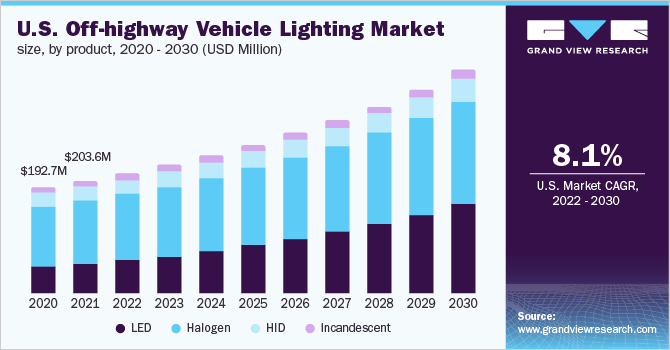 For instance, the Indian construction equipment market was valued at USD 3 billion in 2015 and is expected to double by 2020. Such significant rise in the demand for construction equipment is likely to bolster the need for vehicle lighting. Government initiatives aimed at encouraging the adoption of LEDs for reducing energy consumption coupled with the plummeting prices of LED products are boosting the demand for LED lights in the market.

Although the proposed ban on HID and incandescent bulbs in few countries including U.K., Japan, India, and Canada has had a moderate effect on the market, both the lighting types remain significant for the automotive and off-highway vehicle lighting markets. Furthermore, Canadian government is developing a strategy to reduce the country’s Greenhouse Gas (GHG) emission effects and increase the number of zero-emission vehicles.

Similarly, in U.S., the Corporate Average Fuel Economy (CAFÉ) standards are propagating the adoption of energy-efficient automobiles by formulating regulations for the reduction of fossil fuel consumption. These regulations have encouraged the adoption of new alternative fuel in off-highway vehicles. This, in turn, creates a highly conducive environment for the market.

Based on products, the global has been categorized into LED, halogen, HID, and incandescent. The halogen segment led the market in 2017 owing to low cost of these lights than LEDs. However, vehicle manufacturers have now started integrating LED lights owing to the decline in its price over the years. Moreover, regulations are mandating the adoption of the rear, side, and front identification lamps so that the approaching vehicle driver can judge the dimensions of the vehicle and prevent a crash.

Based on application, the market is segmented into headlight, tail light, work light, and others. Headlight is expected to be the largest application segment due to the introduction of advanced technologies, such as adaptive front lighting, night vision, and laser lights. Work lights segment is also projected to witness a considerable growth in future. These lights are an integral part of the equipment, as they improve the visibility and augment safety at workplace. The demand for LED-based work lamps has grown significantly in recent years owing to the better brightness and quality of light.

The others segment includes interior lighting, light bars, and other miscellaneous lights and is anticipated to register the highest CAGR of 10% over the forecast period. This can be attributed to the growing importance of aesthetic interiors in off-highway vehicles, such as dump and concrete mixer trucks and excavators. Moreover, government regulations mandating the usage of additional safety lights in heavy vehicles are anticipated to boost the market growth further.

The agriculture/farming/forestry segment is anticipated to expand at the highest CAGR of 9.5% over the forecast period. Demand for advanced agriculture and farming machinery is increasing in developing countries, such as India, where traditional agriculture techniques are still highly used. Thus, continuous technological advancements in the emerging economies is expected to result in high demand for LED-based lights.

The excavators segment led the global market in 2017. The growth can be attributed to the increasing demand for these types of equipment in construction and mining sector. According to World Mining Corporation, China was the largest producer of mineral raw materials in 2016 and accounted for around 23.62% of global mineral production. 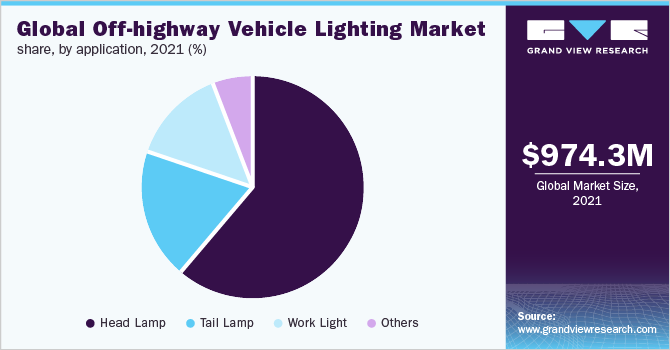 Moreover, dump trucks segment is also projected to generate considerable product demand owing to the introduction of Advanced Driver Assistance System (ADAS) with features, such as adaptive front lighting and night vision. Furthermore, the upward trend in the production of class 7 and 8 trucks is expected to boost the market growth further.

Asia Pacific emerged as the highest revenue-generating region in 2017. It accounted for USD 276.2 Million in 2017 and it is anticipated to witness a CAGR of 5.1% over the estimated period. This growth can be attributed to the presence of key manufacturers in Asian countries including China, Japan, and Taiwan. Factors, such as low production cost and availability of advanced machinery and skilled labor are also anticipated to spur the region’s growth.

Middle East & Africa is expected to be the fastest-growing regional market owing to increasing construction and mining activities in the region. Latin America is projected to be the second fastest-growing market due to increasing number of construction and mining activities in Brazil and Mexico. The governments of these countries have invested heavily in the development of public infrastructure. This factor is expected to trigger the demand for construction machinery, thereby boosting the market growth.

Some of the key companies in the global industry are Grote Industries; Truck-Lite Co., LLC; APS Lighting and Safety Products; Oracle Lighting; WESEM; ECCO Safety Group Co., Inc.; and HELLA GmbH & Co. KGaA. Most of these companies have adopted strategies, such as technological innovations and new product launches, to maintain their strong foothold in the industry.

For instance, in December 2017, Grote Industries introduced XTL LED Light Strips, extremely thin, flexible, and durable LED strips, which are ideal for use in heavy construction equipment. OEMs, such as Magneti Marelli S.p.A.; HELLA KGaA Hueck & Co.; and Harman International Industries, Inc., manufacture final products and supply those to automotive companies. Extending the geographical presence in potential construction markets, such as India and China, would be crucial for the manufacturers.

This report forecasts revenue and volume growth at global, regional, and country levels and provides an analysis of the latest industry trends in each of the sub-segments from 2014 to 2025. For the purpose of this study, Grand View Research has segmented the global off-highway vehicle lighting market report on the basis of product, application, end use, vehicle type, and region: