The global organic food and beverages market size was valued at USD 188.35 billion in 2021 and is expected to expand at a compound annual growth rate (CAGR) of 13.0 % from 2022 to 2030. One of the primary factors driving market expansion is growing awareness about the health benefits associated with the consumption of organic products. Sales of organic food and beverages are projected to rise as a result of the change in the purchasing behavior of the consumer. Additionally, the rising popularity of non-GMO products amongst consumers is driving the growth of the market. 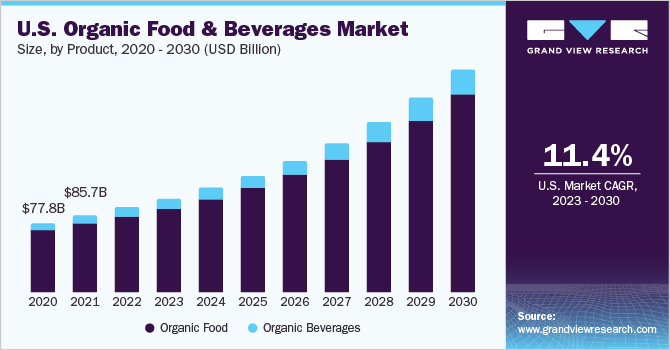 Despite having higher prices than non-organic products and the world GDP decline being the biggest in decades, still, organic food sales witnessed a spike in 2020. The growth rate of organic packaged food and beverages was the highest among all health and wellness categories. Starting in 2020, consumers shifted their food purchasing and consumption habits during the period of COVID-19 when restaurants were closed, and home cooking become the practice. According to the United State Department of Agriculture (USDA), German consumers purchased 22% more organic products in the same year.

The demand for organic ingredients has grown over the past few years, owing to the desire for improved overall health among consumers and the awareness regarding the harmful effects of synthetic ingredients. Several health risks are associated with the use of conventional foods, owing to the presence of synthetic chemicals such as pesticides and antibiotics in animals and plants. The growing demand has resulted in an increase in the production of organic items. Recent estimates by USDA indicated that in 2020, about 39 million acres or 16 million hectares were under organic agricultural management.

Government participation in helping consumers to understand the difference between falsely labeled products and legitimate ones has also contributed to overall market development. Governments around the globe have also issued certain guidelines barring the use of chemicals, pesticides, growth hormones, and other synthetic chemicals. Moreover, the government of India is encouraging organic farming by offering incentives to cultivators of organic food products under the National Horticulture Mission (NHM). Farmers are being offered Rs. 10,000/- per hectare for a maximum area of four hectares per beneficiary and organic farming certification @ Rs. 5.00 lakh for a group of farmers covering an area of 50 hectares in India.

The negative impact of conventional farming practices has far exceeded its positive results. Water contamination in oceans is one of the after-effects of conventional farming in addition to pesticide-resistant pests, degrading soil fertility, rampant human diseases, expensive cleanups, and dead zones. Regulatory support for biological farming and supply trade regulations are expected to have a positive influence on the organic food & beverages market over the long term. The intensification of the traditional farming system has generated a need for the usage of organic farming methods to maintain healthy soil in the long run.

Nevertheless, the high cost of production and operations and shorter shelf life are projected to constrain the market growth during the forecast years. Additionally, premium pricing of products limiting widespread customer acceptance, and limited options to choose from the product assortments are also hampering the market expansion. Also, high packaging, logistics, and distribution cost to extend shelf life are restricting the growth of the organic food market.

Fruits and vegetables emerged as the leading sector of the market and accounted for a 40% share of the organic food revenue in 2021. The trend of organic vegetables was initiated in developed regions including North America and Europe and has extended to emerging economies such as India and China. North America and Europe are the largest consumers of organic foods. Nonetheless, the consumption of organic meat, fish & poultry products is predicted to register the highest CAGR of 14.9% by 2030. Increasing concerns regarding artificial preservatives and additives are anticipated to augment the growth of product demand over the coming years.

The organic beverages market is segmented into non-dairy beverages, coffee & tea, beer & wine, and others including juices and soft drinks. Coffee & tea sales are likely to observe the highest CAGR of 16.2% during the forecast period, due to the high consumption of flavored tea and coffee by consumers. The organic beverages market is poised to grow exponentially as consumers opt for natural drinks over carbonated beverages owing to a wide range of health benefits. Non-dairy beverages such as soy, rice, and oat led the beverage segment in 2021. Increasing adoption of vegan culture and its low-fat content is likely to boost the segment's growth.

The offline distribution channel made a larger contribution to the global market of over 64.9% in 2021. These stores have a broad portfolio of branded as well as domestic products. Some of the brick-and-mortar stores in the offline segment include hypermarkets/supermarkets, specialty stores, franchisee stores, and club stores, among others. The convenience provided by this distribution channel and its ability to stock popular brands has been supplementing the growth of this segment. Increasing number of supermarket & hypermarket chains and altering retail landscape, particularly in developing economies are boosting the sales of organic food and beverages via this channel. 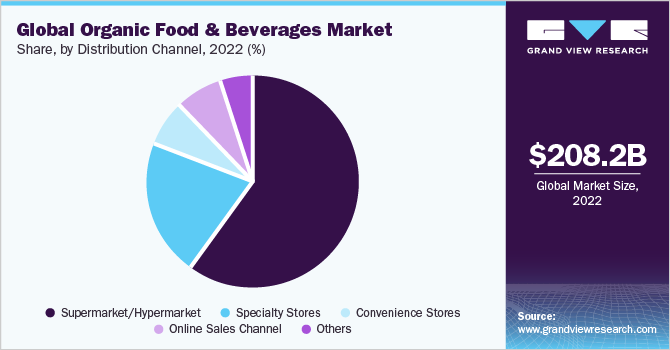 The online distribution channel is projected to register a CAGR of 13.6% from 2022 to 2030. Rising internet penetration and target marketing done by companies to reach all customer touch points are likely to fuel the growth of this segment. The trend of online sales and subscription boxes for organic produce has grown significantly in the last two years, which is expected to have a positive effect on the market growth. Rapid penetration of online groceries and online food delivery platforms coupled with the surge in adoption of smartphones further triggers the growth of the market.

Availability of farmlands for organic farming in the U.S., Australia, and Argentina has forced the regulators to frame supportive policies to increase the production output of organic foods. This factor in turn is projected to have a positive impact on organic food and beverages market demand over the forecast period. The North American organic food & beverages market is expected to record a prominent growth due to the unique advantages associated with the products such as eco-friendly, zero chemical and residue-free, and healthier compared to conventional food. Increasing consumer awareness regarding the benefits of non-genetically modified or engineered products intake is anticipated to fuel the North America market in the near future.

Asia Pacific is anticipated to be the fastest-growing region with a CAGR of 17.5% from 2022 to 2030 owing to the rising trend of ready-to-eat food among the working-class people as well as growing millennia in countries such as India. China, India, and Japan are the major markets, in terms of consumer spending on food. Moreover, a substantial rise in the demand for frozen food owing to less time for preparation and cooking is opening new avenues in the regional market for organic frozen food.

The market includes both international and domestic participants. Key market players focus on strategies such as innovation and new product launches in retail to enhance their portfolio offering in the market.

Some of the key players operating in the global organic food and beverages market include:

This report forecasts revenue growth at global, regional & country levels and provides an analysis on the latest trends and opportunities in each of the sub-segment from 2017 to 2030. For this study, Grand View Research has segmented the global organic food and beverages market report on the basis of product, distribution channel, and region:

How big is the organic foods and beverages market?

What is the organic foods and beverages market growth?

Which segment accounted for the largest organic foods and beverages market share?

b. Fruit & vegetables dominated the organic food and beverages market with a share of more than 35% in 2021. This is attributed to rising organic vegetable demand in developed and developing regions such as Europe, North America, and the Asia Pacific.

Who are the key players in organic foods and beverages market?

What are the factors driving the organic food and beverages market?

b. Key factors that are driving the organic food and beverages market growth include the desire for improved overall health among consumers and increasing awareness regarding the harmful effects of synthetic ingredients.