The global phosphate rock market size was valued at USD 22.30 billion in 2021 and is expected to expand at a compound annual growth rate (CAGR) of 3.2% from 2022 to 2030. Increasing demand from fertilizers is anticipated to boost the demand for phosphate rock over the forecast period. The rising global population, coupled with the growing food industry, is expected to drive the need for grains and cereals over the coming years. 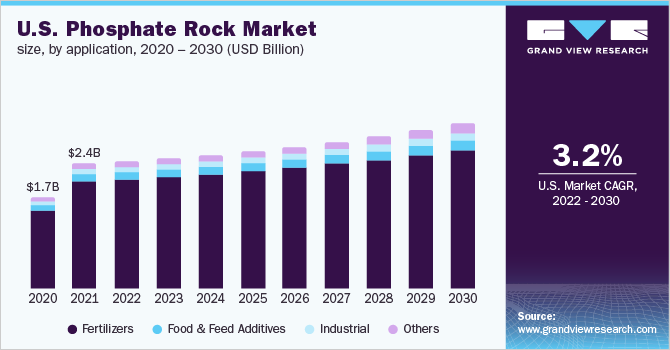 According to the Food and Agriculture Organization, food production has to increase by 70% by 2050 in order to supply food for the global population. This is anticipated to boost the demand for fertilizers, which is expected to augment the market growth over the coming years. The demand for phosphate fertilizers is expected to be driven by an increase in food and feed production to meet the rising needs of livestock and humans. The U.S. is one of the largest producers of cereals, grains, and oilseeds. This is anticipated to drive the market over the forecast period.

According to data published by National Agricultural Statistics Service Information, the per capita consumption of poultry and red meat in the U.S. increased to 224.63 pounds per person from 224.10 pounds per person in 2019. The growing demand for high-quality meat is projected to boost the demand for animal feed with high nutrition, which, in turn, is expected to drive the market for phosphate rock over the coming years.

The outbreak of foot and mouth disease (FMD), highly pathogenic avian influenza (HPAI), and African Swine Fever (ASF) represents a significant threat to the animal feed industry and thus to the market for phosphate rock. Small and large outbreaks of such diseases rapidly affect the demand, where consumption and production witness a decline. Thus, the outbreak of such diseases is projected to affect the market dynamics of the phosphate rock industry.

The fertilizers segment accounted for the largest share of over 75.0% in 2021, in terms of revenue. The segment is projected to grow in the years to come owing to the increasing demand from the agricultural industry due to the growing population across the world. As per the data published by the Food and Agriculture Organization, the global demand for phosphorous as P2O5 in fertilizers is estimated to be 49 million tons in 2020, an increase from 45 million tons in 2018.

Meat and dairy are the major sources of protein to ensure healthy food for the ever-growing world population. The processed phosphoric acid and limestone are fed into a high-speed mixer to create a homogenous mixture, which is then dried and packed for the end-users. The major feed phosphates are monocalcium phosphate (MCP), dicalcium phosphate (DCP), and others. Phosphate feeds improve bone strength and fertility in animals.

Hydroponics has been gaining worldwide attention owing to the quality food production and proper resource management. Soil-based farming is facing challenges such as climate change, natural disasters, and declining fertility of the land. In such cases, hydroponics can be greatly beneficial as it involves cultivating plants in nutrient solutions. Countries such as Canada, the U.S., France, the U.K., Israel, the Netherlands, and France are likely to offer opportunities in hydroponics over the coming years.

Asia Pacific accounted for the largest volume share of over 45.0% in 2021 due to diversified food needs in populous and emerging countries, such as India and China. The growing demand for food in the region is expected to fuel the utilization of fertilizers in order to increase the efficiency of crop production, which is anticipated to boost the demand for phosphate rock over the coming years. The demand for phosphate rock in Asia Pacific is primarily driven by population growth, government initiatives, prices, and production. 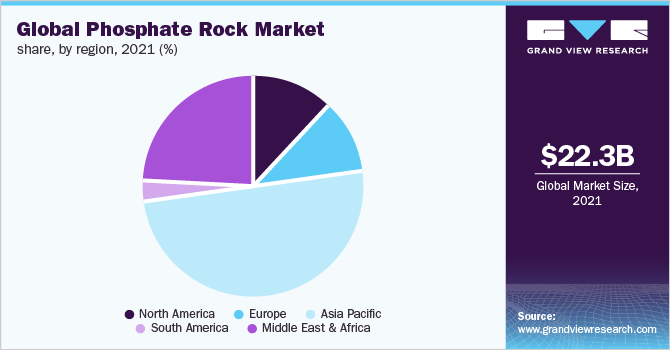 The agriculture sector in APAC is expanding and the population is mainly dependent on the domestic farming sector. These factors are encouraging farmers to increase land productivity by using several soil inputs, thus propelling the regional market growth. The Middle East and Africa region accounted for the second-largest share in 2021 and is projected to grow at a rate of 2.3% from 2022 to 2030, in terms of volume. Africa has the largest phosphate rock reserves in the world. According to the data published by the USGS, Morocco and Western Sahara together have over 70% of the world’s phosphate rock reserves.

The phosphate rock value chain consists of mining companies, distributors, manufacturers of phosphate rock-based products, and end users. About 70% of players in the market are vertically integrated and engaged in the mining of phosphate rock to the manufacturing of fertilizers. This scale of operations helps to lower logistics costs and address supply chain challenges such as delays in product delivery and high transport costs. At the same time, it assists for efficient monitoring and improvement of production quality.

This report forecasts revenue and volume growth at the global, regional, and country levels and provides an analysis of the latest industry trends and opportunities in each of the sub-segments from 2017 to 2030. For the purpose of this study, Grand View Research has segmented the global phosphate rock market report on the basis of application and region:

How big is the phosphate rock market?

What is the phosphate rock market growth?

Which segment accounted for the largest phosphate rock market share?

b. Based on region, Asia Pacific was the largest market with a revenue share of nearly 50% in 2022, owing to the growing demand for food and to increase the efficiency of crop production in the region, which is expected to boost the fertilizer requirement.

Who are the key players in phosphate rock market?

What are the factors driving the phosphate rock market?

b. The key factor driving the phosphate rock market is the increasing demand for fertilizers for efficient food production to feed the growing population.

The current pandemic situation has created disruption in the manufacturing of agrochemicals by virtue of raw material availability. Furthermore, this continual trend shall have a cascading effect on food productivity and crop yields on economies that are predominantly agrarian, during a time when demand for Agri produce shall register a spike over the medium term. Governments across the developing world are vying to incrementally ease restrictions on the manufacturing of fertilizers and maintain seasonal agricultural activities in order to reduce concerns regarding food security, which is a critical indicator for determining the course of a supply gap in the industry. The report will account for COVID-19 as a key market contributor.