The global polychlorotrifluoroethylene market size was estimated at USD 537.3 million in 2019, growing at a compound annual growth rate (CAGR) of 4.0% over the forecast period. Superior properties exhibited by polychlorotrifluoroethylene (PCTFE) over its counterparts including improved moisture protection as well as temperature resistance are expected to propel demand across end-use industries.

Increasing penetration of the product in the aerospace industry to manufacture valve seats, plugs, diaphragms, and impellers is likely to be a key growth driver for the PCTFE market. Polychlorotrifluoroethylene resins are gaining high demand for manufacturing moisture barrier coatings, which are increasingly used in drug manufacturing, thus promoting its use over the forecast period. 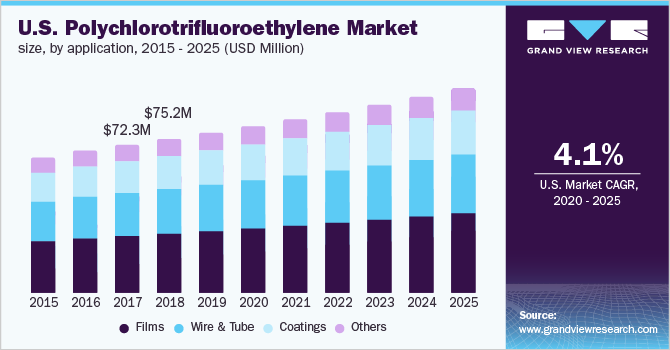 The product witnessed a significant price hike in 2015 owing to increase in raw material prices, which compelled end-use industries to increase their product prices. However, the prices stabilized in 2016, and this trend is expected to continue over the forecast period on account of stable polymer prices.

The dominance of leading industry player Daikin Industries Ltd., coupled with high cost associated with PCTFE production, is expected to be a major threat for new entrants. Furthermore, high product cost limits its overall potential in end-use industries, which is expected to be a key concern for new investors in the PCTFE industry.

High penetration of existing substitutes such as polytetrafluoroethylene (PTFE), chlorotrifluoroethylene (CTFE), and ethylene tetrafluoroethylene (ETFE) is likely to be a threat to the market. However, the superior resistance, abrasion, toughness, and high tensile strength offered by the product are likely to allow the industry to counter this threat over the projected period.

Aerospace manufacturing industry consists of maintaining, selling, testing, building, and designing of spacecraft, aircraft parts, missiles, and aircraft. According to the International Trade Administration (ITA) and the U.S. Department of Commerce, the U.S. aerospace industry accounted for approximately USD 147 billion in 2016, which is expected to rise significantly over the next eight years.

A diminished property of the fluoropolymers in some areas is compensated by its superior properties in other. For instance, PTFE at ambient atmospheric conditions has lower mechanical properties as compared to polyvinylidene fluoride (PVDF). However, PTFE has higher chemical resistance as compared to PVDF. The selection of a particular resin is thus dependent on the application it is being used.

Polychlorotrifluoroethylene (PCTFE) is very expensive to manufacture on account of the high price of the monomers utilized in the same. Moreover, the small market size of PCTFE makes its production all the more expensive. This factor has limited the applicability of PCTFE to a relatively small set of industries despite its inherent advantages.

The injection molding and extrusion processes utilized to treat PCTFE and manufacture end-use products subsequently have a high cost associated with them. The low thermal and chemical resistance of PCTFE as compared to the cheaper PTFE is also another factor expected to restrain the market over the next eight years.

The demand for PCTFE films is expected to increase at a CAGR of 4.5% from 2017 to 2025 on account of their usage in the pharmaceutical industry to provide moisture resistance to drugs. Furthermore, increasing use of the product in manufacturing blister packaging is likely to propel demand over the forecast period.

PCTFE-based wires and tubes have excellent resistance to cold flow and offer dimensional stability for an extensive range of temperatures. In addition, they offer low moisture absorption, low gas permeability, high rigidity, and good transparency in products, which promotes its use across end-use industries.

The PCTFE coatings segment was valued at USD 103.3 million in 2016. These coatings exhibit superior properties such as weather resistance, corrosion resistance, chemical resistance, heat resistance, and demolding. As a result, demand for these coatings is expected to grow in industrial applications.

Other applications of PCTFE include use in manufacturing rods, waxes, oils, and greases. The products are used in a variety of fields such as high-pressure vacuum plants, electrical components, glass windows, semiconductor components, and automobiles.

The pharmaceutical segment was valued at USD 104.3 million in 2016, as the product possesses the ability to provide resistance to medicines against UV radiation, temperature, and moisture. Furthermore, growth in pharmaceutical manufacturing in emerging economies on account of rising consumer health awareness is likely to positively impact the polychlorotrifluoroethylene market. 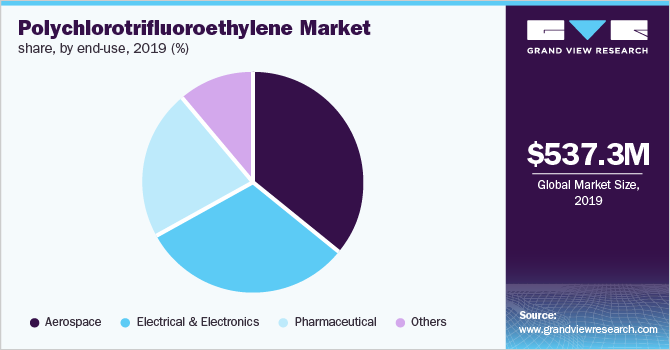 Aerospace was the largest application segment in 2016, accounting for 36.2% of the overall demand. The product finds high demand in manufacturing aerospace plugs, diaphragms, impellers, and valve seats on account of its lightweight and durability.

PCTFE products are used in laboratory instruments, chemical and cryogenic processing equipment, nuclear plants, and other radiation-prone equipment. The superior chemical and thermal resistance imparted by PCTFE products help in improving the operational efficiency of the aforementioned equipment and processes, thus resulting in high demand.

Asia Pacific dominated the Polychlorotrifluoroethylene (PCTFE) market and accounted for the largest revenue share of 43.97 % in 2016. Macroeconomic factors in Asia Pacific such as the expanding middle-class population, rising disposable income, increasing standard of education, changing demographics, and rapid urbanization are driving the electrical & electronics industry in the region. The demand for consumer electronics is thus particularly high in the region. This factor has thus led to a rise in demand for PCTFE based films, sheets, and coatings in the region.

Demand in Asia Pacific is expected to rise at a CAGR of 4.5% from 2017 to 2025. Growing aerospace, electronics, and pharmaceutical industries and large investments in R&D aimed at achieving higher efficiency and performance of the product are triggering industry growth.

The market in the region is fueled by the government’s initiative to provide affordable prescription drugs to citizens, and also by providing favorable environment for foreign investments. Asia Pacific is characterized by the existence of a multiple small players having in-line manufacturing capabilities unlike their western counterparts. The pharmaceutical PCTFE end-use segment in the region is anticipated to ascend at a significant growth rate on account of favorable government regulations and availability of low labor costs. 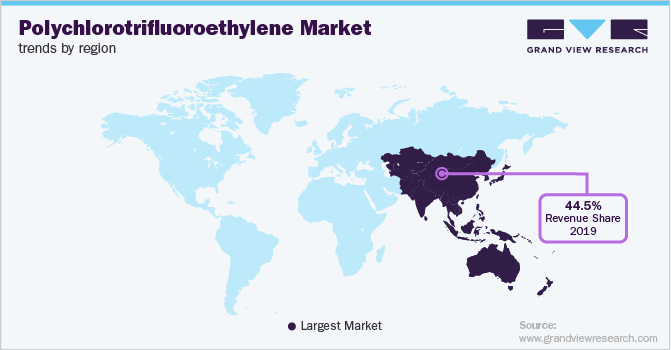 China was the largest market in Asia Pacific, accounting for 43.6% of the regional demand in 2016. In 2017, the country was the largest manufacturer of pharmaceutical ingredients and the second largest market for medicines in the world. High investments from the Chinese government in drug manufacturing to fulfill rising domestic demand is expected to propel industry growth. In North America, the market owes its growth to rapid expansion and firm establishment of the aerospace industry in the region, particularly in the U.S. Presence of major aerospace manufacturers such as Boeing, Lockheed Martin, and Airbus has also benefited the market. In terms of revenue, the aerospace segment in the U.S. market was valued at USD 25.9 million in 2016.

Europe is the second largest market and accounted for over 25% market share in 2016. The formation of a European Industrial Map and efforts taken by the European Union to maintain its edge as a leading electrical and electronics manufacturer have benefitted the European market and are likely to continue to do so over the forecast period. Growth of sectors such as mobile devices and wireless applications is further expected to fuel industry grow.

The pharmaceutical industry in the region is poised for growth due to factors such as increased household disposable income, low interest rates for manufacturing companies, and initiation of investment plans in healthcare sector proposed by the European Union. Positive signs in public and private debt are also contributing favorably to pharmaceutical and electrical & electronics industry growth.

Central and South America and Middle East and Africa collectively accounted for around 10.0% of the market in 2016. The regions are expected to witness slower growth in comparison owing to relatively lower use in various application industries. Furthermore, low penetration of the product to replace traditional fluoropolymers in these regions has influenced PCTFE market growth.

Companies such as Daikin Industries Ltd.; Arkema; E. I. du Pont de Nemours and Company; and Honeywell International Inc., which account for a major share in the global market and PCTFE-based products, have adopted strategies such as expansion of production capacities to meet rising demand.

As of 2017, Daikin Industries, Ltd. is the largest supplier of polychlorotrifluoroethylene in the world. The company is a producer of PCTFE films, wires, and tubes, and coatings and its operations are integrated across the value chain.

This report forecasts revenue and volume growth at global, regional, and country levels, and provides an analysis of the latest industry trends in each of the sub-segments from 2014 to 2025. For the purpose of this study, Grand View Research has segmented the global polychlorotrifluoroethylene market report based on application, end use, and region. 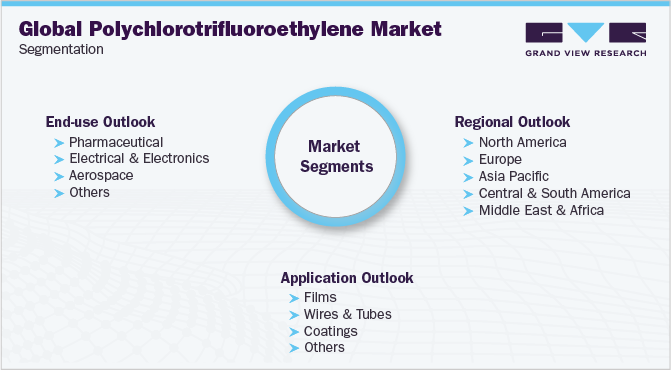 What is the polychlorotrifluoroethylene market growth?

Which segment accounted for the largest polychlorotrifluoroethylene market share?

b. Aerospace application segment dominated the polychlorotrifluoroethylene (PCTFE) market with a share of 35.7% in 2019. This is attributable to rising demand in aerospace application such as plugs, diaphragms, impellers, and valve seats on account of its light weight and durability.

Who are the key players in polychlorotrifluoroethylene market?

What are the factors driving the polychlorotrifluoroethylene market?

b. Key factors that are driving the market growth include rising demand in application such as laboratory instruments, chemical and cryogenic processing equipment, and nuclear plants owing to superior chemical and thermal resistance.

How big is the polychlorotrifluoroethylene market?

b. The global polychlorotrifluoroethylene (PCTFE) market size was estimated at USD 537.3 million in 2019 and is expected to reach USD 558.8 million in 2020.