The global polyisobutylene market size was estimated at USD 4.33 billion in 2015. It is expected to witness significant growth owing to rising demand from end-use industries such as sealants, fuel additives, pharmaceutical, and automotive. Growing use of polyisobutylene (PIB) in the tire industry for the manufacturing of tires and tubes is expected to drive the market growth over the forecast period. In addition, enhanced properties of polyisobutylene including impermeability to moisture and gasses are expected to add to the market demand over the next eight years.

Furthermore, increasing emphasis by governments of matured economies such as the U.S. and European countries for eco-friendly polyisobutylene products is likely to fuel the growth in innovations aiming at the development of such products. Also, Asia Pacific is expected to remain a lucrative market on account of the positive outlook towards automotive and construction sectors in emerging economies including China and India.

Polyisobutylene has increasing applications scope in industries such as adhesives, sealants, construction, healthcare, sports equipment, and automotive owing to its enhanced properties. These include superior impermeability, oxidation resistance, ozone resistance, and improved stability. In addition, improved weathering resistance is likely to increase the market demand for polyisobutylene in the manufacturing of products such as construction sealants, pharmaceutical stoppers, hosepipes, and various mechanical goods.

Polyisobutylene, also known as polyisobutene, is a synthetic rubber, or elastomer, which is manufactured by the polymerization of isobutylene. The product is used in numerous applications including adhesive & sealants, fuel additives, and automotive rubber components. PIB is also used in the production of chewing gums, roofing membranes, gas masks, and polymer modification, and sporting equipment.

Growing use of polyisobutylene as a sealant in the sealing of photovoltaic system panels, owing to improved properties such as electrical insulation and resistance to gasses, and water vapor is expected to propel the market over the next eight years. Moreover, production capacity expansion is expected to remain a key critical success factor among catalyst manufacturers over the next eight years.

The automotive sector was the dominant segment accounting for a share of over 75 % in 2015. Rising use of polyisobutylene-based butyl rubber in the tire industry to manufacture tubeless tires owing to improved air retaining and bonding properties is likely to drive the demand over next eight years. Furthermore, growing use of PIB in the tire industry on account of improved heat retention capabilities during tire vulcanization is expected to augment demand.

Furthermore, The PIB in two stroke engine oil industry is anticipated to witness a high growth on account of its ability to eliminate engine deposits and clean burning in the automobile and industrial engines industry. Moreover, polyisobutylene when utilized in polymer modification processes provides various characteristics to random and impact modified copolymer. These properties include high melt flow rates, enhanced impact strength, as well as greater elongation.

Growing use of polyisobutylene-based butyl rubber in manufacturing automobile components including hosepipes and gaskets, and window strips owing to superior flexibility, thermal stability, and impermeability and improved oxidation resistance is likely to accelerate demand in the automotive sector over next eight years. Rising automotive demand in the emerging economies of Asia Pacific and the Middle East & Africa on account of improving the road infrastructure, rising spending capacity, and increase in per capita ownership of vehicles is expected to affect the automotive sector in the region, which in turn will drive the demand for PIB.

The additive segment accounted for around 11% of the overall market in terms of volume in 2015. It is expected to grow at a CAGR of 6.9% from 2016 to 2024. Rising R&D investments to improve the performance of diesel and gasoline fuel is likely to propel the demand for fuel additives over the forecast period. In addition, the growing use of PIB in lubricant additives owing to its deposit control property is likely to propel the growth in the manufacturing industry over the next eight years.

Europe emerged as the dominant regional market accounting for 43.7% of the global volume in 2015. Rising demand for PIB from industries such as automotive, tire and adhesives is expected to drive the demand over the next eight years.

North America polyisobutylene market is likely to grow on account of existence of established automotive manufacturers and various personal care and cosmetics companies like Maybelline, Procter and Gamble, Colgate-Palmolive, Avon, Unilever, Johnson & Johnson. Moreover, the packaging industry in the U.S. is expected to exhibit a significant growth with respect to rising consumption of packaged medicaments and beverages in domestic as well as exports to international markets. 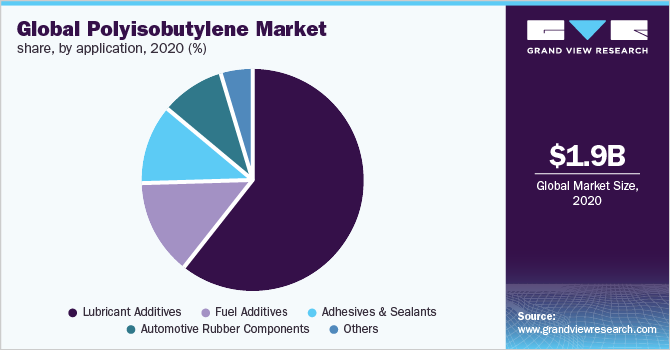 Growing investments by petrochemical giants in R&D activities for new eco-friendly products is expected to accelerate the growth in the region. In addition, rising demand for packaging in the pharmaceutical industry to preserve the efficacy of drugs is expected to augment market growth over the forecast period.

Asia Pacific is expected to witness a significant share of demand on account of rising investments by the petrochemical companies in product innovation and development. Increasing demand for polyisobutylene in the end-use industries such as automotive and sealants is expected to fuel the growth.

Key market participants include BASF SE, Exxon Mobil, Lanxess AG, TPC Group, and INEOS. ExxonMobil is an oil & gas company involved in upstream and downstream exploration and production business. The company is also involved in manufacturing chemicals under its chemicals division. The company engaged in the production of polymers, chemicals &fluids, and catalysts.

The polyisobutylene (PIB) manufactured under the chemicals division finds its application in manufacturing tires, bottle stoppers, conveyor belt, tank lining, sealant tapes, vibration control, hoses, gaskets, and condenser packaging. In March 2014, Exxon Mobil announced the expansion of the petrochemical refinery in Singapore for the production of Halo-butyl rubber and hydrogenated hydrocarbon resins. This expansion would increase the production capacity of the company to 140,000 tons per year.