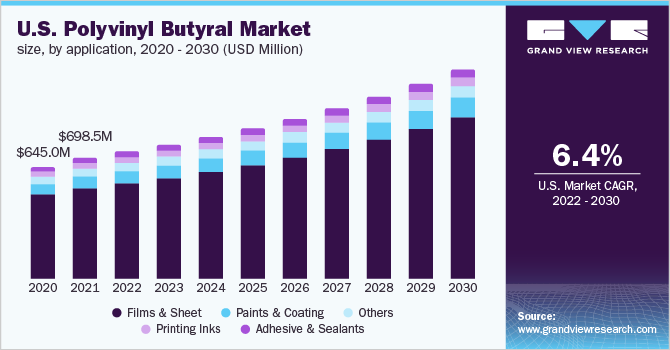 In November 2021, the U.S senate approved the infrastructure bill valued at USD 1.2 trillion which is expected to generate demand for construction services. This is expected to increase construction spending which further is likely to create demand for the polyvinyl butyral market during the forecast period. Capacity addition by the airports and railways is likely to fuel demand for laminated glass, which, in turn, is projected to boost the market growth.

In addition, the rising utilization of PVB-based adhesives and paints & coatings in various industries including paper, packaging, assembly, manufacturing, woodwork, and consumer products is expected to drive the market throughout the forecast period.

A positive outlook toward the automotive industry in China, India, Japan, South Korea, Malaysia, Indonesia, and Vietnam is expected to promote the utilization of polyvinyl butyral. The increasing population in China and India coupled with favorable government regulations, aimed at generating investments from public-private partnerships & foreign direct investments, are also anticipated to fuel demand for polyvinyl butyral during the coming years.

Increasing demand for PVB in the automobile industry, as a laminated glass protective interlayer, is expected to drive market growth. Increasing automobile production, mainly in China, Indonesia, Japan, Malaysia, and Taiwan, is anticipated to propel the demand for PVB in the automotive industry. Rapid urbanization along with high demand for SUVs and sedans is expected to propel the use of PVB in automobile applications. India is likely to witness a high demand for automobiles due to industrialization and government support for the manufacturing of vehicles.

The films & sheet segment dominated the Polyvinyl Butyral market with a share of more than74.0% in 2021. PVB films & sheets are utilized as an interlayer in the manufacturing of laminated glasses used in architectural and automotive sectors. Laminated glass is a type of safety glass that keeps the components intact even when broken. A PVB interlayer between the two or more layers of glass holds it in place. In the case of a collision, the interlayer keeps these two layers of glass linked, and PVB's great strength prevents the glass from shattering into very big, sharp pieces.

The growth in the industrial sector is expected to fuel the demand for PVB-based paints & coatings. Industrial sector is rapidly growing in the emerging economies of China, India, Mexico, South Korea, and Brazil. Rising population and improved living standards coupled with rapid urbanization are the factors driving the growth of the industries such as manufacturing, construction, FMCG, and transportation in developing countries. Growth of industrial facilities in the Asia Pacific and Latin America are expected to boost demand for the paints & coatings, which, in turn, will boost the market growth during the forecast period.

Adhesives are versatile products that find applications in the industrial and manufacturing sectors. The demand for these products continues to increase as manufacturers continuously seek improved performance of the bonding materials, substitute synthetic substrates for traditional materials, reduce the emissions of volatile organic compounds (VOCs), recycling, and aesthetic bonding solutions for various substrates. PVB is widely used in adhesives owing to its superior strength, adhesion, and binding properties in various environmental conditions.

The automotive segment dominated the market with a revenue share of more than 50.0% in 2021. PVB films offer protection of graphics, a long-lasting finish, and prevent the formation of bubbles on the surface. Laminated safety glass has been effective for windshields and is increasingly adopted to produce roof and side glass on luxury cars to reduce noise, and light transfer and increase safety. In addition, owing to less smoke generation and low flammability PVB film & sheets are utilized in the construction and automotive industry for safety. 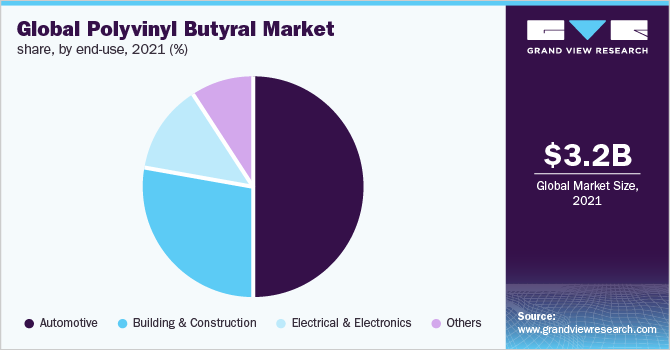 Increasing utilization of renewable sources of energy is expected to increase the utilization of PVB in the electrical & electronics industry. PVB films are economical and convenient for solar photovoltaic modules and encapsulation material which improves the UV protection and performance of the glass. Further, regulations on clean energy and a rise in demand for solar cells are anticipated to drive demand for the PVB in the electrical & electronics industry.

The Asia Pacific dominated the market with a revenue share of more than 33.0% in 2021. Industrial expansion in the Asia Pacific is anticipated to propel the demand for PVB-based paints, coatings, and adhesives in industrial machinery, equipment, and containers. Furthermore, ascending demand for fast-moving consumer goods in the region is likely to drive consumption of PVB-based inks and packaging materials. PVB is anticipated to witness increasing utilization in packaging applications owing to the ascending demand for laminated glass and adhesives by hospitals in urban & rural areas in emerging economies. 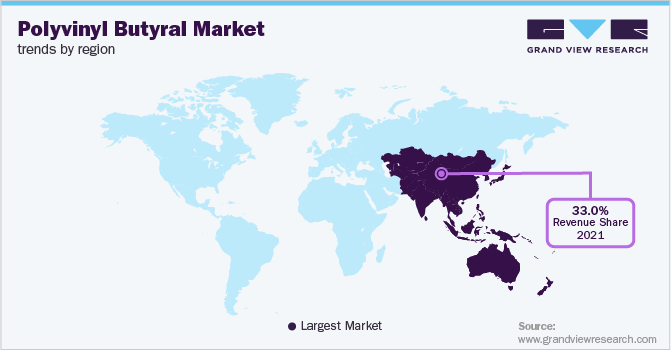 The global polyvinyl butyral market is fragmented as a large number of global and regional players are operating in the market. Key global players are facing acute competition from the regional players, who have robust distribution networks and an adequate understanding of the suppliers and regulations.

Major players in the market are involved in research & development for the production of superior-quality resins that provide improved features. Expansion activities are witnessed in the Polyvinyl Butyral market to carry out R&D activities related to polyvinyl butyral.

For instance, in March 2021, Eastman Chemical Company announced an investment to expand and upgrade its extrusion capabilities for the production of interlayer product lines at its manufacturing facility in Springfield, Massachusetts. This investment will positively impact the supply capability of Eastman Chemical Company on a regional and global level with respect to polyvinyl butyral products. Some of the prominent players in the global polyvinyl butyral market include:

This report forecasts revenue growth at global, regional, and country levels and provides an analysis of the latest industry trends in each of the sub-segments from 2019 to 2030. For this study, Grand View Research has segmented the global polyvinyl butyral market report based on the application, end-use, and region: 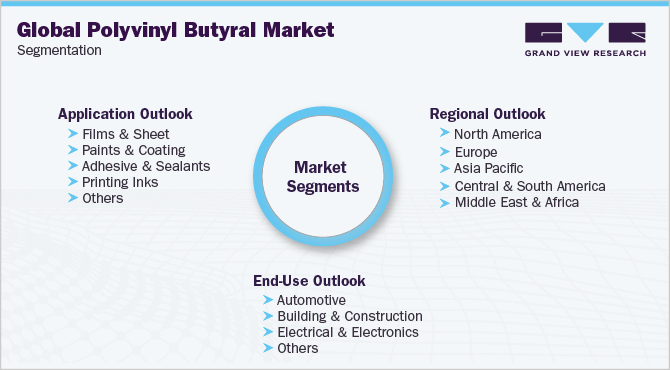 How big is the polyvinyl butyral market?

What is the polyvinyl butyral market growth?

Which segment accounted for the largest polyvinyl butyral market share?

b. The films & sheets segment dominated the polyvinyl butyral market with a share of 74.5% in 2021. PVB sheets & films are largely used for manufacturing of laminated glasses, which are widely used in the architectural and automotive sectors.

Who are the key players in the polyvinyl butyral market?

What are the factors driving the polyvinyl butyral market?

b. Key factors that are driving the market growth include the rising utilization of laminated glasses in residential and non-residential buildings as a result of its several properties such as durability, UV radiation, and weather resistance.