The global portable generator market size was valued at USD 3.9 billion in 2019 and is expected to register a compound annual growth rate (CAGR) of 5.2% from 2020 to 2025. Portable generators are designed to provide alternating current (AC-based) for non-hardwired and standalone applications. Increasing business downtime across the globe, owing to rise in weather-related power outages, has resulted in an increasing demand for uninterrupted power supply. This is a major factor in driving product demand.

Increasing adoption of portable generators owing to a rapidly growing construction industry is also propelling market growth. Power tools of all sizes, such as drills, drives, compressors, and air hammers, are widely used in the construction sector. Portable generators are used majorly for new construction projects, where most of the work is carried out at night and in conditions where power from power grids is not accessible. 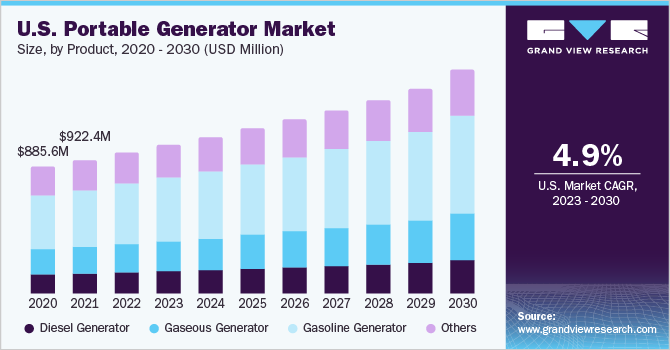 In the last few years, there has been a significant increase in the consumption of electric power in sectors such as oil and gas, automotive, aerospace and defense, IT and telecommunications, and agriculture. Moreover, the global demand for electricity is projected to increase by 57% from 2018 to 2050 owing to increased adoption of electric vehicles. Thus, high demand for uninterrupted power supply is expected to boost the market.

Increasing awareness of global warming has resulted in growing demand for portable generators based on biofuel, a sustainable energy source. Biofuel has chemical characteristics similar to that of petroleum-based fuels and hence, it can be used as a direct substitute for diesel fuel. Additionally, biofuel provides energy independence to countries such as Japan and Italy, which import petroleum and natural gas from other countries. Biofuels can be produced from soybean, canola, corn, used cooking oil, and animal fats. Rising demand for biofuel powered generators will provide an opportunity to market players over the forecast period.

Stringent environmental regulations for limiting carbon emissions are major factors restraining market growth. Portable generators are subject to federal, state, and local regulations regarding their emission performance. Environmental agencies such as the Central Pollution Control Board (CPCB) of India, U.S. Environmental Protection Agency (EPA), and the European Environmental Agency regulate the amount of carbon emitted into the atmosphere by generators. Additionally, every manufacturer, importer, and assembler of portable generators is required to possess a Type Approval Certificate for each generator.

The rapid growth of the construction industry bodes well for the portable power generators market. In the construction sector, all sizes of power tools such as drills, drives, saws, compressors, and air hammers are used. These tools need to be operated day and night for projects such as bridges, railways, and repairs of the transportation infrastructure. In such projects, it is not possible to provide a power supply from the grid. Therefore, the construction activities are carried out using temporary power sources such as uninterruptible power supply (UPS), inverter, and generators.

Carbon emissions is among the top ten risk associated with health risks worldwide. Portable and generators emit dangerous carbon monoxide gas, which can be deadly if inhaled. In addition, there is a growing concern for global warming among the governments around the world. As a result, diesel generators are subject to a slew of federal, state, and local regulations governing emissions performance and operating conditions. U.S. organizations such as California Air Resources Board (CARB) and Environmental Protection Agency (EPA) regulate the amount of carbon released into the atmosphere by devices that emit gases. Thus, aforementioned factors are expected to hinder the future growth of the market.

On the basis of product, the market is segmented into diesel and gaseous generators. In 2018, the diesel segment dominated the market as these variants provide advantages such as longer service life and the ability to withstand heavy loads. Moreover, diesel variants are the preferred option in industries such as construction, mining, and oil and gas owing to their enhanced fuel efficiency.

The gaseous segment accounted for a substantial share in the global market in 2018 owing to factors such as lower emission of harmful gases such as sulfur and nitrogen, compact size, and quick start. Additionally, regulations that limit the use of diesel generators are expected to drive the growth of the gaseous segment. For example, in October 2018, the Environment Pollution Control Authority announced a ban on the use of diesel generators in Delhi, India, making room for gaseous product variants.

On the basis of power range, the portable generator market has been segmented into low power (8 - 20 KW), medium power (21 - 370 KW), and high power (371 - 450KW). The low power segment dominated the market in 2018 as these product variants are widely used for residential and commercial purposes for powering air conditioners, water pumps, and refrigerators.

The medium power segment is expected to exhibit the highest CAGR over the forecast period owing to increasing adoption of these generators in the telecom industry. These products are to be mandatorily used by telecom operators for their tower systems as any downtime may lead to heavy financial losses. Medium power generators are also used in the healthcare sector, which is expected to significantly contribute to segment growth.

On the basis of end-use, the market is segmented into commercial, residential, and industrial. The industrial segment is further segmented into construction, mining, and oil & gas, among others, and dominated the overall market in 2018. This is owing to increasing infrastructure investment for construction of roadways, railways, and commercial parking spaces in countries such as the U.S., China, India, and South Korea. Moreover, growth of the manufacturing industry is expected to drive the industrial segment. 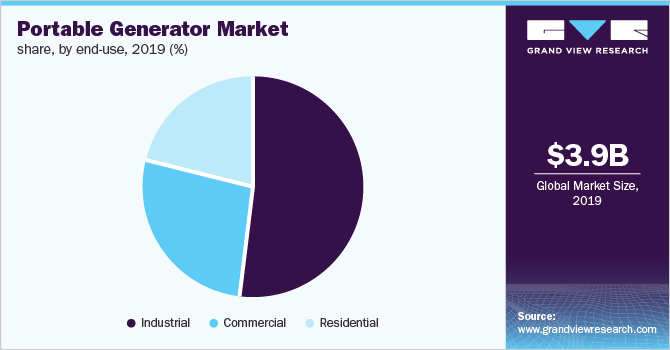 Countries such as China, Japan, and India are manufacturing hubs of consumer electronics. Additionally, there has been considerable growth in exploration activities carried out for oil and gas. All these factors are expected to boost demand for portable generators. The mining industry is also expected to significantly contribute to the growth of the industrial end-use segment.

Asia Pacific generated the highest revenue of USD 1.29 billion in 2019. Growth of the regional market can be attributed to increase in consumption of electric power by residential users in countries such as China and Singapore. In 2016, China accounted for the highest consumption of electric power of 5,129 terawatt hours for residential purposes, followed by the U.S. with 3,867 terawatt hours. The growth of manufacturing sectors in India and China is expected to have a positive impact on the growth of the Asia Pacific market. 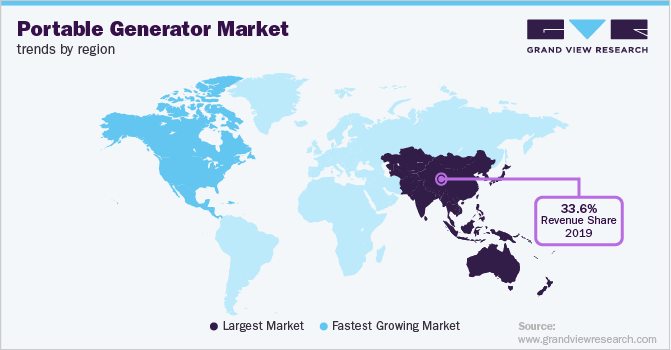 India and China have witnessed the establishment of large numbers of manufacturing facilities of some of the major automotive and consumer electronics manufacturers such as Volkswagen; Apple, Inc.; and Sony Corporation. Moreover, rising adoption of portable generators in small shops and for outdoor events in these countries is expected to further propel market growth. Increase in number of construction projects in the Middle East and Asia Pacific regions is a key factor driving the global market. Additionally, leading construction companies are focusing on acquiring new, green building projects and this is further driving product demand.

They are also focusing on expanding their geographical presence and production by acquiring smaller companies. For example, Kohler, Co. acquired Clarke Energy, a U.K.-based manufacturer of gasoline- and diesel-powered generators. Multiquip Inc. established a new facility at Carson for the production of portable generators in order to expand its manufacturing capacity.

This report forecasts revenue growth at global, regional, and country levels and provides an analysis of the latest industry trends in each of the sub-segments from 2014 to 2025. For the purpose of this study, Grand View Research has segmented the global portable generator market report on the basis of product, power range, end-use, and region: