The global prepreg market size was estimated at USD 5.3 billion in 2015 and is expected to grow at a CAGR of 10.0% over the forecast period. The growth can be attributed to the increasing product penetration in the aerospace and automotive industries. Growing demand for light and durable materials for the manufacture of aerospace components is expected to have a positive impact on industry growth over the next eight years.

Increasing use of the material for the production of lightweight blades for wind turbines is projected to fuel demand over the forecast period. Furthermore, presence of stringent regulations pertaining to the reduction of carbon emissions from vehicles and to improve the fuel economy of vehicles particularly in countries across North America and Europe is expected to propel product use in the automotive industry over the next eight years.

The rapidly growing need for lightweight materials for the manufacture of sports equipment for improved performance is expected to be one of the major driving force for prepreg over the forecast period. Nonetheless, high cost associated with the product as compared to its alternatives such as aluminum is anticipated to challenge the product demand.

Also, numerous difficulties faced by manufacturers in repair, as well as damage detection, is expected to hamper industry growth. Increasing R&D expenditure by numerous companies for the development of enhanced curing and manufacturing techniques is expected to have a positive impact on the industry over the next eight years.

Rising product demand from various applications such as automotive, sporting goods, wind, and military & defense on account of superior properties such as improved machinability, high strengths and shorter curing time is expected to fuel industry growth over the forecast period. Growing popularity among industries such as marine, and electronics owing to its enhanced mechanical properties is anticipated to open new market avenues for the product over the next eight years.

Hot-melt is the most commonly used manufacturing process, it accounted for over 70% of the segment in 2015. This technique is used for both unidirectional as well as fabric prepregs and hence is adopted by numerous manufacturers. Also, the cost-effectiveness of this process is expected to fuel its adoption over the forecast period.

Thermosetting resin holds the largest market share owing to its widespread use in aerospace, automotive, and marine applications. The growth of the automotive industry, especially in emerging economies of Asia Pacific, on account of growing disposable income and rising need for four-wheelers among consumers, is expected to propel product demand over the next eight years.

Thermoplastics including polyethylene (PE), polypropylene (PP), Polyether ether ketone (PEEK), polyethylene terephthalate (PET) and polyphenylene sulfide (PPS) are widely used in the production of prepreg. Temperature stability of thermoplastics have facilitated their utilization in the manufacturing of the product.

Thermoplastic resins are expected to gain significant share over the next eight years on account of its superior properties such as moisture and solvent resistance coupled with its fire-retardant nature. The segment accounted for USD 1.85 billion in 2015 owing to rising need for polymer composite molded parts primarily in the automotive industry.

Aerospace & defense dominated the application segment accounting for over 35% of global volume in 2015. Rising product use in the manufacturing of numerous aerospace parts including cargo and passenger floor panels, air ducts, ceiling panels, lavatories, overhead compartments, cabin linings, bars, seats, fins & winglets, and brackets on account of their lightweight nature is expected to fuel demand over the forecast period.

Defense spending has increased considerably in countries including the U.S., the UK, France, and Japan owing to high national security threats. Policies to strengthen the U.S. military sector has led to a sizeable increase in U.S defense budget. Furthermore, the global aerospace industry is expected to witness a surge in new aircraft production along with equipment replacement cycle.

Wind energy was the second-leading application segment with an overall share of 22.9% in 2015. Prepreg is widely used in manufacturing various components of wind turbines, owing to their high strength and fatigue resistance. It is used in wind turbine rotor blades. Tailing edge, spar caps, shear webs, and wind rotors are the key parts of wind turbines using prepreg. The wind energy sector requires turbines long, light and durable blades to improve efficiency. Increasing use of the material in wind turbines is expected to drive the segment growth over the next few years.

Carbon is the most widely used fiber type employed for the manufacture of prepregs owing to the advanced mechanical and chemical properties of the material such as excellent surface finish and low porosity. In addition, carbon fiber type prepregs can be stored at room temperature and are easier to handle and store. The segment revenue was valued at USD 3.53 billion in 2015 and is expected to witness substantial growth over the forecast period. 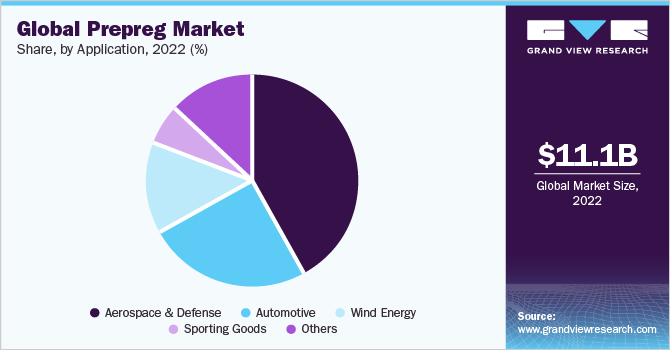 Asia Pacific is expected to be the fastest growing market growing at a CAGR of 9.7% during the forecast period with high need from the construction sector. South Korea is expected to show high growth in construction industry owing to private and public investments in commercial, industrial and infrastructure projects. This, in turn, will have a positive impact on the industry over the next seven years

North America and Europe were the largest markets in terms of volume accounting for above 55.0% share. Increasing need for environment-friendly products in Europe coupled with rising application scope is expected to open new avenues over the forecast period.

North America dominated the regional market 2015 with an overall share of over 39%, which can be attributed to the presence of a robust wind energy and aerospace sectors in the region. The wind energy market in North America is expected to grow at a significant rate over the next few years, which in turn is expected to fuel the product demand over the forecast period.

Furthermore, use of carbon fiber products for the production of wind turbines enables longer blade and more efficient designs, and also optimizes weight-to-stiffness ratio in longer blades. These benefits of the product are expected to fuel its demand in wind energy applications over the next eight years.

Asia-Pacific is expected to witness rapid growth over the next eight years on account of tremendous growth in wind capacity installations across key emerging economies, including India, China and Indonesia. China accounted for the largest share in the region owing to increased adoption of wind energy at a rapid pace.

In January 2016, Hexcel Corporation announced the introduction of its CFRP technology in the BMW7 series. The company supplies unidirectional carbon prepregs made from HexPly M77 resin system to BMW.

Furthermore, facility expansion has been a primary focus point for several key players, in recent years. In November 2015, Mitsubishi Rayon Co., Ltd. announced its plan to establish a plant at Vilshofen, Germany, to produce SMC (Sheet Molding Compound) intermediate materials, which could help the company in developing a wider range of quick-cure prepregs.