The global probiotics dietary supplements market size was estimated at USD 6,122.5 million in 2020 and is expected to grow at a compound annual growth rate (CAGR) of 7.0% from 2020 to 2028. The prevalence of digestive disorders is multiplying at a faster rate, which is expected to result in increased demand for probiotic products. Probiotics help in treating diseases, such as intestinal inflammation, urogenital infections, and antibiotic-associated diarrhea, by fighting against bad bacteria in the gut. Rising awareness levels among consumers toward preventive healthcare are likely to support the growth of the global market in the years to come. Probiotics help in enhancing immunity by improving gut health. Yogurt is a widely consumed source of probiotics. 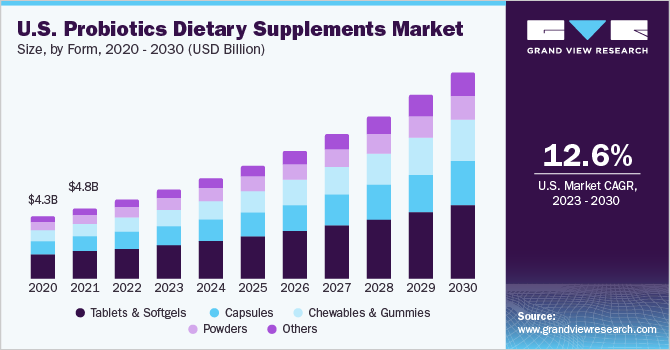 The demand for probiotics dietary supplements has been gaining momentum owing to the ease of consumption of supplement powders and chewable tablets. These products are offered in different flavors, such as apple, orange, and raspberry, which attract consumers. Streptococcus thermophilus is a commonly used lactic acid bacteria in probiotic supplements, which helps in regulating the digestive tract functioning and immune system response. Lactobacillus is another lactic acid-producing bacteria in supplements, which helps in regulating the digestive tract and is efficient in treating diarrhea, skin disorder, high cholesterol, irritable bowel syndrome, and lung infections.

Market players are focusing on developing new probiotic formulations based on beneficial bacteria that can address various health ailments. For instance, in June 2021, Lonza collaborated with Kaged Muscle, a sports nutrition company based in California. Under this collaboration, Kaged Muscle will introduce its sports supplements formulated with Lonza’s new probiotic ingredient, TWK10, in the U.S. market. TWK10 is a form of the probiotic strain L. Plantarum derived from Taiwanese kimchi, which is expected to increase exercise endurance by up to 75%.

On the other hand, higher product prices have been a challenge for market players. However, consumers are ready to pay more for better health, which is expected to support the market growth. A significant rise in health expenditure in developing economies, such as China, Russia, Brazil, and India, is also projected to boost product demand, thereby augmenting the market growth.

The capsules segment dominated the market with a share of more than 33.8% in 2020. Capsules, such as Capsugel DRcaps, have a modified release mechanism that is intended for targeted release of probiotics in the gut that increases its absorption efficiency compared to traditional capsules. The development of capsules that are effective in readily releasing their contents is expected to support the growth of the segment.

Powders are easy to consume for people having difficulties swallowing capsules or tablets. Thus, manufacturers are developing products in powder form that are readily mixed with water, juice, or milk. For instance, in November 2020, Beroni Group launched a new probiotic supplement Beilemei in the form of freeze-dried powder in China. It is formulated with 3 strains of Bifidobacterium and 3 strains of Lactobacillus and can be mixed with water or juice for consumption.

The chewables & gummies segment is estimated to register the fastest CAGR over the forecast period as products in the forms are sweet and easy to consume. Moreover, appealing colors, shapes, such as teddy bears, and flavors of gummies further drive the demand for products in chewables & gummies forms. Other forms, such as liquids or drops, are also increasingly being popular, particularly for infants, as these can be mixed with infant formula or milk as a supplementation.

Products development efforts for targeted delivery of tablets are expected to support the growth of the tablet segment. For instance, in January 2021, Wellbeing Nutrition launched plant-based 'Probiotic + Prebiotic' water-soluble tablets in India. The tablet uses ‘Delayed-Release Technology’, which enables the formulation to deliver the contents in the intestine effectively passing through the stomach acids without degradation.

The adults segment dominated the market with a revenue share of 52.7% in 2020. Rising cases of gastrointestinal problems in adults have pushed the development of probiotic supplements. For instance, in April 2021, Bausch Health launched its OTC probiotic supplement, ENVIVE in the U.S. It can be consumed daily by adults and aids in reducing the frequency of five gastrointestinal symptoms including diarrhea, constipation, gas, bloating, and discomfort.

Probiotic supplements for infants are commonly offered in powder or liquid forms, wherein the products do not have their own taste. These products therefore can be easily mixed with infant formulas, pumped breast milk, and other liquids that are fed to the baby. Customized product offering, specifically designed to match the metabolic and intestinal needs of infants, is expected to benefit the segment growth over the coming years. 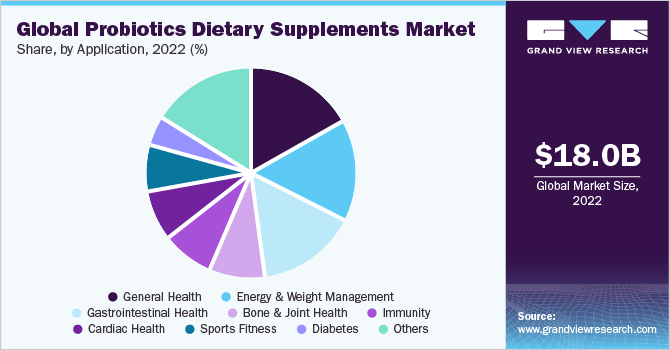 Players are focusing on offering probiotic supplements providing solutions to health concerns related to children. For instance, the Culturelle brand offers Culturelle Kids Ultimate Balance for Antibiotics, which are chewable tablets for children in the age group of 3 to 12 years. These are specifically formulated for kids who are facing digestive problems due to the consumption of antibiotics. Antibiotics can kill good bacteria in the gut and thereby create bacterial imbalance.

Reported cases of deaths due to intestinal inflammation and other irritable bowel disorders, such as Crohn’s disease and ulcerative colitis, have been rising among the older population in the recent past. The consumption of probiotic dietary supplements helps combat such issues among the geriatric population. This is expected to drive the product demand from the geriatric end-user segment.

North America emerged as one of the most prominent regional markets accounting for a revenue share of 39% in 2020. North America has a vast population facing rising cases of obesity and digestive distress on account of their dietary habits. As per GI Alliance, about 62 million American population is diagnosed with a digestive disorder yearly. Thus, the rising prevalence of digestive diseases is expected to fuel probiotics demand.

Europe is expected to grow at a significant CAGR of 6.3% over the forecast period owing to the rising adoption of supplement products. For instance, as per Synadiet Survey 2020, about 36% of the surveyed population in France consumed food supplements and natural health products to boost immunity after the emergence of COVID-19. The survey stated that after the first wave of COVID-19 infection, about 17.0% of the surveyed population used probiotic supplements

Asia Pacific is likely to register the fastest CAGR from 2020 to 2028. The players are focusing on enhancing the efficiency of their products using advanced technologies to gain a strong market foothold. For instance, in April 2021, Cosmax NBT, a South Korea-based supplements company, developed Zeta Probiotics Technology. The technology enables restoring the cell wall of probiotic microbes after passing through the freeze-drying process and, thereby, improves viability and adhesion of probiotic strains in the intestine.

The product demand in Central & South America is primarily driven by the rising governmental initiatives for health and nutrition in countries, such as Brazil. For instance, in June 2021, Bioresearch Life, a Spanish company, received approval for the commercialization of two probiotic strains from the Brazilian Health Regulatory Agency (ANVISA). This is expected to increase the development of new probiotic products in the country boosting the market growth.

The major business players in the industry invest extensively in R&D to expand their product portfolio and focus on developing new formulations with superior properties to meet the growing demands. For instance, in January 2021, DuPont Nutrition & Biosciences launched HOWARU Calm probiotic strain. HOWARU Calm can be used in dietary supplements intended to be used for promoting mental well-being and reducing perceived stress. Players are also focusing on partnerships and expansion strategies to strengthen their foothold in the global market. For insane, in June 2021, Probi partnered with Oriflame to develop probiotic supplements. The new formulation will be prepared with a scientifically-proven probiotic strain that enhances general gut health, which is based on Probi’s concept called Probi Digestis. Some prominent players in the global probiotics dietary supplements market include:

This report forecasts revenue growth at global, regional, and country levels and provides an analysis of the latest industry trends in each of the sub-segments from 2017 to 2028. For the purpose of this study, Grand View Research has segmented the global probiotics dietary supplements market report on the basis of form, end user, and region:

How big is the probiotics dietary supplements market?

What is the probiotics dietary supplements market growth?

b. Capsules segment dominated the market with a share of nearly 33.8% in 2020 owing to its increasing development of capsules made with targeted delivery of contents.

Who are the key players in the probiotics dietary supplements market?

What are the factors driving the probiotics dietary supplements market?

b. The key factors that are driving the global probiotics dietary supplements market include the rising prevalence of digestive disorders, increasing focus towards preventive healthcare, and growing consumer spending on health and wellbeing.