The global PV inverter market size was valued at USD 9.31 billion in 2021 and is expected to expand at a compound annual growth rate (CAGR) of 6.2% from 2022 to 2030. The energy demand has been growing year on year, which in turn, is driving the need for different renewables such as solar energy and equipment. Since the downturn in gas prices in the year 2014, alternative energy, especially wind and solar have been placed on the backburner and the trend has reverberated across numerous industries. 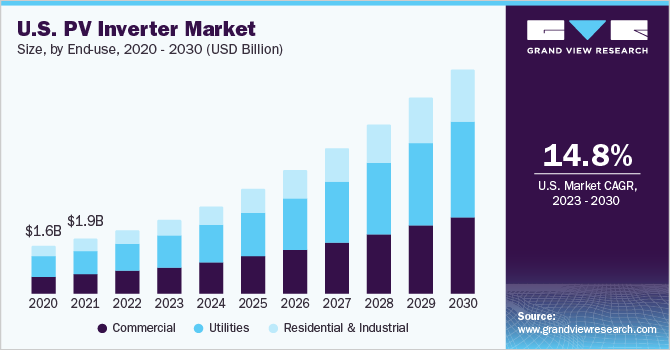 The U.S. emerged as the largest market in North America in 2021. It is a significant market for different types of PV inverters. Some of the recent inverter trends in the U.S. include an increase in sizes of central inverters (1.5 MW plus) and three-phase string inverters (60 kW). Though the U.S. has witnessed steady growth for string inverters, the central inverters are anticipated to maintain their hold of the market share.

The value chain of solar inverters is considerably complex and comprises component manufacturers, inverter manufacturers, distributors, sellers, and end-users. Different components of the solar value chain account for different revenue generation as the significant portion constitutes panels followed by inverters and batteries. The value chain complexity offers little room for technical differentiation of solar devices as the efficiency of these devices is relatively high.

Solar PV inverters are an integral part of the whole solar system. These inverters convert the DC electricity to the alternate current and hence determine the efficiency of the whole solar system. Solar PV inverters are available in distinct characteristics and features and take into account different factors affecting solar system production. Some of the critical factors include shading, roof orientation, roof inclination, summer vs winter production, tilting panels, and many other factors that result in the required output.

Renewable power generation cost has witnessed a very steep decline and in the current scenario are very competitive to meet the need for new capacity. For instance, solar photovoltaics have resulted in a decrease of approximately ~72% for the Levelized Cost of Electricity (LCOE) which is one of the highest cost reductions compared to other renewable energy technologies such as wind. This fall in the prices of solar power generation came with the reduction of installation costs for solar modules, cells, inverters, and related equipment.

The COVID-19 pandemic has resulted in hindering the market growth of PV inverters globally owing to factors such as disruption in the supply chain. Further, demand has been reduced for the PV inverter from residential and commercial end-users due to restricted new construction activities and due to the diversion of available funds by residential and commercial end-users to sustain during the COVID-19 pandemic.

In terms of revenue, the utilities segment led the PV inverter market in 2021, accounting for a revenue share of around 44.0%. The most widely used PV Inverter in the utility sector is the central & string inverter. Increased renewable energy demand, declining cost of solar power & equipment, and emerging government subsidies are primary reasons for the growth of the utility sector. The presence of key players, providing consumers with industry-leading utility-scale solutions to achieve higher efficiency and reduced balance-of-system costs with their pre-integrated power stations is driving the growth of the segment.

Based on end-use, the market has been segmented into commercial, residential & industrial, and utilities. The residential end-use segment has witnessed growth on account of the increased demand for solar renewable energy among consumers for electrification purposes. Governments in various countries have taken active steps with policies and financial incentives to promote captive power generation through renewable sources such as power in residential buildings. Commercial buildings include malls, retail stores, offices, hospitals, and schools that are installing solar power systems for captive consumption. These sectors require a continuous supply of electricity for their uninterrupted functioning.

In terms of revenue, central inverter accounted for the largest revenue share of over 49.0% in 2021. These inverters are highly reliable with timely maintenance and are housed in a protected location for their installation. The inverters are integrated with large arrays installed on field installations, industrial facilities, and buildings, taking DC power from all the PV panels and converting it into AC power becoming a single point for power distribution. 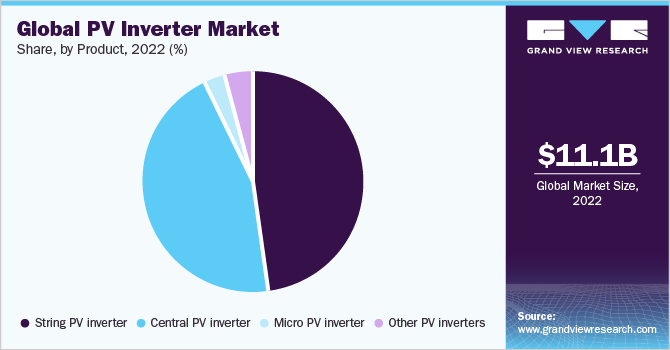 The string inverter segment occupied the second largest market share in 2021. The string inverter is mainly used in commercial and residential sectors. Lower initial cost and easy installation are among the primary factors responsible for the segment growth. These inverters are robust, allow for high design flexibility, deliver high efficiency, offer three-phase variations, are well-supported (with trusted brands), and have remote system monitoring capabilities.

The micro PV inverters segment is projected to witness a substantial growth rate over the forecast period. Micro PV inverters are module-level electronics and have become a popular choice for commercial and industrial sectors. These inverters have the advantage of high reliability, increased efficiency & performance through Maximum Power Point Tracker (MPPT), ease of installation, no space constraints, and are cost-effective.

The Asia Pacific is expected to account for the largest revenue share of over 43.0% over the forecast period. China is the largest contributor to the rapid growth of this region’s solar market and is also a major global competitor. A growing number of solar installations in developing nations has also significantly contributed to the growth of the market in the region.

North America occupied a significant revenue share in 2021, with the U.S. being the major contributor to the market growth. The U.S. is a prominent market for different types of PV inverters. Some of the recent inverter trends in the country include the dominance of 60 kW plus capacity three-phase string inverters and 1.5 MW plus capacity central inverters. Though North America witnessed sturdy growth for string inverters, the central PV inverters are expected to maintain the largest market share over the forecast period.

Europe is expected to witness a significant CAGR over the forecast period owing to the presence of favorable government policies and the provision of subsidies such as residential feed-in tariffs (FITs) that encourage customers to invest in renewable energy. Germany holds a leading position in the manufacturing of solar inverters in tandem with the hi-tech nature of the inverters. German solar companies thus pose a competitive advantage over other players.

The market is highly competitive and consolidated due to the presence of a large number of market players. The dominant trend in the operations of these solar companies includes vertical integration which defends against the market power and reduces competition. Technology sourcing, skilled manpower, and strong R&D are among the significant factors governing the competitiveness of the PV inverters industry. In March 2020, the Fimer group acquired ABB’s solar inverter business, making the company the 4th largest solar inverter manufacturer across the globe. This acquisition strategy will help the company to boost its presence globally. Some prominent players in the global PV inverter market include:

This report forecasts revenue growth at the global, regional, and country levels and provides an analysis of the latest industry trends in each of the sub-segments from 2019 to 2030. For this study, Grand View Research has segmented the global PV inverter market report based on product, end-use, and region:

How big is the PV inverter market?

What is the PV inverter market growth?

Which segment accounted for the largest PV inverters market share?

b. The Asia Pacific led with over 43.33% of market share in terms of revenue in 2021. This can be directly attributed to the commissioning of several grid-scale solar farms throughout the region, especially in China and India. Government subsidies and purchase incentives have played the primary role in driving installations of solar power in the region.

Who are the key players in the PV inverter market?

What are the factors driving the PV inverter market?

b. The demand for solar PV inverters is primarily driven by increased demand for solar energy and renewable power generation. Solar energy is expected to dominate new capacity additions in the renewable sector globally, by 2020; where projects larger than the capacity of 5 megawatts will hold over 60% of the global market.