The global renewable power generation market demand was estimated at 6890.7 TWh in 2019 and is expected to grow at a compound annual growth rate (CAGR) of 7.9% from 2020 to 2027. Growing worldwide energy crisis has stimulated the need for sustainable energy and power generation. Various conventional energy sources, such as fossil fuel, are increasingly being replaced by renewable sources, such as wind energy and solar energy. These renewable sources of energy not only produce energy in the most efficient manner but also have a minimum adverse environmental impact. Numerous governments throughout the world have framed various regulations regarding the reduction of greenhouse gas emissions. The Kyoto Protocol, introduced by the United Nations Framework Convention on Climate Change (UNFCCC) in 1997, was one of the first major steps toward controlling greenhouse gas emissions in various countries. 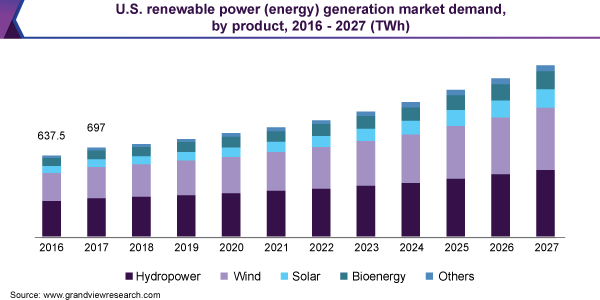 Issues such as carbon emissions and environmental protection are garnering attention at the global level. Subject to these issues, the generation of power through the energy of the sun and wind is gaining significant popularity. The solar panels that are manufactured are efficient and cost-effective, thereby increasing their demand and subsequently the installation of solar panels for residential as well as commercial applications.

Switching from non-renewable fossil fuels to renewable sources is important to achieve economic, social, and environmental developments. Moreover, such investments in renewable and clean resources sectors are estimated to generate commercial opportunities as well as new jobs. According to the Clean Jobs America 2019 Report, renewable energy employment was estimated to add 6% of new job opportunities in the U.S.

Hydropower emerged as the largest product segment in 2019 and is expected to reach 7,682.3 TWh by 2027. Increase in the construction of individual power plants is expected in remote regions with hilly terrain because no connections can be made from the main power supply network. These hydropower projects meet the power supply requirements without the need to expand the power grid in remote regions. Increasing focus on environmental protection is anticipated to increase the importance of electricity generation from decentralized renewable power generation, such as hydropower, in the forecast period.

The cost of wind energy has witnessed a steady decline over the past few years. This can be attributed to growing demand for clean and sustainable energy from developed countries. Wind power has become a major source of electricity generation in several countries, including Denmark, Finland, Norway, and Poland. Biomass power is one of the niche resources that has marked its presence in Europe and Asia Pacific. Growing consumer awareness regarding the environmental impact of petrochemical-derived fuels has driven the investments in developing alternative energy sources. Investment in bioenergy technologies has witnessed significant growth over the past few years in Asia Pacific. Recent changes in carbon emission targets can be attributed to such dramatic growth in the bioenergy sector in the renewable energy generation market. 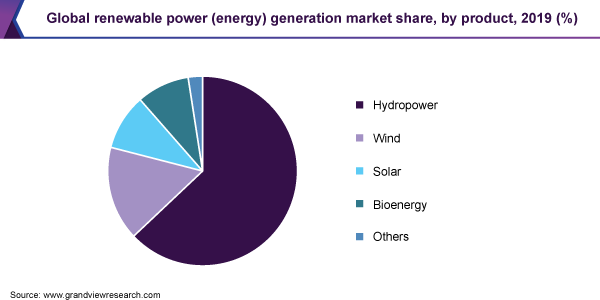 Other renewable power generations include marine power and geothermal power generation. With the evolution of renewable energy, ocean energy is emerging as a substitute in the market, which may contribute to the promotion of efficient products and technologies and the development of the existing renewable resources to provide clean energy. At present, ocean energy accounts for a small percentage of the overall renewable energy supply and operates only in selective regions globally, especially in Europe and North America.

Asia Pacific held the largest share in 2019 and is projected to be the fastest-growing regional market with a CAGR of 8.6% from 2020 to 2027. Growing population, especially in China and India, supports the increase in power consumption. With the growing population, demand for basic energy requirements, such as electricity, transportation, and fuel for cooking, has been increasing. A majority of the chemical manufacturing companies have been shifting their manufacturing facilities to China and India owing to favorable government policies in the form of tax benefits and increased investments through FDI. Such initiatives are anticipated to drive the regional market for renewable power generation.

Some of the major countries around the world such as the U.S., China, Germany, and Canada have already made supporting regulations and provided financial incentives for the deployment of renewable energy. Financial incentives such as feed-in-tariff, subsidies, and tax benefits are some of the major tools utilized by countries around the world to attract investment in the renewable power generation market. For instance, in 2015, India has pledged to install 175 GW of renewable power generation sources in its power sector by 2022.

As per the National Renewable Energy Action Plans (NREAPs), the combined capacity target in the European countries, in which ocean energy technologies are currently being developed, is likely to reach 2253 MW by the end of 2020. Some European countries such as Portugal and the U.K. have adopted economic policy instruments to encourage the deployment of prototype devices involving the distribution of market incentives, such as prizes. According to the IEA Energy R&D statistics, within Europe, the largest ocean energy RD&D expenditure related to total renewable energy R&D spending can be found in U.K. (13.4%); Ireland (12.4%); and Sweden (12.1%).

Companies in the market are likely to invest in research & development activities. Associations also actively participate and contribute to the tactical initiatives for new product development. Capacity growth and government tie-ups are predominant in the industry. The market trend signifies notable expansion and acquisition activities. The market for renewable power generation has witnessed an increase in the number of companies in recent years. The companies are constantly making significant efforts to advance their technologies and deploy novel and improved devices. The deployment of these projects poses great financial risks and demand high upfront costs, which are the major perennial challenges faced by the players. Some of the prominent players in the renewable power generation market include:

This report forecasts volume growth at the global, regional, and country levels and provides an analysis of the latest industry trends and opportunities in each of the sub-segments from 2016 to 2027. For the purpose of this study, Grand View Research has segmented the global renewable power generation market report on the basis of product and region:

How big is the renewable power generation market?

What is the renewable power generation market growth?

b. Asia Pacific held the largest share of 60.7% in 2019 as a large number of manufacturers are based in Japan and the region also witnesses high demand for solid oxide fuel cell.

Who are the key players in renewable power generation market?

What are the factors driving the renewable power generation market?

b. Key factors that are driving the market growth include growing worldwide energy crisis has stimulated the need for sustainable energy and power generation.