The global Real-time PCR (qPCR) and Digital PCR (dPCR) market size was valued at USD 2.25 billion in 2018. It is expected to expand at a CAGR of 8.5% during the forecast period. High prevalence of target diseases and rapid technological advancements such as development of high performance and superior qPCR and dPCR systems are expected to be the key factors driving the growth.

According to the World Health Organization (WHO), cancer was among the leading causes of death responsible for 9.6 million deaths globally in 2018. The WHO estimates that 36.9 million individuals were infected with HIV in 2017. It also reported that infectious diseases were among the top causes of deaths worldwide in 2016. The rising cases of these diseases is anticipated drive the market in near future. 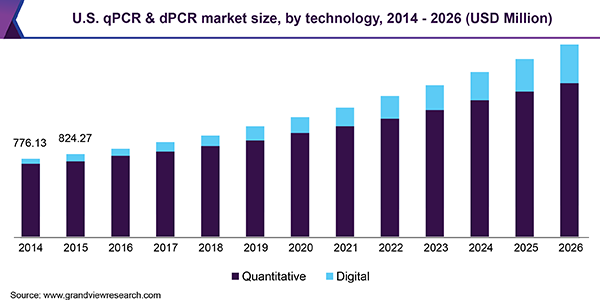 Moreover continued efforts by PCR manufacturers to develop novel systems and kits to use in molecular testing is likely to further propel growth of the qPCR and dPCR market. For instance, in January 2019, QIAGEN N.V. announced its plans for the development of next-generation dPCR systems, anticipated to be launched in 2020. The new systems are expected to offer highly automated workflows and quicker turnaround time as compared to current digital PCR platforms which are likely to provide significant competitive advantage to the company.

In addition, a broad range of application of qPCR and dPCR technologies is expected to further boost the adoption in array of scientific disciplines. The technologies have wide-ranging applications in both basic and diagnostic research. They have been extensively used in areas, such as human genetic testing, forensic sciences, pathogen detection, and infectious disease testing. Expanding application in food microbiology and veterinary medicine among other industries is expected to further fuel the market.

Based on technology, the Real-time PCR (qPCR) and Digital PCR (dPCR) market is segmented into quantitative and digital. Quantitative PCR held the largest market share in terms of value in 2018. Continued demand in areas such as genetic variation analysis, gene expression analysis, and genotyping along with increasing focus on the development of Point of Care (PoC) platforms is anticipated to drive the segment.

Digital PCR is a next-generation testing method which helps precise quantification of nucleic acids. These systems offer superior sensitivity and accuracy compared to other PCR-based approaches, which is anticipated to help the segment register robust growth during the forecast period.

On the basis of product, the market is segmented into consumables and reagents, instruments, and software and services. The consumables and reagents was the leading segment accounting for the largest market share in terms of value in 2018. The segment is projected to witness strong growth rate as compared to other segments owing to launch of new PCR test kits.

For instance, in October 2017, AOAC INTERNATIONAL, an independent standards developing organization certified Bio-Rad Laboratories iQ-Check (Real-Time PCR Kit) as the Official Method of Analysis for Salmonella species detection in raw meat. The validation paved the way for use of the kit in a range of industrial applications in the meat industry.

On the basis of application, the market is segmented into research, clinical, forensic, and others. Research application was the dominant segment in 2018. qPCR and dPCR systems are widely used for research applications such as stem cell research and genetic disease and oncology research. 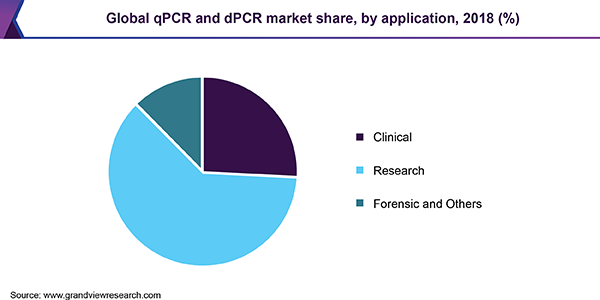 The wide-spread use of these systems is attributed to features such as enhanced specificity and quicker turnaround time. The clinical application segment is estimated to register the fastest CAGR of 8.7% during the forecast period due to increasing adoption of automated processes.

North America led the regional segment in 2018, attributed to launch of new systems and test kits by the PCR manufacturers. For instance, in September 2018, Thermo Fisher Scientific Inc. launched VetMAX MastiType, a qPCR-based test kit used for rapid detection of mastitis-causing pathogens in the dairy herds. Moreover, strong presence of major PCR manufacturers in this region coupled with increasing demand for rapid diagnostic tests is also expected to drive the regional growth over the forecast period.

Asia Pacific is likely to witness the fastest a CAGR of 11.1% during the forecast period. Rise in the patient pool owing to high prevalence of chronic and infectious diseases coupled with increasing awareness among patients about early diagnosis of these diseases is anticipated to boost the demand for PCR products, in turn driving the growth of the market.

Major market players have been consistently focusing on deploying strategic business measures to maintain their competitive position. The key measures adopted by the players include new product launches, entering into collaborations and partnerships with institutes and companies, and merger and acquisitions.

This report forecasts revenue growth at global, regional, and country levels and provides an analysis of the latest industry trends in each of the sub-segments from 2014 to 2026. For the purpose of this study, Grand View Research has segmented the global Real-time PCR (qPCR) and Digital PCR (dPCR) market report on the basis of technology, product, application, and region: