China accounted for approximately 16% of the global construction market in 2011 and is expected to overtake the U.S. to become the largest market by 2020 to capture more than 20% of total market revenue. On the other hand, India is also expected to become the third-largest market for construction overtaking Japan by 2020. Besides, Brazil is set to host the FIFA World Cup in 2014 and the Olympics in 2016, which has resulted in a huge surge in construction.  Demand for rigid polyurethane foams in the U.S. and Europe took a hit during the global economic downturn and had been on a slow path to recovery since then. 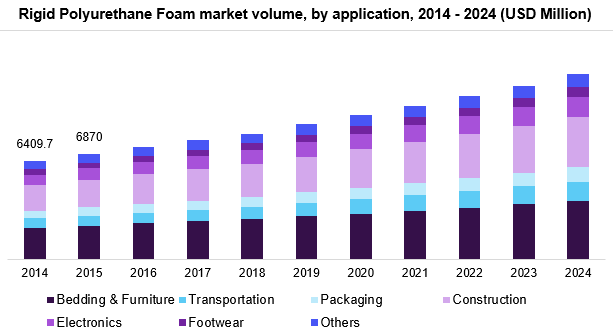 However, government support for the usage of rigid polyurethane foams in refrigeration applications is expected to boost market demand over the forecast period. Rigid polyurethane foams meet standards set by ASHRAE (American Society of Heating, Refrigerating and Air-Conditioning Engineers) for refrigeration application and have given a boost to its demand in the U.S. However, volatility in MDI/TDI (basic raw materials for polyurethane) prices on account of volatility in prices of benzene and crude oil is expected to hinder the market growth over the forecast period. Also, overcapacity mainly due to rapid capacity expansion in China has been putting pressure on the prices of polyurethane.

Flexible foam is light and durable and can be given a variety of shapes. The demand for rigid and flexible foams is gradually increasing owing to the regulations regarding PU foams and energy-efficiency. This growth could be attributed to the emerging auto-manufacturing sector and the requirement for sophisticated infrastructure.

Rigid foams are remarkably strong and can withstand high duress, along with waterproofing properties which makes them ideal for packaging applications and electrical cable jacketing. These foams have a higher density as well and can be utilized to absorb great impact, which is likely to promote their demand in the automotive and transportation sectors as well. 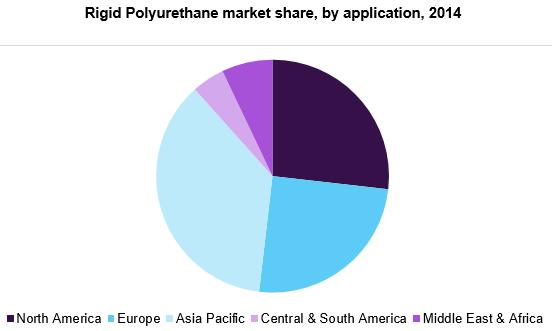 Molded foam parts formed the third largest rigid PU foam consumed globally and accounted for just over 20% of the total market in 2012. The global market for molded foam parts is expected to exceed 1,100-kilo tons by 2020 at an estimated CAGR of 5.1% from 2013 to 2020.

Asia Pacific emerged as the leading consumer for rigid PU foams and accounted for over 40% of total volume in 2012. The rapid growth of the construction industry mainly in China and India on account of growing disposable income in the nation is expected to be a key factor driving the demand for PU foams in the region. Along with being the largest consumer, Asia Pacific is also expected to be the fastest-growing market for rigid PU foams at an estimated CAGR of 6.2% from 2013 to 2020. Government support to boost infrastructure and construction activities is also expected to fuel the demand for PU foams in the Asia Pacific.

Also, Asia Pacific is the largest producer of PU foams on account of favorable government policies and relaxed regulatory scenarios which has prompted major PU manufacturers to focus on developing Asia Pacific as a hub for PU manufacturing. The Asia Pacific was followed by Europe, which accounted for just over one-third of the total volume consumed in 2012. The demand for PU foams witnesses a dip during 2008-09 on account of the global economic recession which was followed by the European debt crisis. However, the demand for PU foams is expected to stabilize soon owing to the growth of the construction industry mainly in Eastern European countries such as Russia and Poland. North America emerged as the third-largest market for rigid PU foams and accounted for over 18% of the total market in 2012. North America and Western Europe are fairly mature markets for PU and are expected to grow at a relatively sluggish rate over the next six years. The North American market for rigid PU foams is expected to exceed a market worth USD 4 billion by 2020. Apart from these major economies, Brazil and Argentina have been identified as the future markets for rigid PU foams.

The global rigid polyurethane foams market is led by top polyurethane manufacturers such as Dow Chemical, BASF, Bayer Material Science, and Huntsman Corporation, indicating significant vertical integration in the industry. Major manufacturers from the west such as BASF, Dow Chemical Company, and Huntsman have been shifting their focus towards getting in proximity with the high-growth Asian market by opening up manufacturing facilities mainly in China and India on account of low manufacturing cost.