The global screenless display market size was USD 885 million in 2013. The technology aims at transmitting information without the help of a projector or screen. Visual image systems project visual information directly into the open space. Holographic systems, automotive HUDs, and smart glasses are all part of visual image systems. Retinal direct systems project content directly onto the retina; these include virtual reality headsets and goggles such as the Avegant Glyph. Synaptic interface systems transmit visual content directly to the brain through invasive brain-computer interfacing. 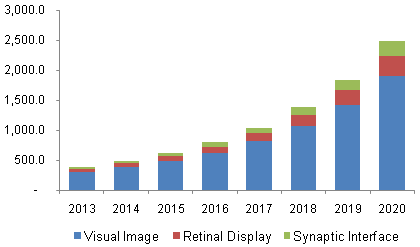 The screenless display industry has gained traction over the past few years owing to increased demand for portability and growing popularity of holographic projections. Presently, large keyboards can be projected on any surface to ease user interaction. For instance, the Celluon EPIC, which projects a full-size keyboard on any flat surface. Numerous companies have made notable breakthroughs in the field, including the development of mobile phones for the partially blind, blind and elderly people, hologram-like videos, bionic contact lenses, and virtual reality headsets. The launch of Google Glass is one such step towards utilizing the technology in daily use across different industry verticals.

One of the major drivers responsible for the steep growth of this technology is the constraint of space on screen-based devices. Low power requirement, low cost, wider angle of view, and greater portability are some other drivers for the development of this technology. However, lack of awareness and privacy concerns may restrain screenless display market growth. Technology innovation based on consumer preferences eases the adoption of such devices. Optimization of space and the need for portability serve as key growth opportunities for R&D.

Visual image systems dominate the global industry owing to the sizable share of holographic systems. Holograms are 3D images that are formed by the deflection of light. Holographic systems are widely popular among events, advertisements, and promotion applications. The technology is mature and inclined towards consumer electronics gadgets. Increased demand for holographic systems in medical and healthcare imaging is expected to boost growth over the forecast period.

Augmented reality & virtual reality is another field where the technology can be harnessed extensively. The increasing popularity and consumer adoption of VR headsets are expected to boost demand for the technology. Reduction in the size of devices and growth of the smart glass market also serve as major growth avenues for virtual and augmented reality applications. Other applications mainly include medical imaging scanners, which utilize holographic systems for Computed Tomography (CT), ultrasound, and Magnetic Resonance Imaging (MRI). RealView Imaging, an Israeli-company offers 3D holographic interfaces for medical imaging applications.

Technology development is being carried out at the Massachusetts Institute of Technology’s Media Lab. The popularity and demand for Google Glass have been significantly high since its consumer launch in April 2014, especially in developed economies such as the U.S.

Changing consumer preferences and growing technological advancements are expected to surge demand for the technology in Asia Pacific. The North American market dominated the global industry and this trend is expected to continue over the forecast period owing to the presence of a myriad of industry players in the region.

Companies with significant screenless display market share include Google, Displair, Avegant, and Vuzix. The Google Glass is a wearable device with an optical head-mounted display that showcases images along with information about the objects in front of the user. Displair has implemented the technology into a floating screen, which uses humidified air or fog to create interactive screens. Avegant is in the process of developing a retinal display product, the Avegant Glyph.