The global shock sensor market size was valued at USD 583.7 million in 2018 and is expected to register a CAGR of 17.2% from 2019 to 2025. The market has witnessed considerable growth over the past few years owing to the increasing use of shock sensors in various end-use industries. Sectors such as aerospace, automotive, and consumer electronics have witnessed increased usage of these devices over some time. Additionally, the growing number of smart city projects, product innovations, and frequent use of shock sensors in the transportation of goods and manufacturing plants are some of the factors expected to enhance the growth prospects of the market over the forecast period.

The rapid growth of the retail sector has also led to increased use of these sensors in this sector. Shock sensors are also used as glass-break sensors in residential and commercial buildings, burglar alarms, and automobiles to trigger an alarm in the event of forced entry. The multiple uses of these sensors in the consumer electronics segment are expected to further drive the sales of these products. A notable feature that has become popular is the integration of data recorded by shock sensors and other sensors in a multi-environment set up to provide opportunities for Product-as-a-Service (PaaS). 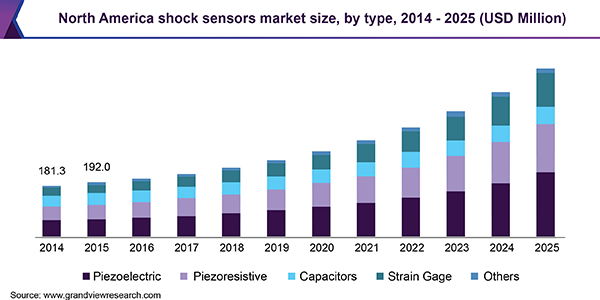 In case a machine in an industrial plant starts malfunctioning and the vibrations and shocks surpass the predetermined levels, the sensors trigger an alarm for similar potential problems in other machines located in the plant. This creates opportunities for providing a maintenance case package and guaranteeing machine revival in minimal time as add-on additional services for extra charges. For instance, ABB’s multi-sensor ecosystem also functions as a PaaS and includes different sensors attached to the machine motor. ABB’s cloud-based processing system runs, tracks, and monitors data to determine a machine’s longevity and also re-greases it for smooth functioning, thereby reducing the downtime considerably.

Shock sensors are also used as visual labels while shipping goods from one destination to another. These are usually placed on fragile packaged equipment and the visual labels act as indicators when the goods are in transit. These indicators change color if the fragile equipment is scratched or damaged during shipping. This immediately signals the end-users and helps them claim insurance for the damaged goods.

A large number of other industrial manufacturers have started including these visual labels as an indispensable component attached to their packaged goods. The growing use of smartphones and personal computers over the last few years has also positively influenced the market growth. Most of the established manufacturers offer remote monitoring and proactive maintenance services to enable companies to track machine functioning, identify technical problems, and schedule maintenance either through smartphones or computers. These services significantly reduce the probability of unexpected machine breakdowns and enable companies to increase system uptime.

Based on type, the shock sensor market has been classified into piezoelectric, piezoresistive, capacitors, strain gage, and others. The strain gage segment is expected to witness steady growth over the forecast period. This can be attributed to the fact that strain gage sensors function better in a multi-sensor setup and also as a primary sensor as and when deemed necessary. They record shocks and vibrations that are not accurately captured by other systems or sensors in a network.

The strain gage segment is anticipated to emerge as the fastest-growing segment over the forecast period, especially in the North American and Asia Pacific regions. The growth of the segment can also be attributed to the improved properties and functional features of these sensors. The piezoelectric sensors segment is also anticipated to witness growth over the forecast period owing to the large-scale use of these sensors for measuring vibrations or shocks and advantages such as inherent ruggedness and easy adaptability. These sensors are either made of polycrystalline ceramic material or crystalline quartz to sense changes in the vibrations that occur due to constant mechanical stress on equipment.

Based on the material used for manufacturing shock sensors, the market has been classified into tourmaline, quartz, salts, and gallium phosphate. Quartz is the most abundantly available, natural material used for manufacturing sensors. It is a highly preferred material owing to its ruggedness and inertness to chemical reactions. These properties of the material are expected to drive the growth of the quartz segment over the forecast period.

Tourmaline is the most preferred material for manufacturing shock sensors used in underwater explorations. Gallium phosphate is a synthesized chemical used for manufacturing shock sensors that typically operate at an approximate temperature of 10000C in hazardous environments. Thus, the gallium phosphate segment is expected to witness higher growth over the forecast period. The segment is anticipated to emerge as the fastest-growing segment over the forecast period, especially in the North American and Asia Pacific regions.

Based on end-use, the market has been segmented into automotive, aerospace, industrial, consumer electronics, and others. The automotive segment dominated the global market in 2018, followed by the aerospace and industrial segments. The use of these sensors in the aerospace segment, particularly, in North America and Asia Pacific regions, is expected to increase over the forecast period. The increase in defense budgets and the use of shock sensors in updating military equipment are driving the demand for these sensors in the aerospace segment. 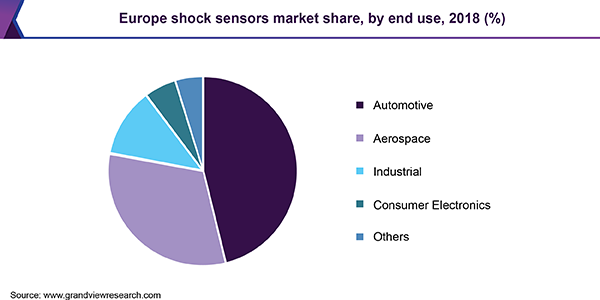 Furthermore, the increasing terrorist activities and other forms of external aggression are encouraging most governments across the world to make higher investments for upgrading their aerospace and defense equipment. Shock sensors are typically used in flight controls as well as actuation systems. They are also used to measure torque and force in braking and actuation systems. Additionally, the demand for the use of these sensors in end-use segments such as automotive, consumers, and industrial is also increasing.

The other segment in the report covers industries such as oil & gas and construction. The usage of these sensors in these sectors is anticipated to increase in the next few years. A surge in the usage of shock or impact sensors in sports helmets is also expected to increase over the forecast period. Shock sensors are being increasingly embedded inside helmets owing to their compact size. They record and transfer technical data to a person’s smartphone, thereby allowing the user to receive timely medical assistance in the case of a concussion or an injury.

The regions covered in the report are North America, Europe, Asia Pacific, Latin America, and MEA. The North American region dominated the market in 2018 owing to the presence of a well-established infrastructure in several industries and the improved after-sales services provided by the sensor manufacturers in the region. The Asia Pacific market is expected to grow at the highest CAGR over the forecast period owing to the steady expansion of the automotive, aerospace and defense, consumer electronics, and industrial manufacturing sectors. Frequent oil & gas explorations in the MEA region is one of the primary reasons driving the demand for these sensors region.

The costs of shock sensors are expected to marginally reduce over the forecast period. The costs have been declining steadily over a while due to various reasons such as competition among manufacturers, advancements in technology, and so on. The demand is anticipated to increase manifold in a wide range of end-use applications, including automotive, industrial, and communication application areas. Thus, the unit shipments of these devices are expected to increase in the North American and Asian Pacific regions over the forecast period.

The key players operating in the market include TE Connectivity; Murata Manufacturing Co., Ltd.; PCB Piezotronics Inc; Honeywell International, Inc.; Dytran Instruments Inc; Mobitron AB; Meggitt SA; Spotsee; IMI Sensors; SignalQuest, LLC; Climax Technology Co., Ltd.; and i1 Biometrics. To cope with the rising competition, the key industry players are emphasizing on investing in research & development activities, entering into partnerships with established players, and establishing production facilities to enter the markets of emerging economies. For instance, IMI Sensors launched the market’s smallest model with high-frequency response and resistance to extreme temperatures in harsh environments. As most major companies have a full-fledged R&D infrastructure in their premises, focus on product innovation forms an integral of growth strategies. The effective distribution of products through a robust network of partners in multiple countries also enables the major companies to strengthen their positions in the global market.

This report forecasts revenue growth at global, regional, and country levels and provides an analysis of the latest industry trends in each of the sub-segments from 2014 to 2025. For this study, Grand View Research has segmented the global shock sensor market report based on type, material, end-use, and region: