The global slow and controlled release pesticides market size was USD 1.7 billion in 2016 and is anticipated to grow at a CAGR of 7.3% from 2017 to 2025. The limited arable land area and rising demand for food by growing population are expected to drive the segment growth in the forecast period.

The slow and controlled release formulation of pesticides consists of retarding biological agents that release their constituents into the surroundings over a defined period. These agents are bound chemically and physically in a polymer mix by using various techniques. The different systems to incorporate this formulation includes migration control by membranes, migration control without membranes, laminate system, monolithic systems.

The United States Environmental Protection Agency has established the pesticide tolerance limit for the crops traded in the country. It has set these norms for each crop using deducing risk assessment analysis. The U.S. Food and Drug Administration (FDA) and the Department of Agriculture (USDA) is responsible for enforcing these norms. The USDA is responsible for enforcing tolerance limits for poultry, egg, and meat products whereas FDA enforces the rules for other foods such as vegetables, fruits, and so on.

The market in the U.S. is likely to be driven by the strong growth in the agriculture sector of the country. Increased emphasis on biotech plants or crops is likely to drive the demand for the product in the predicted timeline. Companies manufacturing slow and controlled release formulation are developing technologies to enhance efficiency and reduce the overall pricing of the product. However, recent mergers of the key players in the industry are leading the market towards consolidation. The segment is likely to experience an oligopoly trade policy where the top five companies will control the pricing in the coming years. The key ten vendors almost constitute nearly 90% of the global agrochemical market.

The fungicides are expected to observe strong demand from the European region. France and Italy constitute the major usage of fungicides in the European region due to the limited arable land area and rising migration in the country. However, the government of France has deduced a plan to cut its pesticide consumption by half by 2025. Still, the segment is expected to grow at a CAGR of 6.7% from 2017 to 2025.

The fungicides are projected to observe steady demand from developing economies such as India, South Africa, Brazil, Argentina, and so on. These developing countries have the agricultural sector as one of the major contributors to their GDP. The emphasis on increasing agricultural yield in these countries is likely to act as a catalyst for the growth of the fungicides segment during the forecast period.

The demand for insecticides is expected to accelerate in the projected timeline due to the rising threat of parasites. The change in the global climate has triggered the growth in numbers of pests. The rising global average temperature has caused frost-sensitive insects to outlast winters and breed again in the summers. This has instigated the growth of moths, insects, beetles, aphids, and other types of bugs. Thus, the rising growth of pests and insects is likely to drive the demand for the pesticide sector and it is expected to grow at a CAGR of 7.5% from 2017 to 2025.

The maximum growth for the insecticides segment is anticipated to be from the Asia-Pacific region. The growth is supported by the technological advances implemented by developing countries of the region such as India, China, and so on. These countries practice agrarian culture due to their large population. The booming population coupled with rising urbanization and increasing purchasing power of the middle-class is likely to drive the demand for agricultural commodities. The growth in the demand for agricultural commodities is likely to act as a key driver for the growth of the insecticides segment in the region.

The slow and controlled release pesticides market by application is segmented into agriculture and other sectors. The agriculture sector is anticipated to dominate the industry with the primary share of 61.8% in 2016 and is expected to increase its share to 62.7% by 2025. Furthermore, the growing population coupled with swiftly rising urbanization is likely to strain the food resources. To counter this challenge, crop yield is likely to be increased with the use of biotech crops and growth enabling chemicals.

The others segment included in the segmentation includes residential, commercial, and household application of slow and controlled release formulation. The segment is expected to decline by 38.2% in 2016 to 37.3% in 2025. Although, it is anticipated to grow at a stable pace, owing to the increasing population of pests in residential, commercial, and household properties. This growth has further accelerated with the change in climatic conditions.

The North America region is likely to dominate the market for slow and controlled released pesticides from 2017 to 2025. High agricultural productivity output is likely to create a constant demand for the slow and controlled release formulation. The North America region is anticipated to be followed by APAC, Europe, CSA, and MEA. However, the strongest growth concerning CAGR is likely to be recorded in the APAC and CSA region respectively. 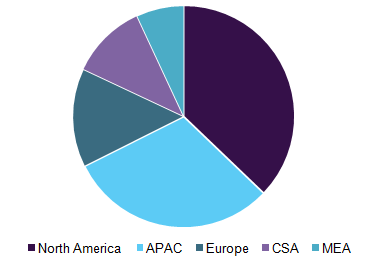 The growth is likely to occur in developing economies such as Mexico, India, South Africa. For instance, Mexico has signed multiple trades and sanitary agreements with the U.S. to provide avocados, berries, tomatoes. Furthermore, Mexico also signed the pact with China to provide tobacco, berries, dairy, and other products. The stable demand is expected to create strain to increase agricultural output. Thus, developing nations are anticipated to play a primary role in the development of this industry.

The sector is observing a rise in strategic mergers among key industry players. For instance, the key mergers of slow and controlled release pesticides industry include the merger of Dow and DuPont, Bayer and Monsanto, and Syngenta and ChemChina.

This report forecasts revenue growth and provides an analysis of the latest trends in each of the sub-segments from 2014 to 2025. For the purpose of this report, Grand View Research has segmented the global slow and controlled release pesticides market on the basis pesticides-type, application, and region: