The global solar panel recycling market size was valued at USD 63.8 million in 2016 and is projected to record a CAGR of 22.1% over the forecast period. The global energy crisis coupled with the environmental degradation caused by the conventional sources of energy such as fossil fuels and nuclear energy is likely to boost the demand for renewable energy over the forecast period. Transitioning trend towards renewable sources of energy owing to its minimal environmental impact is expected to augment the solar panel recycling market growth.

Additionally, the falling prices for solar panels lately are anticipated to spur the rate of solar PV installations. The waste generated at the end of life of the PV modules is subject to recycling to reuse the materials such as silicon, glass, and various metals. The demand for solar panels is witnessing growth as it is evolving as an environmentally friendly and economical source of energy relative to conventional energy sources. Rising popularity and awareness in regions such as North America, Europe, and the Asia Pacific is anticipated to positively impact the solar panel recycling market. 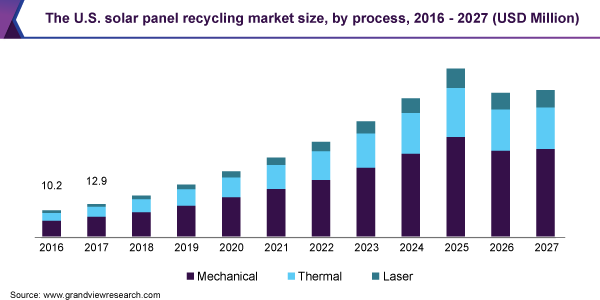 Monocrystalline solar panels, manufactured with single crystalline silicon, currently dominate the market owing to their greater efficiency levels as well as various inherent benefits such as longer shelf life and space efficiency. However, thin-film panels are expected to emerge as the fastest-growing segment over the forecast period owing to its effective performance at a low cost.

The preference towards the mechanical process for the recycling of solar modules owing to the highest efficiency with no environmental threat has increased the demand for the segment. Also, laser technology for recycling, as a result of extensive research and development, is expected to witness a rise considering its efficiency and technologically advanced procedure.

Extensive research and technological advancements have enhanced the performance as well as recycling procedures for solar modules. The early loss scenario has been increasing recently which is further augmenting the need for solar panel recycling. Various government regulations and standards to promote renewable energy projects as well as solar panel recycling to maintain environmental balance are projected to foster market growth throughout the forecast. Major players in the industry are constantly striving toward technological advancements in an attempt to increase efficiency and service quality.

However, the high-end research and development involved in evolving processes that can provide the highest level of efficiency and enhance the life span of the solar modules cost exorbitant. Introduction of the laser process of recycling and organic PV cells that cause minimal environmental damage cost huge and therefore make the process more expensive. Additionally, suitable infrastructure and skill development are also necessary for effective solar panel recycling. Therefore, these factors are expected to pose a challenge to the solar panel recycling market growth. Besides, service providers are required to conform to numerous standards and regulations set by authorities in different regions.

The monocrystalline solar panel segment accounted for 51.4% of the global solar panel recycling market share in 2016. The panels are widely used on account of high efficiency, longer shelf life, and high heat tolerance. These panels have a uniform color and are aesthetically pleasing, although being expensive. It is highly preferred due to the highest level of efficiency provided by these panels and thus expected to account for the majority share.

The thin-film segment was valued at USD 7.6 million in 2016 and is likely to witness considerable demand over the forecast period owing to various distinct characteristics. Rising research and development has led to the evolution of thin-film solar panels with advantageous properties such as flexibility, low cost, lightweight, and temperature resistance. These panels enable mass production in light of their cost-effectiveness and are projected to emerge as the fastest-growing segment over the next eight years. 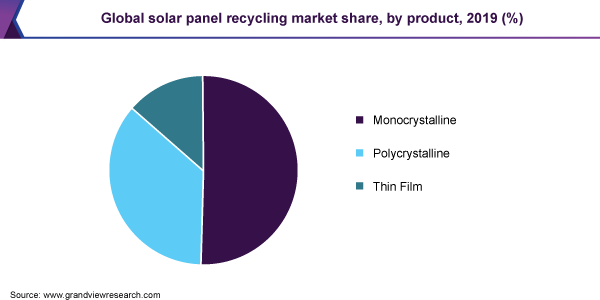 The market in North America was valued at USD 11.2 million in 2016. The U.S being the major market in the region, growth can be attributed to extensive research and development undertaken along with increasing PV installation rates in light of falling prices. However, Asia Pacific is likely to remain the second-largest market from 2017 to 2025.

The growing consumer awareness coupled with various government-funded projects and other incentives to encourage the recycling of PV panels is projected to have a positive impact on the growth of the solar panel recycling market in the Asia Pacific region. The shifting of manufacturing facilities to emerging countries such as China and India and expanding applications is anticipated to augment market demand.

The service providers continue to focus on innovation and technological advancements in the recycling mechanisms to deliver enhanced performance. Such innovations coupled with competitive pricing are likely to assist in increasing market share over the forecast period. Companies are investing heavily in research and development to overcome the barriers faced while recycling solar modules and enhance service quality.

This report forecasts revenue growth at global, regional, and country levels and provides an analysis of the latest trends and opportunities in each of the sub-segments from 2014 to 2025. For this study, Grand View Research has segmented the solar panel recycling market based on process, type, shelf life, and region: