The global squalene market size was valued at USD 121.55 million in 2021 and is expected to expand at a compound annual growth rate (CAGR) of 10.9% from 2022 to 2030. Increasing consumption of natural ingredients in personal care and cosmetics is expected to emerge as the major factor driving the demand. 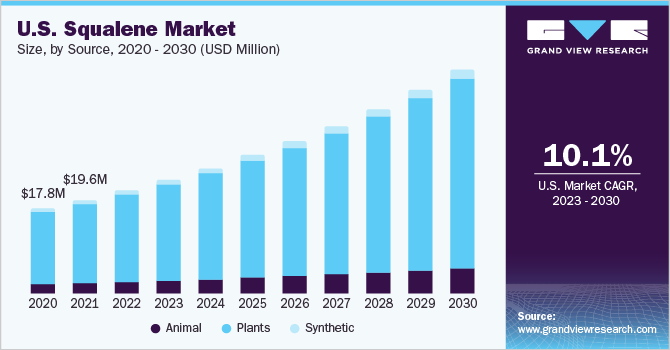 Squalene is translucid, has a low odor, and offers moisturizing properties, thus making it one of the most preferred emollients in the world. Owing to the absence of toxicity, it is thus widely used in personal care applications. Squalene oil is also utilized in the cosmetics industry to fight free radicals that damage the skin and speed up the aging process.

Furthermore, another factor that fuels market expansion is the rising demand for squalene in several vaccines. It is a vital component of vaccinations including the COVID-19 vaccines as it is extremely effective in boosting the immune response.

A report published by the International Trade of Endangered Species states that five shark species are in danger of extinction. This is anticipated to significantly reduce the animal-based squalene and drive plant- and synthetic-based sources.

The U.S. is the largest producer and consumer of squalene in North America. The market is expected to grow significantly over the forecast period owing to the growth of the cosmetics industry in the country. The growth can be attributed to a high penetration rate of global cosmetic brands and an increase in the demand for beauty care products and beauty clinics owing to expanding working women population in the country.

Squalene is majorly extracted from shark liver oil and olive oil. Olive oil is a major source of extraction in the U.S. owing to the restrictions imposed on poaching of marine animals under the Marine Mammal Protection Act Policies (MMPA) that prohibits the take of marine mammals, including hunting, collecting, capturing, harassing, or killing them in the waters and by the citizens of the U.S. on the high seas.

The act also makes it unlawful to import marine mammals and items derived from marine mammals into the country without the necessary permits. This could lead to an increase in the use of plant-based or synthetically manufactured squalene over animal-based in the U.S. in the coming years.

The plants segment dominated the market with a revenue share of over 80.0% in 2021. This is attributed to the declining population of sharks, increasing awareness among people regarding animal welfare and protection, and regulatory frameworks imposed by the government for the protection of marine animals.

As per the International Olive Council (IOC) report, world olive oil production may reach 3,214, 500 tons, 2.9% more than the previous crop year due to the high cultivation of olive trees in this region. Naturally, squalene is majorly found in olives, amaranth, and rice bran. The highest amounts of the product are found in olives depending upon the cultivator, extraction technology, and level of oil refining. Extra virgin unrefined olive oil contains higher concentrations of the product as compared to refined olive oils.

Shark squalene is obtained from the liver oil of freshly preserved livers of numerous species of deeper water sharks as they have higher product content. It requires around 3000 sharks to extract just one ton of squalene, hence excessive catching of these animals led to a dramatic decline in the population of certain species as around 2.7 million deep-sea sharks are poached every year due to the wide application in the cosmetic industry.

In order to protect these sharks and shift the manufacturers to use plant-based squalene sources, several laws were imposed. In India, extraction, possession or trade in 10 elasmobranchs is completely prohibited as they are listed in India's Wildlife (Protection) Act, 1972.

The personal care and cosmetics segment dominated the global market with over 70.0% share in 2021. The growth in this segment can be attributed to the usage of squalene in a variety of cosmetic products meant for skin care and hair care.

Multinational cosmetic companies such as L’Oréal, Unilever, and St. Botanica have already started to shift from shark liver oil-based to plant-based squalene for use in their personal care products and cosmetics owing to its exceptional properties, along with less extinction risk posed by them to sharks. 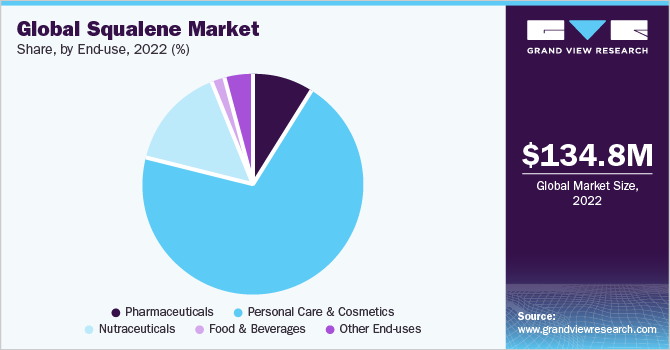 In 2021, L’Oréal acquired U.S.-based Youth to the People, which has branches in Canada, the U.S., Australia, and some European countries. Youth to the People offers skincare products developed from plant extracts. This acquisition has helped L’Oréal use plant-based squalene in its cosmetic products rather than shark-based.

Europe dominated the market in 2021 with a revenue share of over 30.0%, followed by the Asia Pacific region. This is attributed to the large-scale production of olive oil, which is a major plant-based source of squalene, and increased demand for the product from major economies such as Germany, France, the U.K., Italy, and Spain, in the region.

As of 2021, Europe accounted for a significant share of olive oil production. Italy, France, and Spain are a few among the nine producing member countries in the region. Spain accounts for more than half of the total area under olive groves in Europe. Squalene manufacturers in this region are switching to the production of plant-based squalene from shark-based ones. 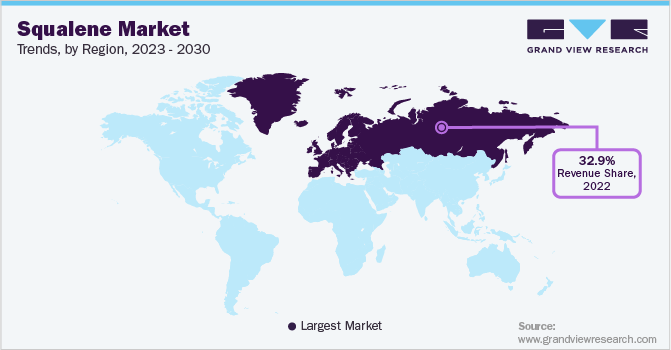 According to the European Federation of Pharmaceutical Industries and Association (EFPIA), the pharmaceutical industry had one of the largest research and development budgets in France in 2021. It accounted for a 9.8% share of overall pharmaceutical revenues in 2021.

Pharmaceutical manufacturers in France are continuously investing in research and development activities for producing innovative and effective medicines developed from bio-based ingredients to ensure environmental safety. This, in turn, is expected to lead to the increased consumption of plant-based squalene in the pharmaceutical industry in the country over the forecast period.

Germany imported approximately 85 tons of olive oil in 2020 owing to increasing demand for olive oil from health-conscious consumers and surging usage of plant-based squalene in various end-use industries such as personal care products and cosmetics, nutraceuticals, and pharmaceuticals. Companies such as L’Oréal in Germany have switched from the usage of animal-derived to plant-derived squalene in their products.

The growth of the market in the Asia Pacific can be attributed to the easy availability of raw materials, cheap labor, low costs of setting up manufacturing units, and the expansion of the end-use industries such as personal care products and cosmetics, pharmaceuticals, nutraceuticals, and food & beverages in the region that utilize squalene.

The market is fragmented and competitive with the presence of several players. Major players are clustered in the European and North American regions, whereas several small players are clustered in Asia Pacific, mainly in India, China, and Japan, as the region offers easy access to shark liver oil and olive oil, which are essential raw materials for the production of the product. Some prominent players in the global squalene market include:

This report forecasts revenue and volume growth at the global, regional, and country levels and provides an analysis of the latest industry trends and opportunities in each of the sub-segments from 2015 to 2030. For the purpose of this study, Grand View Research has segmented the global squalene market report on the basis of source, end-use, and region: 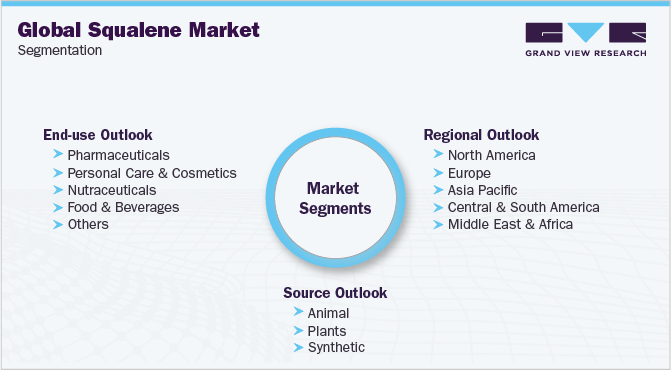 How big is the squalene market?

What is the squalene market growth?

Which segment accounted for the largest squalene market share?

b. Plant segment dominated the market which accounted for a market share of 82.30% in 2021. This is attributed to the declining population of sharks, increasing awareness among people towards animal welfare and protection, and regulatory frameworks imposed by the government for the protection of marine animals.

Who are the key players in the squalene market?

What are the factors driving the squalene market?

b. Increasing consumption of natural ingredients in personal care & cosmetics is expected to emerge as the major factor driving the demand.

Weaker consumer demand for lifestyle and wellbeing products due to social restrictions and lockdown policies shall have a negative impact on the demand patterns of cosmetic ingredients and certain categories of food additives. However, easing restrictions and public discourse about restarting economic activities in the consumer goods marketspace indicates that, the recovery of demand is imminent. The report will account for COVID-19 as a key market contributor.