The global squash rackets market size was valued at USD 185.2 million in 2018 and will expand further at a CAGR of 3.6% from 2019 to 2025. Rising popularity of squash around the globe is expected to be the key factor driving the demand for these rackets. Moreover, a number of tournaments and world championships held by international sports associations including the World Squash Federation (WSF) and Professional Squash Association (PSA) will further increase the popularity of the sport encouraging more participation.

This is also likely to augment the product demand over the coming years. In addition, constant product innovations will have a positive impact on the overall demand. Increased awareness about the importance of racket sports for improved muscular strength and flexibility is expected to drive the market further. 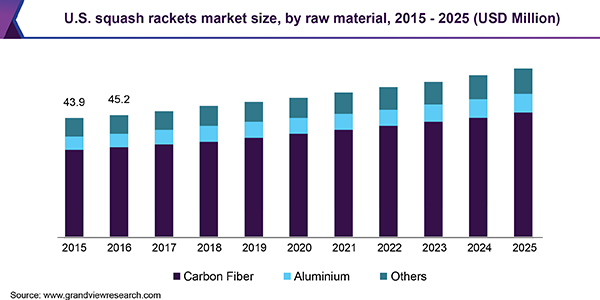 Furthermore, the governments of countries including the U.S., the U.K., Germany, France, Australia, China, India, and Malaysia have been promoting the sport by implementing favorable policies and various initiatives. This is also said to have a positive impact on the market growth over the forecast period. For instance, in October 2017, the Ministry of Sports & Youth affairs, the Government of India, launched the Khelo India Programme.

This was initiated to revive the sports culture and to develop a strong framework for all types of sports and games. Based on region, North America was the largest market in 2018 and accounted for more than 30% of the overall share. The region will retain its dominant position throughout the forecast years.

Carbon fiber was the largest raw material segment in 2018 and accounted for more than 70% of the global market share. It is projected to witness the maximum CAGR over the forecast years. Carbon fiber-based rackets are lightweight and have high strength and durability offering a better combination of swing, balance, and weight. These factors are likely to augment the demand for carbon fibers.Key manufacturers in the market, such as Head N.V., Dunlop Sport, and Tecnifibre, are focusing on expanding their product portfolio, which is also likely to have a positive impact on the material demand. For instance, in April 2015, Prince Global Sports, a U.S.-based manufacturer, introduced new carbon fiber-based models of rackets with ‘TeXtreme’, an advanced, light-weighted, and strong carbon material with high stability, which offers great power to swing coupled with superior precision and control.

Brick & mortar sales channel was the largest segment in 2018. Rising number of exclusive sports stores and multi-brand sports equipment outlets in developing countries including China and India is anticipated to impel the segment growth. For instance, recently, Decathlon S.A., a France-based sporting goods retailer, established one of the biggest stores in Singapore in collaboration with Sport Singapore (SportSG), a national sports agency of Singapore. According to the company, the region is one of the fastest-growing consumer centers for sports. 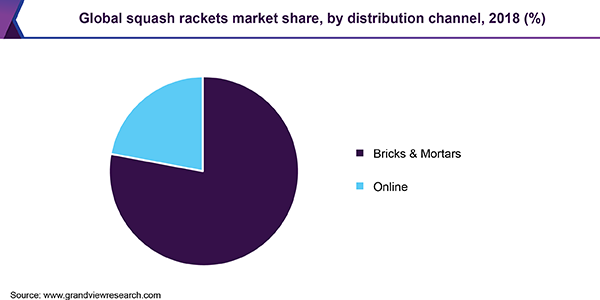 Such strategic moves by key companies will augment the segment growth further. The online distribution channel is expected to be the fastest-growing segment at a CAGR of 4.1% from 2019 to 2025. Increasing number of smartphone and internet users, especially in emerging countries such as India and China, is the major growth-driving factor for the segment. In addition, the impact of ecommerce and social media platforms also plays a key role in boosting the segment growth.

North America was the largest regional market in 2018 and will expand further at a steady CAGR from 2019 to 2025. Various squash tournaments hosted in the region is expected to be among the key factors responsible for market growth. For instance, U.S. is going to host WSF Men’s World Team Championship from 15 December to 21 December 2019. In addition, from 05 October to 12 October 2019, the country will be hosting U.S. Open.

Europe is expected to foresee the fastest CAGR of 4.0% from 2019 to 2025 due to high popularity of the sport as a recreational activity. In addition, new product launches with high power features by key manufacturers in Europe are expected to fuel the regional market growth.

The global squash rackets market is consolidated in nature. Some of the prominent companies include Head N.V., Dunlop Sport, Tecnifibre, Wilson Sporting Goods, Babolat, Prince Global Sports, and ONE SPORTS s.r.l. Most of these manufacturers focus on new product development to maintain a competitive edge.

This report forecasts revenue growth at global, regional, and country levels and provides an analysis of the latest industry trends in each of the sub-segments from 2015 to 2025. For the purpose of this study, Grand View Research has segmented the global squash rackets market report on the basis of raw material, distribution channel, and region: