The global surgical dressing market size was estimated at USD 3.4 billion in 2016 which is anticipated to grow at a CAGR of more than 5.6% during the forecast period. The number of organ transplant procedures worldwide was reported to be 126,670 and 17,945 in 2015 and 2000 respectively, according to the Global Observatory on Donations and Transplantation (GODT) database. This increase in the number of surgeries may be attributed to widespread awareness, supportive government policies, and advancement in technology with respect to surgeries. 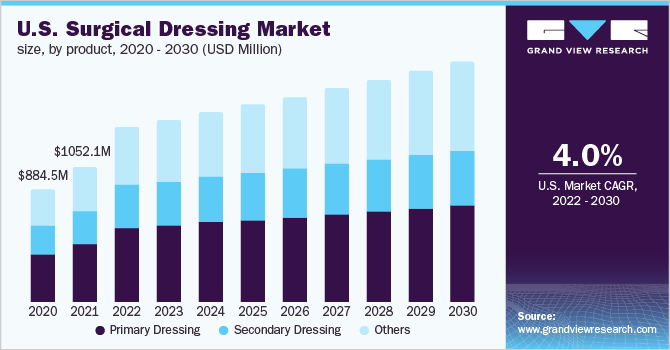 Developed countries such as the U.S., the UK have well equipped Ambulatory Surgery Centers (ASC), where surgical procedures are conducted at a more economical rate and the patients may not have to stay overnight. The range and number of ASC are increasing in developed and developing countries, which is adding to the number of surgical procedures conducted worldwide, thus, a spike in the demand for these products is expected during the forecast period. Additionally, due to supportive insurance policies for surgical procedures conducted in ASC are covered and hence it may act as a driver for the industry.

Lifestyle disorders include diseases such as cardiovascular diseases, diabetes, chronic obstructive pulmonary disease obesity, metabolic syndrome, and some types of cancer. One of the major contributors to the market is cardiovascular disease-related surgeries, which in turn may increase the number of surgical procedures, which further may increase the demand for these products. Additionally, the number of bariatric surgical procedures conducted due to the increasing disease prevalence of diabetes and obesity is also estimated to grow, which may act as a driver for this industry.

The surgical dressing market is segmented into three types on the basis of products. This segmentation includes primary, secondary, and other dressings. The others segment mainly includes alternative therapies for wound healing such as NPWT. The primary segment holds the largest share for the year 2016 with a share of more than 45.0%.

Film dressings are made from polyurethane sheets, which make them thin, flexible, and transparent. These products act as adhesives. It also provides a moist healing atmosphere to promote wound healing. This type of dressing is not used on exuding wounds, as the adhesive inhibits the film from sticking to the exuding part of the wound. Which protects the wound from mechanical trauma and bacterial infection.

Composite dressings which are the part of primary dressings are the multiple layered, waterproof products. This product normally has three layers, the bottom layer which is made up of semi or non-adherent material which allows water to permeate to the next layer but prevents it from sticking to the granulating tissue.

The others segment which includes NPWT is anticipated to gain substantial share during the forecast period as it is estimated to be growing with a CAGR of around 7.0%. NPWT is expected to gain a market share due to the advantages of the device such as rapid wound healing, increased patient compliance, and decreasing chances of infection in the patient.

CVD based surgeries are expected to increase due to its increasing disease burden. It has been estimated by the WHO that over 3/4th of the deaths due to CVD occur in developing countries. Thus, countries such as China, Japan are expected to be a potential region for this industry.

Additionally, diabetes-related complications are rising so the number of surgeries associated with them. Dressings such as alginates, hydrogels, antimicrobial agents, adhesive tapes, absorbents may be used in these surgeries. Therefore, the anticipated growth of the market can be attributed to an increase in diabetes based surgeries.

Pressure ulcers are also anticipated to grow at a lucrative rate. There are various types of ulcers that may require surgical procedures for the treatment or management of the disease. These ulcers include pressure ulcers, peptic ulcers, and venous leg ulcers.

The hospital segment held the largest market share in 2016 with a share of more than 50.0% for this segment. Hospitals require these products in large quantities as they are required for all surgeries and for all the secondary treatments as well. Hospitals generally issue an open tender offer for the procurement of these products.

The ASC segment is estimated to be the fastest-growing segment with a CAGR of around 6.0%

These centers are increasing in number in developed and developing countries and they reduce the pressure on hospitals and physician clinics. There are approximately 5,229 ASCs that are certified by Medicare. 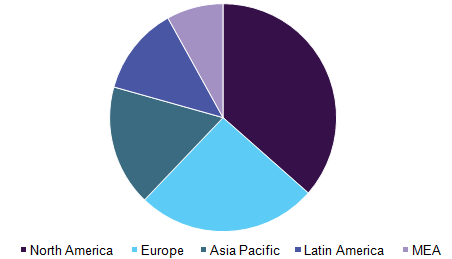 North America dominated the global market for this vertical in 2016. This may be attributed to increasing lifestyle disorders, increasing awareness about organ transplantation, and a rise in the range and number of ASC.

For instance, In September 2015, Advancis Medical announced a strategic agreement with DUKAL Corp. for the distribution and sale of their products. This strategic alliance is expected to expand the company’s product reach in the U.S. and Canada.

This report forecasts revenue growth at global, regional & country levels and provides an analysis of the latest trends and opportunities in each of the sub-segments from 2014 to 2025. For the purpose of this study, Grand View Research has segmented the global surgical dressing market on the basis of product, application, end-use, and region: