The global surgical snares market size valued at USD 1.4 billion in 2018 and is expected to grow at a compound annual growth rate (CAGR) of 4.8% from 2019 to 2026. The market is primarily driven by an increase in factors such as the number of endoscopic ambulatory surgical centers, polypectomy procedures, and preference for minimally invasive surgeries. A significant increase in the number of gastrointestinal procedures in the U.S. and other developed economies is anticipated to support growth over the forecast period. 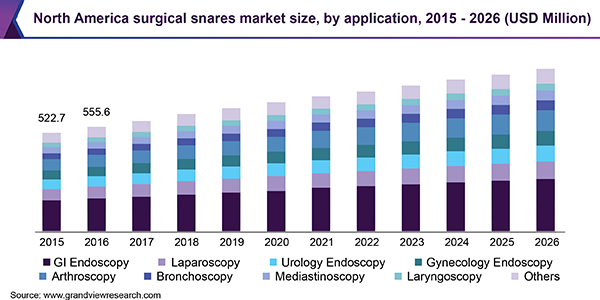 The surgical snare is a medical instrument primarily used for the removal of unwanted growth within a body cavity, including tumors, tonsils, or polyps. A snare consists of a loop-like structure of wire at the tip of a cannula (thin tube), a handle, and a wire tightening mechanism to efficiently remove a tumor. The easy-to-use mechanism of a snare helps surgeons efficiently remove damaged or cancerous tissues. Snares can also help surgeons remove a biopsy sample to determine if the tissue is cancerous. The ease of use and growing demand are propelling the overall growth of the market.

Increased patient awareness of colorectal cancer is also propelling the market. According to 2019 estimates by the American Cancer Society, every year, around 100,000 U.S. citizens are diagnosed with colon cancer and about 44,000 are diagnosed with rectal cancer. Also, approximately 51,000 deaths are expected due to colorectal cancer in 2019. Furthermore, updated guidelines by the American Cancer Society recommend regular screening through six different tests, including a colonoscopy every ten years for adults at or above the age of 45. Therefore, an increase in the number of screening procedures is fueling growth.

According to the 2017 Plastic Surgery Report released by the American Society of Plastic Surgeons, over 17 Million minimally invasive procedures were performed in 2017, a 2% rise from 2016. Procedures such as breast & eyelid surgeries, liposuction, & nose reshaping, as well as other reconstructive surgeries have been witnessing rising demand over the past few years. Thus, the growing demand for surgical procedures in developed and developing economies is expected to indirectly aid the adoption of snares over the forecast period. The aforementioned factors coupled with technological advancements in surgical instruments is expected to drive the global market.

By application, the surgical snare market has been segmented into GI endoscopy, laparoscopy, urology endoscopy, gynecology, arthroscopy, bronchoscopy, mediastinoscopy, laryngoscopy, and others. In 2018, GI endoscopy accounted for the largest market size and is expected to grow at a CAGR of 5.1% over the forecast period. The dominance of the GI endoscopy segment is attributed to a large global geriatric population, high incidence of colorectal cancer, and a consequently large number of polypectomy procedures. The demand for GI endoscopy has increased significantly due to growth in preference for minimally invasive surgeries. Endoscopic procedures are generally considered as low-risk procedures and are also covered by health insurance in several regions.

Arthroscopy is the fastest-growing segment at a CAGR of 5.2% over the forecast period. This can be attributed to a global increase in the prevalence of orthopedic diseases and several orthopedic surgeries. According to WHO, the world’s population aged 60 years and above will double from 11% in 2015 to 22% in 2050. The aging demographic is a core end-user of knee/hip implants and various orthopedic surgeries. Therefore, a growing geriatric population, prone to orthopedic diseases, is propelling growth.

By end-use, the market is segmented into hospitals and ambulatory surgical centers. The hospital segment dominated in 2018 and is expected to maintain its lead over the forecast period. Its leading market share is attributed to the availability of skilled healthcare professionals, increased government funding, and increasing private sector investment into healthcare. 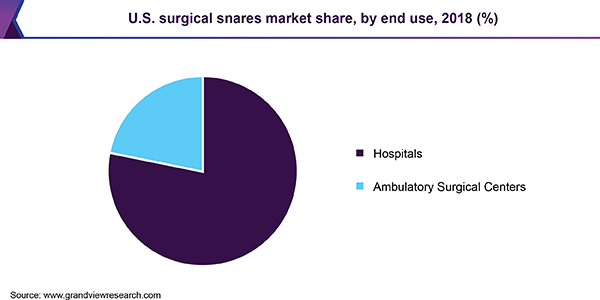 North America dominated in 2018 and is expected to maintain its position over the forecast period. Major factors contributing to its growth include favorable reimbursement policies, local presence of key players, and government initiatives that enable access to colorectal cancer screening programs. The stigma attached to the procedure has also reduced over time and many people have been made aware of the fact that colonoscopy checks every five to ten years could increase their chances of early detection of life-threatening cancer, thereby increasing survival rates.

Europe is growing at a rapid pace and is currently the second-largest region after North America. Its growth can be attributed to favorable reimbursement policies, growing geriatric population, and increasing incidence of diseases that require endoscopy procedures.

Asia Pacific is the fastest-growing segment, at a CAGR of 5.6% over the forecast period, owing to an increase in the geriatric population and a rise in the number of endoscopic surgical procedures, and increasing incidence of colorectal cancer & associated mortality. Its growth is also attributed to increased investments in key countries, such as Japan, China, India, Australia, and South Korea.

Olympus Corporation, a market leader in surgical snares, offers a wide range of products through its medical business segment. It has a global presence and holds major shares in North America, Europe, and the Asia Pacific. Most key players in this market are focused on product launches and mergers & acquisitions to enter or maintain their position. For instance, in 2018, Cook Medical launched two new products: Cook Needle’s Eye Snare and Cook Lead Extraction System. In 2017, Merit Medical System acquired assets from Catheter Connections, Inc. and Argon Medical Devices. These acquisitions enhanced Merit’s product offering and geographic presence. Some of the prominent players in the surgical snares market include:

This report forecasts revenue growth at global, regional, & country levels and provides an analysis of the latest industry trends in each of the sub-segments from 2015 to 2026. For this study, Grand View Research has segmented the surgical snares market report based on device usability, application, and end-use:

How big is the surgical snares market?

What is the surgical snares market growth?

Which segment accounted for the largest surgical snares market share?

b. North America dominated the surgical snares market with a share of 45.3% in 2019. This is attributable to favorable reimbursement policies, local presence of key players, and government initiatives that enable access to colorectal cancer screening programs.

Who are the key players in surgical snares market?

What are the factors driving the surgical snares market?