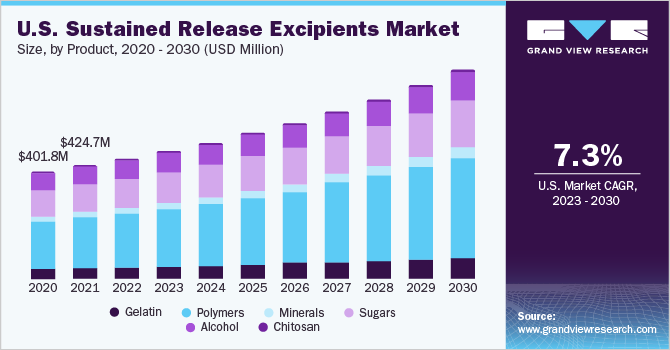 This unveiled a decline in the overall movement including the development of new products during the lockdown due to the shutdown of R&D and manufacturing facilities, scarcity in the raw materials supply, and absence of potential workforce, leading to forced remote working. Mostly, the pandemic has challenged the supply chain logistics, thus increasing the manufacturing costs of various excipients including the sustained-release excipients. Moreover, evaluation of the potential of controlled release excipients for the manufacturing of the COVID-19 vaccine is continued. For instance, single-injection vaccines can be developed using modified-release systems, which permit a pulsatile or sustained release of an antigen.

However, for COVID-19, no commercialized single injection vaccine has been developed yet, despite considerable efforts made. Furthermore, an assessment of Polyvinylpyrrolidone (PVP) as an excipient from conventional to controlled delivery systems with a spotlight on COVID-19 inhibition has been carried out. For instance, the University of Kentucky Lexington is conducting an ongoing trial Povidone-Iodine for the use of nasal spray and gargle. In addition, PVP-I has proven its potential as preventive and prophylactic aid against COVID-19 during the pandemic. Oral drug delivery is a widely used route of drug administration, which has been studied for systematic delivery via several pharmaceutical products in different dosage forms.

Conventional formulations are required to be supplied often in numerous dosage regimens in long-term therapy for the treatment of chronic illnesses, and thereby have several negative effects. Owing to this, sustained-release solid unit dosage forms, such as tablets, are required to alleviate the disadvantages of multiple dosing. These factors have impacted the industry positively. Rapidly fueling the market of sustained-release oral drug delivery includes enabling technology and trends in patient preferences and increasing the comfort of physicians with the capability of persistent drug release to deliver proper blood levels.

There have been various ongoing efforts to improve oral drug therapeutic efficiency and bioavailability and patient compliance. Several, sustained-release oral drug delivery technologies have been developed to meet the growing needs. For instance, in September 2021, an article published in NCBI stated the potential application of gastro retentive drug delivery technologies that could retain the dosage forms in the upper gastrointestinal tract. Therefore, these technologies with sustained-release approaches could enhance and improve patient compliance and therapeutic efficacy by reducing dosing frequency.

A growing number of signed and licensing partnership deals for the development of controlled release drug forms in therapeutic areas, such as Oral Vaccines, Oncology, and CNS, are driving the industry. For instance, in March 2022, Hovione expanded its oral drug delivery toolkit with Zerion Pharma, which aims to commercialize the technology for overcoming the challenges of low drug solubility. Furthermore, the pediatric population requires different oral drug delivery systems in comparison to other subsets of the population, as no delivery systems are specifically designed for them.

As a result, pediatric patients are treated by manipulating the existing adult dosage forms. Hence, while a major chunk of pharmaceutical products is manufactured for adults by pharmaceutical giants, pediatric dosage forms are limited. Sustained release drug delivery forms also aid in the treatment of various diseases contracted by the elderly population. In the case of geriatric patients, sustained release dosage forms are easy to use and comfortable. Adherence to these drugs can also be easily monitored through the usage of these drug delivery systems.

On the basis of products, the global industry has been further categorized into gelatin, polymers, minerals, sugars, alcohol, and chitosan. The polymers product segment dominated the global industry and accounted for the largest share of more than 43.60% of the overall revenue in 2021. The segment will expand further at the fastest growth rate maintaining its dominant position in the global market throughout the forecast period. There has been a substantial increase in the use of polymers to create sustained-release formulations. Polymers have ideal properties to be used as an excipient in solid pharmaceutical formulations.

They have higher strength and improved shelf-life as compared to the other types of excipients used in various pharmaceutical preparations. Pharmaceutical polymers have evolved over the past few years, from being used in the preparation of simple gelatin shells to strengthening capsules of excipients, which have ideal formulation features, that facilitate controlled/sustained release and help deliver drugs to target sites. Moreover, with a rise in the number of formulations making use of polyethylene glycol, the excipient has been witnessing tremendous growth in the past few years. Thus, the growing use of polymers is estimated to boost segment growth.

The oral drug delivery segment dominated the industry in 2021 and accounted for the maximum share of more than 40.25% of the overall revenue. It is the most convenient and preferred route of drug delivery. One of the key factors responsible for the high share is the availability of maximum active surface area for drug absorption in comparison to other routes of drug delivery. The ease of manufacturing tablets and capsules is another major factor contributing to the conventional use of the oral route of drug administration. Oral drugs have been traditionally used for the treatment and management of various diseases. A wide number of active pharmaceutical ingredients are formulated into drugs using excipients that support the sustained release of the drug. It is relatively easy to gain FDA approval if a manufacturer is developing an already identified molecule into a sustained-release formulation.

Oral sustained release formulations are developed with the help of various excipients, such as polymers, alcohols, sugars, & others, using different technologies, such as coacervation, microencapsulation, and the Wurster technique. The transdermal route of delivery is anticipated to gain the highest CAGR during the forecast period. This route of delivery minimizes various limitations associated with the oral and parenteral route of administration. The sustained release of drugs is easily facilitated with the use of transdermal patches through the skin surface. Since this method avoids difficulties associated with the gastrointestinal tract caused by drug interactions with food and enzymatic degradation, it is often preferred over the oral route of drug delivery.

On the basis of technology, the targeted delivery segment dominated the global industry in 2021 and accounted for the largest share of 22.65% of the total revenue. Targeted delivery involves the delivery of the drug to a preferred site of action and prevents the drug from reaching the unintended regions of the body, which everts the chances of drug toxicity. Sustained release drug delivery systems provide higher patient compliance and targeted drug delivery technology allows localization of the drug, which results in a uniform effect of the drug, reduced fluctuation in circulating drug levels, and low risk of adverse effects. The transdermal route of technology is anticipated to register the highest CAGR during the forecast period. 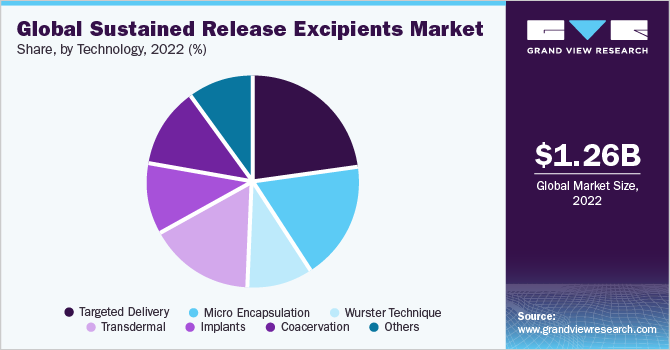 Transdermal sustained release delivery systems offer various advantages over traditional drug delivery techniques as they help avoid hepatic first-pass metabolism, significantly decrease adverse effects of drugs, and drastically improve patient compliance. These technologies are used for the treatment and management of chronic diseases, such as rheumatoid arthritis and asthma, and have proven to be more efficient in comparison to conventional drug delivery systems. Corplex technology by Corium International, Inc. delivers small-molecule drugs through the skin, providing a simplified way to deliver drugs. Thus, with the increasing adoption of sustained release drug delivery systems, the segment is expected to gain significant revenue share in the near future.

Europe dominated the global industry in 2021 and accounted for the maximum share of more than 36.45% of overall revenue. The region will expand further at a steady CAGR retaining its leading position throughout the forecast years. The growth of the region is credited to increased R&D activities and the presence of major pharmaceutical companies in the region. The region is anticipated to grow further at a lucrative rate over the forecast period due to patent expirations and subsequent entry of generics. In addition, increasing collaborations between healthcare organizations in this region to promote awareness about chronic diseases and available treatment options support the market growth in Europe. 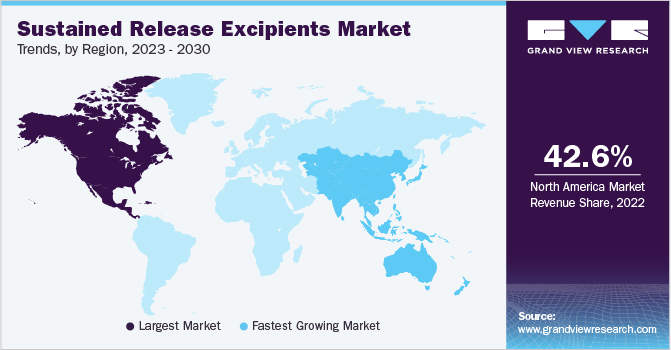 Asia Pacific, on the other hand, is estimated to register the fastest growth rate during the forecast years. The growth of this region can be attributed to the increasing prevalence of various infectious diseases, rapidly developing healthcare infrastructure and the rising demand for highly effective therapeutics. China, in particular, is an emerging market in the Asia Pacific region, and most of the international excipient’s suppliers are proposing to establish production facilities in the country to capture the high market share in terms of revenue generation. These are some of the factors driving the growth of the APAC region.

Key players are implementing various strategies including partnerships through mergers and acquisitions, geographical expansions, and strategic collaborations to strengthen their industry presence. For instance, in April 2019, Colorcon, Inc. announced the expansion of its functional film coatings by adding the Aquacoat range of modified release products through the Controlled Release Alliance with DuPont. In February 2021, DuPont completed the merger of its Nutrition & Biosciences Business with International Flavors & Fragrances. The addition of Aquacoat products into the portfolio improves the variety of solutions offered to meet the industry's needs. Some of the key players in the global sustained release excipients market include:

This report forecasts revenue growth at global, regional, and country levels and provides an analysis of the latest industry trends in each of the sub-segments from 2018 to 2030. For the purpose of this study, Grand View Research has segmented the global sustained release excipients market report on the basis of product, route of administration, technology, and region: 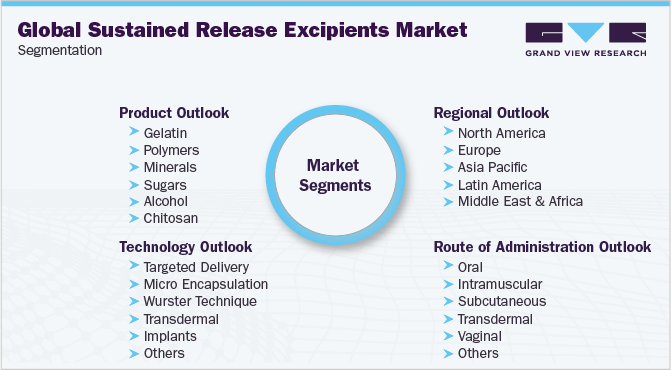 How big is the sustained release excipients market?

b. The global sustained release excipients market size was estimated at USD 1.19 billion in 2021 and is expected to reach USD 1.27 billion in 2022.

What is the sustained release excipients market growth?

Who are the key players in sustained release excipients market?

What are the factors driving the sustained release excipients market?

b. Key factors that are driving the market growth include awareness regarding added benefits provided by sustained-release formulations, coupled with patent expirations and soaring need for pediatric and geriatric dosage forms.