The global sweeteners market size was valued at USD 79.01 billion in 2021 and is expected to expand at a compound annual growth rate (CAGR) of 2.4% from 2022 to 2030. The continuously changing lifestyles and food habits among consumers are boosting the growth of the fast-food and bakery industry, which has led to significant growth of the market for sweeteners in recent years. Sweeteners are used in bakery food products not only for their sweet flavor but also for their ability to bulk, structure, brown, aerate, fuel, and maintain the product’s moisture, shelf life, and appeal.The growth of honey and artificial sweeteners can be credited to rising health consciousness among consumers to encourage healthier and more nutritious food around the globe. In addition to this, the rising inclination toward natural products is propelling the growth of the market. Manufacturers are offering a wide range of sugar substitutes such as xylitol, mannitol, erythritol, stevia, and honey due to the rapidly increasing consumption around the world. 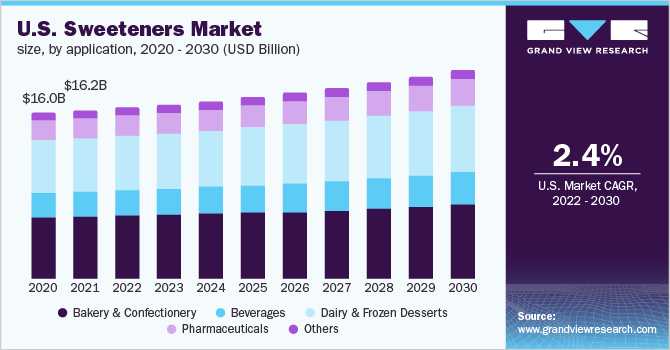 The COVID-19 pandemic had a marginal impact on the market. According to the report by the USDA, there has been a stagnation in sugar consumption in 2020 owing to growing inclination toward alternative sweeteners and natural and plant-based products. Further, according to a report by New Nutrition Business, in 2020, in Europe, two-thirds of the population stated that they were trying to lower their sugar intake. The consumption of white crystals decreased as people became more serious about their health goals.

A fast-paced lifestyle and increased preference for convenience food are expected to be some of the major drivers for the food processing industry. Furthermore, increased consumption of soft drinks, especially carbonated soft drinks, is expected to drive the demand for sweeteners in the U.S. The changing consumer preference is driving the demand for healthier and safer food products that have high nutritional value. Thus, increasing demand for such food products is expected to drive demand for sugar substitutes such as polyol sweeteners, high-intensity sweeteners, and rare sugars over the forecast period.

Major end-use industries of sweeteners include bakery and confectionery, beverages, dairy and frozen dessert products, and pharmaceuticals. Nestle; Tyson Foods, Inc., Unilever; Sapphire Energy; and Lotte are some of the major end-use companies using sweeteners in their products. A wide range of sweeteners is available across the globe including sucrose. Consumers are opting for high-intensity sweeteners including aspartame, sucralose, saccharin, and cyclamates in place of sugar as they do not contribute calories or only contribute a few calories to the diet.

Sucrose dominated the market with a revenue share of over 70.0% in 2021. Sucrose also known as table sugar is a disaccharide produced from glucose and fructose. Sucrose can naturally be found in various fruits, vegetables, and nuts. However, a large quantity of sucrose is produced commercially from sugarcane and sugar beets worldwide using the refinement process. It also ensures the development of the required structure and offers consistency to baked food products, owing to which it is most widely used in the baking industry. Moreover, sucrose has been used in various medicine formulations to impart a pleasant taste to foul-tasting chemicals. Dosages of different medicines have been formulated using sucrose in the form of gummies, chewable tablets, syrups, and lozenges owing to its sweet taste and binding properties. Thus, increased applications of sucrose in various industries are fueling the growth of the sucrose segment worldwide.

Tagatose is expected to expand at a lucrative CAGR of 12.7% over the forecast period. Tagatose has gained popularity in recent years across the world owing to its health benefits and properties similar to sucrose. The global pharmaceutical industry is increasingly investing in the research and development of tagatose for its potential applications in the treatment of dental decay, obesity, and type II diabetes. Thus, the surging research and development activities and the increasing number of potential pharmaceutical applications of tagatose are expected to fuel the growth of this segment during the forecast period.

Bakery and confectionery held the largest revenue share of over 35.0% in 2021. Sweeteners are predominantly used as a sweetening agent in bakery and confectionery food products. In addition, they are among the essential components used in baked food products. Sweeteners are used in large quantities in yeast-based and chemically leavened baked goods such as cakes and cookies. Apart from that, they are also used as bulking agents, coloring agents, humectants, texturizers, and shelf-life extenders.

Sweeteners including high-intensity sweeteners and sugar alcohols such as xylitol and mannitol are largely used to reduce brain swelling and acute kidney failure. They act as osmotic diuretics and help remove excess water from the body. Furthermore, they are being used in sugar-free medicinal syrups, tablets, and capsules on account of their binding, sweetening, taste masking, and coating properties.

The solid form held the largest share of over 70.0% in 2021. The solid form is largely concentrated in the global market as most of the sweeteners are available in solid, crystalline, or powdered forms owing to the feasibility and different functional benefits including ease of transportation, packaging, stability, and wide applications offered by solid sweeteners. Further, solid-state sweeteners are widely used in the food & beverage industry as a coating and bulking agent in confectionery, bakery, and other food and beverage applications. Solid sweeteners are easy to use owing to their physical properties, which is expected to boost their demand over liquid sweeteners. 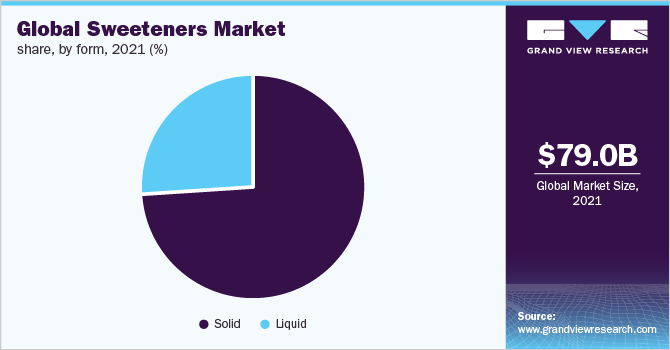 Asia Pacific dominated the market with a share of over 30.0% in 2021. The region holds large growth potential for the food and beverages industry on account of the presence of some of the fastest-growing economies such as China and India. The younger population in the region is largely influenced by western diets. The demand for premium beverages and confectionery products is expected to lead to an increase in the imports of such sweeteners.

Asian economies such as China and India are among the largest producers and consumers of sweeteners such as sucrose. High availability of raw materials required for the production of sucrose such as sugar cane, coupled with favorable government initiatives to increase the production of sucrose in these countries, is expected to boost the growth of the segment over the forecast period. 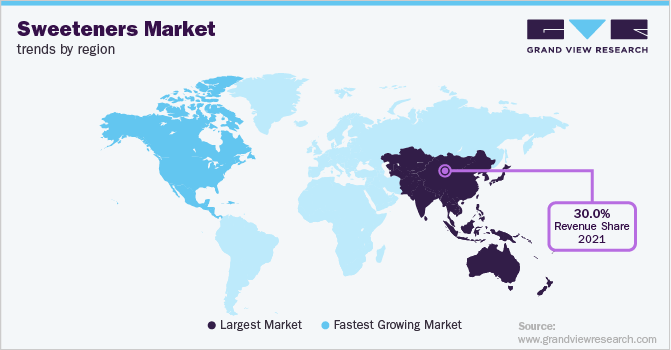 North America is estimated to expand at a CAGR of 2.4% from 2022 to 2030. Several regional players are offering low-calorie food & beverages due to the growing health-consciousness among consumers. Moreover, the growing awareness about sugar alternatives that provide low or no calories is contributing to the growth of the market in North America. Consumers in the region are shifting toward natural and organic products and consuming less packaged and heavily processed food, which is expected to drive the demand for natural sweeteners in the region.

In the American food additives industry, the preference for sugar has been witnessing a drastic shift as consumers are becoming aware of the harmful effects of excessive consumption of sugar i.e. sucrose on human health. Consumers are shifting toward natural and organic products and consuming less packaged and heavily processed food. This is expected to drive the demand for natural sweeteners in North America over the forecast period.

The global sweetener manufacturers have been witnessing robust year-on-year growth for the past few years owing to the rising preference for low-sugar food products, coupled with an extensive application range of sweeteners. The market is highly fragmented owing to the presence of a large number of players. Key companies in the market offer solutions for the food & beverage, pharmaceutical, and personal care industry players.

Key companies are focusing on introducing plant-based natural sweeteners to focus on customer demands. For instance, in June 2020, Heartland Food Products Group, a parent brand of Splenda Stevia sweeteners, collaborated with local farmers in order to grow Splenda stevia plants in the U.S. In August 2020, Sweegen entered into a strategic partnership with the China Commercial Foreign Trade Group (CCFT) for the distribution of Bestevia non-GMO, zero-calorie stevia sweeteners through its vast distribution channels in China. Some prominent players in the global sweeteners market include:

This report forecasts revenue and volume growth at the global, regional, and country levels and provides an analysis of the latest industry trends and opportunities in each of the sub-segments from 2017 to 2030. For the purpose of this study, Grand View Research has segmented the global sweeteners market report on the basis of type, form, application, and region: 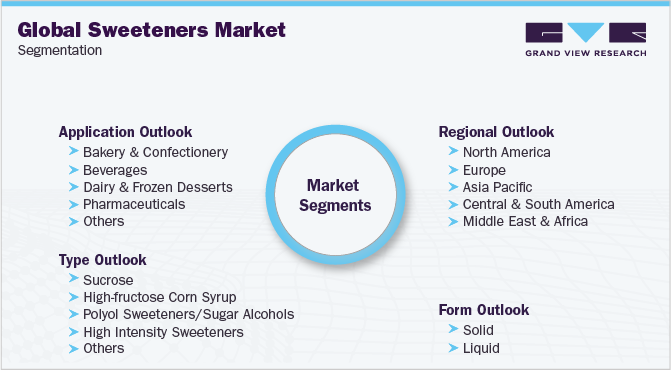 What are the factors driving the sweeteners market?

b. Key factors that are driving the market growth include the rising adoption of natural sweeteners in confectionery, dairy, and bakery products, and the rising health consciousness among consumers to encourage healthier and more nutritious food across the world.

How big is the sweeteners market?

What is the sweeteners market growth?

Which region accounted for the largest sweeteners market share?

b. Asia Pacific dominated the sweeteners market with a share of 33.5% in 2021. This is attributable to the increasing demand for premium beverages and confectionery products as younger population in the region is largely influenced by western diets, which has led to increased consumption of sweeteners.

Who are the key players in the sweeteners market?