The global sorbitol market size was valued at USD 1.47 billion in 2020 and is expected to expand at a compound annual growth rate (CAGR) of 6.5% from 2021 to 2028. The market is expected to witness significant growth over the forecast period owing to the rising usage of diabetic and dietetic food and beverages. The growing product demand as a substitute for sugar in consumer food products is also expected to drive demand for the product over the next few years. Sorbitol is also increasingly being used in oral care products as it is metabolized at a slower rate as compared to other sugar alcohols, preventing dental problems such as cavity and tooth decay. The benefits of the same are expected to propel industry growth over the forecast period. Additionally, the trend of shifting production capacities to Asia Pacific due to low production and labor costs has resulted in low costs for sorbitol, therefore causing rising demand from non-food applications. 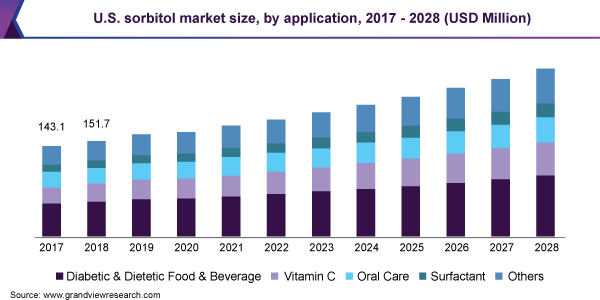 The major driver for the market is the growing demand from the food and beverage industry for nutritive sweeteners. Approval from safety regulatory and human health bodies such as the FDA and the U.S. Department of Agriculture (USDA) for the use of the product in medicines and bakery foods is expected to further drive the market in the U.S. Sorbitol also finds application as a humectant in pharmaceutical products, thereby fueling the growth of the product in the country due to the presence of one of the biggest pharmaceutical industries.

The increasing use of the product in chocolates and confectionary products owing to its textural, moisture-stabilizing, and non-carcinogenic properties is expected to positively affect the overall demand of the market. Sorbitol is chemically relatively inert and is a stable chemical, which is expected to result in high demand for the product as it is easy to incorporate in other food products without hampering the recipe. Due to the unique and useful texture-enhancing properties of sorbitol, it has varied applications, including the manufacturing of cosmetics.

Sorbitol is an intermediate product whose demand largely depends on the demand for end products in its application industries. Ample availability of starch sources, such as potato and corn, in India, China, and Brazil is expected to work favorably for its production over the forecast period. In addition, the number of raw material suppliers is expected to increase in China and India due to the growth of the agricultural sector, aided by the low labor costs and growing demand across the world.

Moreover, sorbitol is used in the production of biofuels. Biofuels are naturally derived fuels that are promoted by various organizations such as the European Commission or EPA through the implementation of favorable policies. The growing popularity of biofuels, coupled with the support of government organizations, is expected to result in an increased number of manufacturers over the coming years. The growing research and applications for the same, especially in developed regions like North America and Europe, are expected to drive the demand for sorbitol over the forecast period.

In terms of revenue, liquid led the market and accounted for more than 77.0% share in 2020. Liquid sorbitol is majorly used as a substitute for sugar in the pharmaceutical and food and beverage industries. The growing demand for low-calorie food caused by the growing number of health-conscious consumers as well as patients with obesity across the globe is expected to fuel the use of the product in these industries.

Crystal-based product is also used as a humectant in various cosmetic products, such as moisturizers and face cream, owing to its capacity to resist bacteriological degradation and retain moisture. Other applications of crystal sorbitol include its use as a plasticizer in the production of capsule outer shell and as a filler and excipient in the production of pharmaceutical tablets. Thus, the growing demand for cosmetic products is anticipated to prove beneficial for sorbitol demand over the coming years.

Diabetic and dietetic food and beverage led the market and accounted for more than 35.0% share of the global revenue in 2020. The increasing global consumption of functional foods as well as economies of scale has resulted in low manufacturing costs for the major manufacturers while creating new opportunities for the growth of sorbitol in the future. However, a gradual increase in the demand for sweeteners, such as maltitol and xylitol, is expected to pose a threat to the market as they can be substituted with sorbitol.

Sorbitol finds application in surfactants as detergents, dispersants, emulsifiers, and wetting and foaming agents. Biobased surfactants are witnessing increased utilization in the food processing industry. The surfactant acts as a stabilizing agent for a variety of food products, such as bread, ice cream, and cakes. Additionally, the surfactants help in maintaining the viscosity and the texture of the food products and extending shelf life. As a result, the growth of the food processing industry is expected to drive the demand for biobased surfactant products over the forecast period.

The vitamin C application segment is expected to expand at the highest growth rate over the forecast period. Vitamin C is mainly synthesized using two manufacturing processes, namely the Reichstein Grussner process and the two-step fermentation process. Both the production processes use sorbitol as a primary starting material for the production of ascorbic acid (Vitamin C). The two-step fermentation process is primarily used by Chinese manufacturers owing to its lower cost.

The food segment led the market and accounted for more than 35.0% share of the global revenue in 2020. Sorbitol is generally added to food items to induce sweetness and replace the need for refined sugar. In addition to providing sweetness, sorbitol also acts as an excellent texturizing and anti-crystallization agent in the production of ice cream and bakery products. It is widely used to increase shelf life and maintain the freshness and color of various confectionery and bakery products. Furthermore, it finds application in the production of canned fruit. The food segment is expected to dominate the market over the forecast period, tracing the growth of the food and beverages industry, as applications for the product are expanding in the industry.

Rising awareness regarding dietary supplements owing to their nutritional benefits is expected to have a positive impact on the market growth in the near future. In addition, rising concern over low calorie and sugar-free products on account of the increasing prevalence of diabetes in the world is expected to be a favorable factor for the growth of the market in the near future.

This biobased PG has the same chemical make-up as the petroleum-based PG with a considerably greener manufacturing process. The extensive use of sorbitol in chemical applications is expected to propel the growth of the chemical application segment with a rate of 6.6% over the forecast period.

Asia Pacific dominated the market and accounted for more than 55.0% share of the global revenue in 2020. Increasing health-conscious consumers, coupled with a rise in the number of consumer markets growing at a high pace, is driving the market for sorbitol in the region as it is used widely in various applications, including chocolates, baked goods, and confectionery.

The changing lifestyles of the general public and urbanization in developing countries have further fueled the demand for the product as the end-users are increasingly adopting the product to fulfill the demand of the consumers. Sorbitol is extensively being used for non-food applications in Asia Pacific, for instance, Japan has been a major importer of the product for the oral care industry. 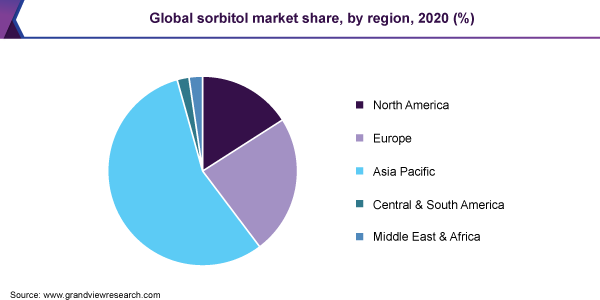 Sorbitol is penetrating the market in the European region at a high pace as the region has a well-established food and beverages industry that keeps continuously evolving and adapting to new ingredients. Meat products constitute an important part of the diet of European consumers. Processed meat products are the most consumed food products in Europe.

The European region is not only one of the largest markets for food and beverages, but also the most regulated market. The market in Europe is expected to exhibit high growth opportunities owing to the role of the product as a substitute for sugar in sugar-based foods and beverages as well as meat products as sorbitol prevents the charring of meat.

Witnessing the growing demand for non-GMO ingredients in the food and beverage, pharmaceutical, and cosmetics industries, manufacturers are increasingly focusing on the production quantity of sorbitol obtained from non-GMO crops. Additionally, manufacturers are focusing on local sourcing key raw materials in order to reduce the transportation costs and environmental footprint of the overall manufacturing process.

PT Ecogreen Oleochemicals, Gujrat Ambuja Exports, and Gulshan Polyols are some of the companies that import sorbitol from their overseas manufacturing plants located in Turkey and India. These companies are focusing on customizing their products to match the specific requirements of the industrial and food processing players. Some prominent players in the global sorbitol market include:

This report forecasts revenue and volume growth at the global, regional, and country levels and provides an analysis of the latest industry trends and opportunities in each of the sub-segments from 2017 to 2028. For the purpose of this study, Grand View Research has segmented the global sorbitol market report on the basis of product, application, end-use, and region:

How big is the sorbitol market?

What is the sorbitol market growth?

Which region accounted for the largest sorbitol market share?

b. Asia Pacific emerged as the dominant region in the sorbitol market with a volume share of 55.71% in the year 2020, owing to the large adoption of sorbitol in a variety of foods and beverages including sports nutritional beverages and functional foods.

Who are the key players in the sorbitol market?

What are the factors driving the sorbitol market?

b. Increasing demand for nutrient-rich foods & beverages in developing as well as emerging consumer markets owing to higher consumer health awareness is expected to drive the growth of the sorbitol market. The increasing demand for sugar-free foods & beverages in developing countries is also expected to aid the market growth over the forecast period.

b. Liquid sorbitol dominated the global market and accounted for more than 77.0% share in 2020. The product is majorly used as a substitute for sugar in the pharmaceutical and food and beverage industries.

Which application segment held the largest share in the sorbitol market?

b. Diabetic and dietetic food and beverage led the sorbitol market and accounted for more than 35.0% share of the global revenue in 2020.

b. The food segment led the global sorbitol market and accounted for more than 35.0% share of the revenue in 2020. Sorbitol is generally added to food items to induce sweetness and replace the need for refined sugar.