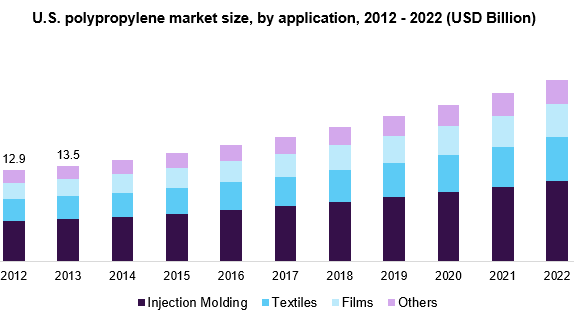 The industry is closely integrated with the global hydrocarbon industry. Propene, a refinery by-product, and one of the most important petrochemical feedstock is the raw material for polypropylene. Thus, volatile oil and natural gas prices negatively impact the global market.

Such volatility affects profitability and operational costs, thus hampering the global polypropylene market growth. Stringent regulations and directives against plastics usage owing to their hazardous impact on the environment during production and disposal are anticipated to retard the global market.

Agencies, such as FDA, REACH and ASTM, have issued several directives concerning polypropylene usage and manufacturing. FDA and REACH have issued regulations governing the polypropylene film applications in food packaging. REACH has issued regulations governing the raw material used and the additives added in the manufacturing process.

Growing demand for light-weight vehicles and better fuel efficiency is slated to drive the global polypropylene market over the forecast period. Previously, steel played an important role in automobiles manufacturing. However, with the growing thermoplastic acceptance in the automobile industry, steel has been replaced by thermoplastic polymers such as polypropylene. Polypropylene products are used in multiple aspects during automobile production.

Massive infrastructure initiatives in the developing regions such as Asia Pacific and Central & South America are projected to positively impact the global polypropylene market. Developing economies such as China, India, Brazil, Mexico, and Argentina are expected to witness substantial growth in the infrastructure sector over the forecast period.

Governments in developing economies have earmarked significant funds for infrastructure development. Steel used to play a critical role previously in construction activities. However, in recent years, thermoplastics such as polypropylene have started to substitute the conventional construction materials owing to several benefits. These benefits include lower weight, easier maintenance, and lower cost of production. Thermoplastic usage in construction has other additional benefits as well such as smoother logistical operations, better flexibility in applications, and easier procurement.

Japan and U.S. dominated the global lightweight automotive materials market, owing to a significant number of vehicle manufacturing and technological advancement of companies operating in the regions. The global lightweight automotive materials market is likely to be driven by a high number of forthcoming car manufacturing facilities in growing markets such as India, China, and Japan. The price of crude oil is projected to have a significant impact on downstream products like polypropylene.

Bio-based PP is majorly used in injection molded automotive parts in order to reduce the overall weight of the vehicle, ultimately resulting in reduced CO2 emissions and increasing fuel efficiency. Governments of developed nations including the U.S. and others present within the European Union have numerous regulations relating to reducing CO2 emissions and increasing fuel efficiency which is expected to provide a much-needed impetus to the bio-based PP market.

Infrastructure projects in developing countries like the Asia Pacific and Central and South America are expected to have a significant impact on the global polypropylene market. Over the forecast period, developing economies such as China, Brazil, Mexico, India, and Argentina are expected to witness infrastructural growth. These advantages include less weight, easier maintenance, and cheaper production costs. Other advantages of using thermoplastics in construction include smoother logistical operations, greater application versatility, and simpler procurement.

Bio-based PP can be manufactured using a variety of raw materials and production processes. However, a breakthrough technology with comparative production costs to that of synthetic PP has not been identified. This is a primary reason for companies not being able to enter into the market resulting in limited commercial bio-based PP production.

The recent development of extraction processes for shale gas has resulted in changing the picture for bioplastics. In addition, large shale gas basins have been discovered across various globally. North America, particularly the U.S., has large shale gas recoverable basins spread across the region. Besides the U.S., recoverable shale gas basins have also been discovered in countries such as Russia, China, Argentina, Libya, Australia, Algeria and South Africa among others. Shale gas cracking results in the derivative of over 90% ethylene. Propylene formed due to shale gas cracking accounts for  only 2% of the overall shale gas volume. The discovery of shale gas has led to an excessive supply of ethylene which has resulted in lowering the cost of the monomer. This in turn has affected the supply of propylene, thus, adding pressure on the existing shortage of propylene.

Asia Pacific dominated the global polypropylene market ahead of Europe and North America with nearly half the market share. Robust demand from the end-use industries in the emerging regions is expected to drive the regional markets.

Asia Pacific dominated the global polypropylene market over the recent years ahead of Europe and North America. Asia Pacific market dominance is slated to continue over the forecast period owing to factors such as strong growth in the end-use industries. Developing markets such as Asia Pacific and Middle East & Africa are projected to experience rapid growth in end uses such as automotive, infrastructure, medical equipment, packaging and textiles. Robust demand from these end-use industries is projected to fuel the regional propylene market. Smaller regional markets such as Central & South America are expected to witness overall market growth. However, these markets are anticipated to have the same market share in the global market. Moderate growth in the developed markets is expected to be offset by the growth in the developing markets.

Government initiatives to develop infrastructure and encourage urbanization are presumed to offer abundant opportunities to the industry participants. Increasing disposable income and the standard of living in these areas is another key factor impacting the regional markets. 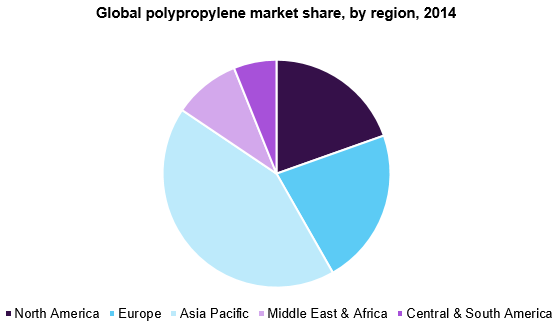 Developed regions such as North America and Europe are anticipated to witness a slightly moderate growth owing to their end-use market saturation. Asia Pacific and Central & South America are projected to witness the highest CAGR of 8.8% and 8.7% respectively over the next seven years. Developing economies such as China, India, Brazil, and Argentina are expected to lead their respective regional market.

Europe and North America are expected to remain the dominant markets for bio-PP during the forecast period owing to the presence of supporting regulations for biopolymers. The market for bio-based PP is expected to increase notably in Asia Pacific and RoW during the forecast period. However, Asia Pacific and RoW are expected to lose out their market shares to Europe and North America over the next six years.

The polypropylene market fragmented and is characterized by numerous producers. The industry is very cost-sensitive, thus urging industry participants to adopt a low-cost strategy. Polypropylene market has low white space and is highly capital intensive in nature. Major manufacturing technologies are licensed out by a handful of major industry participants. Such market dynamics are not favorable for attracting new entrants.

Prominent industry participants are investing heavily in R&D initiatives to improve their product portfolio and increase their production capacity. Mergers & acquisitions are commonplace in this industry with numerous companies forging partnerships and alliances with each other. Such steps are being taken by the companies to prioritize their business goals and cater to the burgeoning demand in the emerging regional market such as Asia Pacific and Central & South America.