The global technical ceramics market size was valued at USD 56.70 billion in 2015 and is expected to witness significant growth of 10.2% over the next eight years. The market growth is owing to rising demand for electronic devices among consumers in Asia Pacific particularly China and India.

Various properties of the technical ceramics such as low thermal expansion, robustness, and high-temperature stability have increased their popularity in different end-uses including electrical & electronics, power, and automotive, which in turn is expected to have a positive impact on the industry over the forecast period.

Technical ceramics are expected to replace traditional materials to a high extent over the next eight years on account of their superior functional characteristics. In addition, these materials exhibit greater corrosion resistance, as opposed to other products such as aluminum and steel and hence, are being widely employed in the medical and automotive sectors. The growth of the automotive and medical industries in emerging economies of Asia Pacific is expected to fuel product demand over the next eight years.

The sector is governed by strict regulations for its use in the automotive, medical, machinery, and electronic & electrical industry. Additionally, various agencies including the U.S. Clean Water Act, monitor mining operations under the CWA Section 402 and 404 on account of their harmful effects on the environment. The Land Protection Branch has implemented the Surface Mining Act in Georgia where the world’s largest kaolin deposits are located. According to the act, only a certain amount of mining activities can be conducted per year. Environmental sustainability is the key aim of these product manufacturers.

Securing an inexpensive fuel supply in a volatile natural gas market is an important criterion for a company’s sustainability and competitiveness in this industry. On account of the unpredictable nature of natural gas prices, smaller companies primarily focus on looking into alternative fuel options or alternative technologies to manufacture these products.

Alumina held the largest share of 39.6% in 2015. Increasing use of alumina in end-use sectors such as machinery, automotive, and electrical & electronics on account of superior weathering and corrosion resistance properties is expected to fuel industry growth over the next eight years.

The titanate ceramics segment was valued at USD 13.29 billion in 2015. Titanates are well known for the production of the high-quality materials, including potassium titanate and sodium titanate, which are used as friction modifiers in brake pads and linings. The titanates market is led by the U.S. due to its high consumption capacity.

Zirconate segment is expected to register a growth rate of 11.4% during the forecast period. Zirconate, often referred as PZT, is one of the main contributors in the production of piezoelectric ceramic materials. It is an intermediate compound with high insoluble properties, especially in water.

In 2015, electronic devices were the largest application segment and was valued at USD 16.82 billion. The product offers superior thermal and chemical properties which have led to its use in numerous applications in the electronics industry such as core materials, circuit carriers, and ceramic substrates.

Bioceramics held a share of 2.3% in 2015 and is expected to register the fastest growth rate over the forecast period. These products are widely employed in the manufacturing of dental as well as medical implants. In addition, they are employed in the replacement of hard tissue such as teeth and bones. They are also used in the production of kidney dialysis machines, pacemakers, and respirators. Large healthcare base in Europe is expected to fuel product demand over the forecast period.

Electrical equipment was the second largest application segment accounting for 29.7% in 2015. Extensive improvement in the shipment qualities of ceramic raw materials like titanate, cordierite, and zirconate ceramics is expected to boost product demand in electrical equipment segment.

The medical segment is anticipated to register a growth rate of 11.6% over the next eight years. Technical ceramics are effectively employed in orthopedics to increase the quality of life with implant components for artificial hip joints and knee replacements. These are also employed in medical devices and equipment such as lithotripters, ultrasonic cleaners, and dental products.

These products can withstand mechanical stresses and high temperatures in applications such as energy generation in turbines and power plant engines. In addition, they are used in systems for solar thermal energy conversion and in photovoltaic, water and wind power plants. The product ensures efficient use of resources in energy supply and distribution from both renewable and conventional sources.

Electrical & electronics was the largest end-use segment in 2015 accounting for a share of 54.7% of the global market. The industry uses very large amounts of ceramics for the production of numerous devices and related products. Technical ceramics are used in the industry mainly because of their electrical conductivity and mechanical properties. They are widely used in circuit breakers and λ sensors.

Ceramic matrix composites (CMR) will be the fastest growing product segment at a CAGR of 13.1% from 2016 to 2024. They are primarily employed in the automotive and machinery industries and space related applications such as heat resistant tiles. These products are also used in the manufacturing of transport equipment for space shuttles on account of their hardness properties and longer life span. Furthermore, these products are employed in the production of sports equipment such as golf clubs. 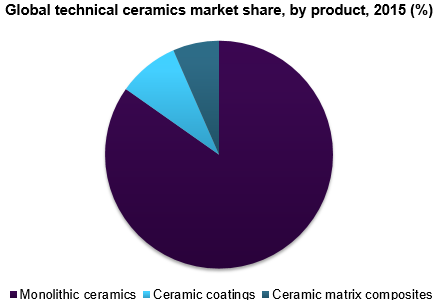 These products are used in a variety of applications like electronics and electrical, power automotive, aerospace, defense, medical, and transportation. In the power generation industry, monolithic products are mainly used in the manufacture of turbine blades and engine components for the machinery units.

Asia Pacific held the largest share of 39.2% in 2015 due to rising consumer spending on electronics, primarily in India and China. Factors such as competitive manufacturing costs, high economic growth, and rapid development of end-use industries will continue to drive the product demand over the next eight years.

North America is relatively mature and is primarily characterized by new product developments and growing preference towards these products. As of 2015, North America held a substantial share of the global market. The U.S. is the largest market witnessing growth in terms of product use in the environmental and medical sectors in the region.

The U.S. market was estimated at USD 13.96 billion in 2015 and is anticipated to grow at a CAGR of 10.1% from 2016 to 2024. Within North America, the U.S is a predominant market witnessing growth in terms of ceramic applications in architectural projects and fine arts. However, this region is expected to lose share to the developing economies over the forecast period.

The industry is fragmented and competitive due to the presence of several key players in the market. These players have a geographical presence with numerous production facilities worldwide. However, the presence of numerous small regional vendors with significant market shares is expected to pose a threat to these international players over the next eight years.

Various product types including zirconia, titania, alumina nitride, and silicon carbide-based materials, have their own characteristics and are employed as an economic and a high-performance substitute for numerous traditional materials such as metals, glass, and plastics. Key players in the market are expected to increase their R&D expenditure to comply with rising demand from new applications. Most companies have been trying to improve product quality at a reduced cost which in turn will propel product need over the forecast period.