The global teleradiology services market size was valued at USD 22.0 billion in 2018 and is anticipated to expand at 2.3% over the forecast period. The adoption of teleradiology services has increased in recent years owing to the shortage of radiologists in several countries, such as the U.S., the U.K., Tanzania, and others. As per a 2018 workforce report by the Royal College of Radiologists (RCR) in the U.K., there was an anticipated shortfall of 1,104 radiologists in 2018. As per the 2017 workforce report by the RCR, the National Health Service (NHS) spent USD 150 Million for outsourcing patient radiology scans due to a shortage of radiologists.

Moreover, factors such as growing need for after working hour’s radiologist coverage, low reporting costs, and short Turn-Around-Time (TAT) have led to an increase in the outsourcing of teleradiology services. Also, the uneven distribution of radiologists in several countries, such as India and Canada has increased the uptake of onshore teleradiology services by hospitals and radiology centers especially situated in rural areas. 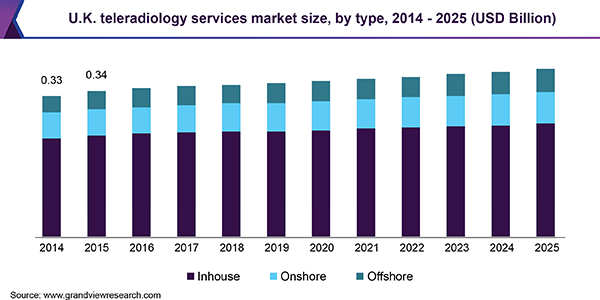 Favorable government initiatives for teleradiology is anticipated to continue fueling the market growth in the forthcoming years. For instance, according to an article published by the Indian Express in September 2019, the government of Maharashtra, India plans to enter into partnerships with private teleradiology providers to curb the shortage of radiologists in rural areas of the state. Saudi Arabia has been working with the state governments for setting up teleradiology services in several parts of the country. In August 2017, Al-Ahsa Health Affairs successfully implemented a project that helped propel the radiology services and overcome the shortage of radiologists.

In recent years, the penetration of Picture Archiving & Communication Systems (PACS) and Radiology Information System (RIS) has increased significantly in developed countries, such as Italy, Germany, and U.K.The huge availability of PACS also indicates the surge in demand for exchanging scanned reports, across departments or other territories, for reading the report remotely. According to Sectra AB, as of mid-2019, more than 400 institutions are connected to the company's image exchange portal in the U.K.

Rising prevalence of chronic diseases such as cancer, liver disorders, and brain injuries, has increased the need for medical imaging. However, insufficient radiologist staff to cater to the increasing patient needs is becoming a major concern for hospitals and imaging centers. Several radiology centers and hospitals are adopting teleradiology services to streamline their radiology workflow to overcome these constraints.

For instance, some African countries such as Tanzania, Uganda, and Zimbabwe have a high prevalence of chronic diseases, thereby witnessing a high need for medical imaging. However, these countries have a smaller number of radiologists to interpret these radiology scans. Thus, these countries generally opt for offshore services for managing their radiology workflow effectively and thereby meeting the medical imaging needs of the patients.

In recent years, teleradiology providers have increased their focus on geographical expansion to boost their presence in the teleradiology services market. For instance, in 2014, USARAD Holdings, Inc. and its consumer division SecondOpinions.com entered into a partnership with General Hospital of Ningxia Medical University. Through this partnership, SecondOpinions.com aimed to provide telemedicine services to the hospital.

In April 2014, Virtual Radiologic (vRAD) entered into a partnership with E-Techco Information Technologies Co., Ltd. (E-Techco). Through this partnership, vRAD became an exclusive agent for E-Techco for professional teleradiology interpretation in mainland China, Hong Kong, Taiwan, and Macau. In June 2014, SecondOpinions.com launched it's telemedicine and teleradiology platform in Russia, to provide teleradiology and telemedicine services to hospitals and imaging centers in the country.

The mammography segment emerged as the largest segment and was valued at USD 5.5 billion in 2018. The growing prevalence of breast cancer, increasing diagnosis rate for breast cancer among women, and the absence of skilled onsite radiologists to interpret mammograms are some of the factors supporting the segment growth. For instance, several emerging and developing economies have a shortage of on-site radiologists for reporting mammograms, in such cases, onshore or offshore services are adopted for interpreting mammography scans.

Ultrasound segment is anticipated to register the fastest CAGR of 3.4% over the assessment period followed by the PET-CT segment with a 3.3% CAGR during the same assessment period. The growing prevalence of chronic diseases, increasing uptake of ultrasound modality for monitoring several diseases such as kidney disorders, liver cancer, and others, and shortage of skilled radiologists to interpret ultrasound scans especially in the emerging region is anticipated to drive the growth.

In 2018, the onshore segment held the largest market share of 49.0%, owing to the uneven distribution of radiologists. Since there is not an adequate number of radiologists located in a remote and rural location to provide onsite supervision. For instance, in Canada, Qikiqtani General Hospital based in Iqaluit, Nunavut connects with the radiologists practicing at the Ottawa Hospital in Ontario to provide teleradiology services. The factors attributed to the growth of onshoring of teleradiology services are the growing adoption of PACS and RIS among the healthcare institutes and increasing uptake of onshore services by hospitals situated in rural and remote parts. For instance, in September 2014, the Global Hawk Imaging and Diagnostics (GHID) Centre, a teleradiology center was opened in Dubai. This center aimed to fulfill 60% of unmet demands for MRI in the UAE.

Inhouse services are widely adopted in some of the European countries, such as the U.K., Italy, Germany, and Spain. Factors, such as the presence of sufficient radiologist workforce coupled with the availability of teleradiology infrastructure in hospitals are anticipated to drive the regional market growth in the forthcoming years. 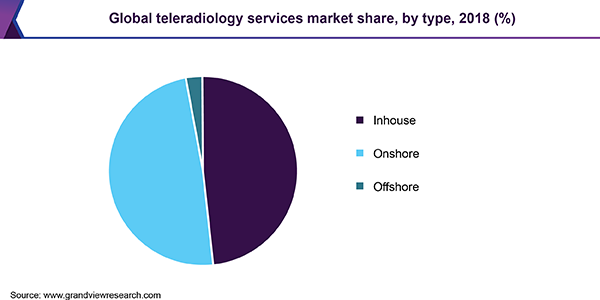 The offshore services segment is anticipated to register the fastest CAGR of 4.7% over the forecast period. Factors, such as shortage of radiologists in various countries, a growing number of foreign-trained and certified radiologists in developing countries such as India and Australia, increasing need for night-time coverage, and rising demand for low reporting costs are propelling the growth.

In 2018, Asia Pacific held the dominant market share of 39.9%. The factors such as the presence of a large number of teleradiology providers especially in countries such as India and Australia, presence of several foreign-trained radiologists, and high adoption of teleradiology services due to even distribution of radiologists are supporting the regional growth. In Japan, a smaller number of radiologists are working with a higher number of imaging devices as compared to other countries. Thus, this gap between medical imaging devices and the distribution of radiologists has led to an increase in the adoption of onshore and offshore teleradiology services. Besides, the adoption of these services is higher in hospitals than in imaging clinics in the country.

The Middle East and Africa are expected to emerge with the fastest CAGR of 3.6% over the forecast period. Growing adoption of teleradiology services by hospitals based in countries, such as UAE, South Africa, Kenya, and Saudi Arabia. Developing healthcare IT infrastructure and government initiatives for teleradiology are some factors boosting the segment growth over the forecast period. For instance, in 2017, St. Francis Community Hospital, based in Nairobi, Kenya adopted teleradiology to curb costs and to reduce waiting time for CT and X-ray scans.

This report forecasts revenue growth at global, regional, and country levels and provides an analysis of the latest industry trends in each of the sub-segments from 2014 to 2025. For this study, Grand View Research, Inc. has segmented the global teleradiology services market report based on type, modality, and region: