Rapid upsurge in the global automobile production on account of increasing demand from emerging economies is likely to propel the product demand during the forecast period. In addition, technological developments in the automotive sector have resulted in a growing requirement for advanced coating technologies, thereby fueling market growth. 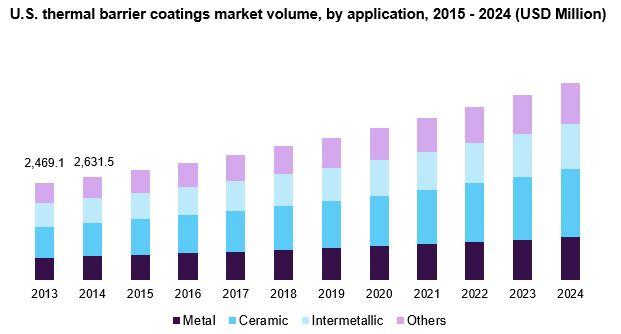 On the other hand, volatile prices of raw materials may hinder industry growth. However, efforts taken by Original Equipment Manufacturers (OEMs) to develop advanced products due to factors, such as industrial and economic growth along with enhanced lifestyles and increased disposable income levels, would drive the market.

Thermal barrier coatings are witnessing high demand from the automotive industry. Thus, these coatings are expected to grow rapidly in emerging regions, primarily driven by the increasing demand from the fast-growing automotive industries in these regions. China is expected to be one of the major contributors to this trend during the forecast period.

Vapor deposition and plasma sprays are some of the key technologies in use. However, these developments are largely observed in developed economies such as the U.S., U.K., and Germany. This phenomenon is expected to continue during the forecast period.

Yttria-Stabilized Zirconia (YSZ) is anticipated to be the dominant product segment over the coming years. It is the most commonly used form of ceramic products. The intermetallic segment is expected to witness a considerable decline during the forecast period owing to high operational costs and resultant shift of preferences toward ceramics, metal, and other innovative product segments.

Ceramics led the product segment accounting for the largest share of 32.5% in 2015 and is projected to witness significant growth over the forecast period. This can be attributed to the superior thermal resistance and multi-layer protection offered by ceramic-based coatings in high-temperature applications. Increasing need for high-quality and heat-resistant materials in the automotive and aerospace segments is expected to be the primary factor driving the segment demand.

Air plasma was the dominant technology segment in 2015 and accounted for 36% of the global thermal barrier coatings market share. The high-velocity oxygen fuel (HVOF) segment was valued at USD 3.5 billion in 2015. This technique enables the use of various materials including metals, ceramics, and alloys to produce coatings of exceptional hardness, improved adhesion, and corrosion and wear resistance. Rising application scope of this technology in thermal coatings is also expected to drive its demand over the projected period. Cold spray technologies are expected to gain traction due to increasing application scope in the automotive and semiconductor industries.

Ceramic YSZ led the market in 2015 owing to its superior thermal resistance properties and longevity. The segment is projected to witness the highest CAGR during the forecast period due to growing application scope in gas turbines of stationary power plants, aero-engines, and automotive components and parts.

Aluminum oxide (Al2O3) coating combination accounted for 23.4% of the global share in 2015. Incorporating alumina in YSZ TBC improves bond strength, hardness, and oxidation and corrosion resistance. Rising demand for aluminum oxide in applications that primarily use ceramic coating materials for multi-layer coating functions is expected to drive the demand for Al2O3.

The stationary power plant application segment is projected to register the highest CAGR of over 7.2% during the forecast period. This growth can be attributed to the increased requirement for gas turbines that can withstand high operating temperatures over 1,500°C. Moreover, increased demand for energy due to growing population, urbanization, and changing lifestyles is also expected to benefit the segment growth during the next eight years. 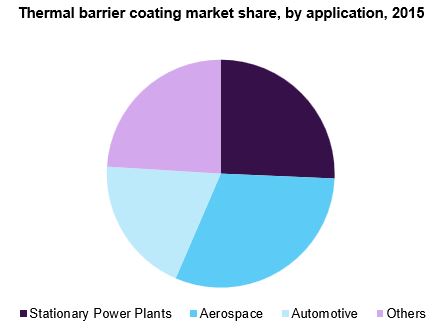 The automotive sector holds a significant share in the TBC market. The segment is projected to witness significant growth over the forecast period due to escalating demand for automobiles and heat resistant coatings in automotive parts. Increasing application scope in engine components, such as pistons, cylinder heads, and related components, is also expected to drive the segment in the years to come.

The Asia Pacific regional market is likely to witness considerable growth over the coming years due to rapidly expanding end-use application sectors in the region. China is estimated to register a CAGR of nearly 9% during the forecast period. This can be attributed to the rapid growth in the end-use application industries, such as stationary power plants and automotive, in the country.

North America led the market in 2015 with an estimated revenue of USD 3,598.6 million. The region is expected to witness moderate growth owing to the mature nature of the market.

Some of the key companies in the market are Air Products & Chemicals, Inc.; The Welding Institute (TWI) Ltd.; H.C. Starck, Inc.; and ASB Industries Inc. Most of these players are focusing on new product development as part of marketing strategies to strengthen their market positions. Other strategies adopted by these players include regional expansion and R&D. Small-scale companies mostly focus on distribution enhancement strategies to improve their product presence in the global market through e-commerce and similar platforms.