The global thermoplastic elastomer market size was valued at 3.82 million tons in 2014. Increasing consumption across various applications such as footwear, consumer goods, electronics, and construction has been instrumental in the global market growth over the last few years. Increasing demand in automotive component manufacturing is expected to be a major factor driving the global industry growth over the forecast period. Regulatory intervention by environmental agencies aimed at carbon emission reduction through an increase in fuel efficiency has forced major automotive OEMs to incorporate plastics as a substitute to metals and alloys in automotive components. 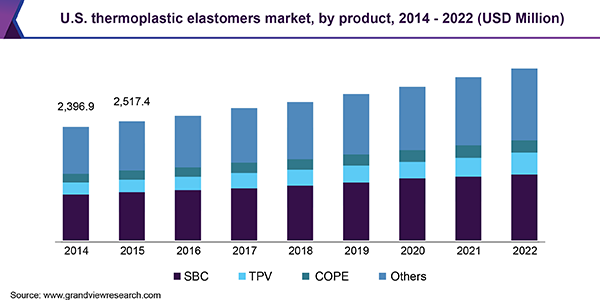 TPEs are unique, eco-friendly thermoplastics that are not only recyclable but can also be re-molded and re-shaped, thereby eliminating wastage quite extensively. These offer various other advantages in terms of physical attributes & characteristics such as resistance to chemicals, UV, oxidation, and providing soft-touch to materials. These properties are increasingly driving rubber and conventional plastic material replacement by TPEs in their respective applications. Several federal bodies such as FDA, US Pharmacopeia regulate product applications in numerous end-use industries to ensure utmost consumer health and safety. These regulations affirm TPE utilization for commercial applications by providing guidelines for prudent product usage.

Key products analyzed for the global TPE market include SBC, TPV, and COPES and others such as thermoplastic polyamides & melt-processable rubber. Additionally, each product has been segmented based on their respective applications. SBC was the largest consumed product with its demand estimated at 1,889.2 kilo tons in 2014. SBS is a major SBC product consumed which accounted for over 70% of the product volume in 2014. Increasing demand for SIS particularly in China and India is expected to drive the product segment growth over the next seven years.

Increasing consumption in automotive under the hood applications and fascia systems is expected to be a major factor driving the global TPV consumption. TPU is gaining prominence in construction applications owing to its thermal and acoustic insulation properties. Growing importance of energy efficiency in buildings and subsequent regulatory policies aimed at zero energy buildings are expected to drive TPU demand in construction over the next seven years.

Automotive was the largest application sector while accounting for over 60% of the global TPE market share in 2015. Favorable regulations pertaining to thermoplastics consumption in automotive applications as substitutes for metals and alloys along with growing passenger car production in the U.S. and Mexico is expected to further complement the North American market and eventually global market over the forecast period. 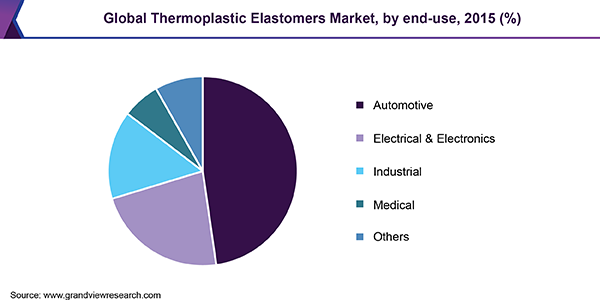 Increasing awareness regarding consumer safety and protection in electronics & electrical industries is also expected to drive the global TPE market throughout the forecast period. TPEs are well suited to electronic and electrical applications owing to high performance, easy coloring, soft feel, and aesthetic appeal. They are also bad conductors of electricity and provide insulation against heat along with resistance to chemicals and UV, leading to rising applications in electrical connections while building residential or functional complexes. TPU is widely used in mobile phone manufacturing as phone case cover and in connectors.

Asia Pacific thermoplastic elastomer (TPE) market emerged as the largest consumer and accounted for over 40% of the overall volume in 2014. China, India, and Japan are major consumers in APAC and accounted for over 85% of the regional volume in 2014. High construction and automotive industry growth in China & India along with increasing footwear and electronic goods production in Southeast Asia is expected to drive further TPE demand in APAC over the forecast period.

North America is characterized by heavy R&D by domestic companies aimed at product innovation and increased application scope. Structured regulatory policies pertaining to application-specific plastics consumption and disposal is expected to have a significant impact on the regional market growth. Increasing automotive production in the U.S. and Mexico along with construction and consumer industries’ growth in Mexico is expected to drive North America TPE demand over the forecast period.

Key manufacturers such as Muller Kunststoffe and Zeon have started capacity expansions in China and Japan respectively. The presence of a huge number of small-scale domestic manufacturers in these regions is expected to strengthen competition among companies. Mitsubishi is actively investing in R&D to improve production processes by eliminating toxic ingredients (phosgene) and developing plant-based bio-based thermoplastic elastomers.

This report forecasts revenue and revenue growth at global, regional & country levels and provides an analysis of the industry trends in each of the sub-segments from 2012 to 2022. For this study, Grand View Research has segmented the global thermoplastic elastomer market on the basis of product, and region.