The global transformer oil market size was estimated at USD 1.56 billion in 2016 and is expected to grow at a rate of 11.5% from 2017 to 2025. Expansion in the power sector to meet growing electricity requirements has driven significant progress in the transformers industry. The increasing focus on rural electrification in emerging economies such as India and China, coupled with a widespread awareness regarding equipment maintenance has driven market demand.

Rapid urbanization, drastic industrialization and progressive access to modern electricity grids in major parts of rural areas in Asia Pacific have led to an increase in electricity consumption. The electricity demand in this region alone has nearly doubled in the last few years. Growing consumer requirements and exponential development in distribution networks have also contributed to industry growth.

These oils are used for insulating power equipment, dissipating heat, and contributing to cooling systems. Modernization of the existing transformers and replacement of old ones has largely influenced growth in developed economies such North America and Europe.

Transformer installation is a time-consuming and expensive process, further implicated by volatile raw material prices for copper and electrical steel, which has hampered market growth in recent years.

Mineral-based oils emerged as the dominant product occupying over 82% of the volume share in 2016. Ease of availability and high compatibility with diverse equipment has made it popular across a wide range of applications in capacitors, high voltage switches, and circuit breakers. This segment is further categorized into naphthenic base oils and paraffinic base oils.

Paraffinic base oil is utilized for its low cost and availability across diverse global regions. Crude naphthenic oil is found in limited countries including China, Brazil, Australia, the U.S., and Venezuela, restricting its penetration in the global industry.

Bio-based oils are expected to emerge as the fastest-growing products with an approximate CAGR of 14% from 2017 to 2025. Stringent environmental regulations regarding energy consumption & emissions, coupled with high investments in the renewable energy sector are expected to positively influence the growth.

Silicones have a higher thermal stability as compared to mineral oils; however, high price & limited availability has restricted its use on a larger scale. However, the product is increasingly replacing conventional mineral oils owing to enhanced properties and compatibility with equipment.

Small-scale transformers dominated the transformer oil market with over 48% overall revenue in 2016. These systems are extensively utilized to meet burgeoning electricity needs in small localities or rural areas with limited space.

Growing urbanization and electrification of rural areas in Southeast Asian countries such as India, Bangladesh, and Sri Lanka has contributed significantly to segment growth. Consumers also tend to go in for bulk purchases to offset high costs associated with complicated filling processes, which has driven higher market volume and sales in recent years. 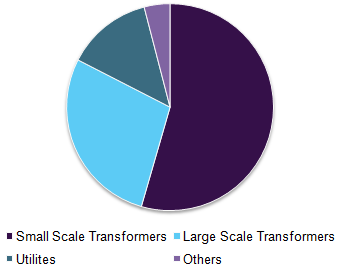 Large-scale segment is expected to grow at a CAGR of 11.1% from 2016 to 2025. Eco-friendly transformers are in great demand owing to the implementation of strict environmental regulations that have fostered lower carbon emissions and higher energy efficiency. Technological progress, greater industrial output, and progressive R&D to introduce enhanced energy generation & recovery equipment has driven segment growth.

Utilities are majorly used in renewable energy production. Solar power plants and windmills are generally associated with such transformers, mostly for offshore wind energy production. This equipment also requires maintenance oils that can sustain high moisture levels, air pressure, and extreme atmospheric conditions. The segment is anticipated to grow at a slower pace as compared to the other two segments.

Asia Pacific emerged as the leading consumer, accounting for over 51% of the total volume in 2016. Increasing need to upgrade & transform existing electricity distribution infrastructure in developing countries such as India, Vietnam, Thailand, and Indonesia is one of the major driving forces for such products.

China accounted for approximately 44% of the Asia Pacific market. Most of the cities in China are well equipped with electric poles, connection lines, and have widespread distribution networks, generating the need for upkeep & maintenance of equipment by utilizing efficient oils.

North America emerged as the second largest consumer and is expected to grow at a moderate pace owing to maturation of the manufacturing & industrial sectors, especially in the U.S. and Canada. Modernization of the existing transformers and technical upgradation, coupled with declining crude oil prices are expected to propel growth in the country.

New companies are expected to engage in extensive R&D or undertake M&A via collaborations with existing players to gain a competitive advantage in the sector. Existing multinationals are also adopting acquisitive & expansive strategies to consolidate their positions in the market. One such example is the recent acquisition by Sinopec, who took over Addax Petroleum Corp AXC, a major oil & gas exploration and production company based in Switzerland.

This report forecasts volume & revenue growth and provides an analysis on the latest trends in each of the sub-segments from 2014 to 2025. For the purpose of this report, Grand View Research has segmented the global transformer oil market on the basis of product, application, and region: