The global transparent ceramics market size was estimated at USD 178.5 million in 2015. It is projected to expand at a CAGR of 22.4% from 2016 to 2024. Rising demand from various end-use industries is likely to spur global market expansion in near future.

As the market is application driven, market participants are focusing on research and development (R&D) activities to develop new products and to increase the scope for applications. Market growth is driven by novel applications in photography and other imaging devices. 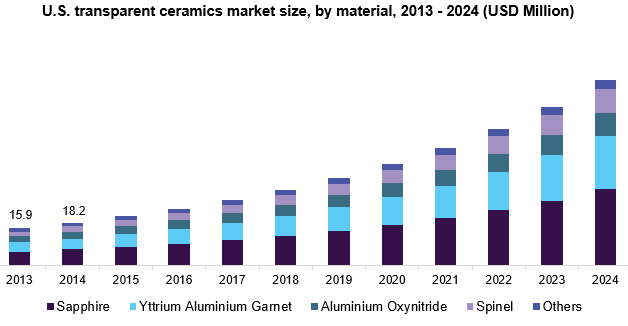 New product developments by key companies coupled with low-cost and technologically advanced products have given rise to replacement of traditional glass. Many industries are adopting transparent ceramics due to their lightweight, better visibility, and strong durability.

For instance, when sunlight passes through solar panels, the double-wall glass absorber pipe is heated to about 400°C. It is pumped to a power block where it passes a heat exchanger that generates steam, which drives a conventional turbine. Normal tempered glass has a 315°C melting point and it cannot survive these temperatures. Transparent ceramic glass, on the other hand, has a higher melting point of around 800°C.

Continuous efforts from key players in research and development have resulted in widening application scope of the product. Recent developments have enabled shaping of ceramics in different forms such as tubes and rods. They are utilized in numerous mechanical and chemical industries such as abrasives, furnaces, semiconductor equipment, and lighting among others

Sapphire held the largest share in 2015, accounting for 41.4% of the global market. Demand for sapphire is expected to grow at a noteworthy pace owing to positive outlook for optoelectronics in emerging economies of Asia Pacific. Increasing production of electronic devices with touchscreen displays using sapphire in economies such as China, Japan and India is anticipated to provide impetus to market growth.

Yttrium aluminum garnet is presumed to witness substantial CAGR in Asia Pacific on account of increasing industrialization and investments in defense sectors. Rising defense expenditure by developing countries such as India and China is anticipated to thrust growth in near future. In addition, increasing focus on deployment of laser and cutting tools is expected to drive the regional growth between 2016 and 2024.

Spinel is anticipated to witness a CAGR of 18.7% over the forecast period. It is a highly durable polycrystalline ceramic with optical transparency ranging from near UV through MWIR spectrum. The growth of spinel transparent ceramics can be credited to their increasing application in reconnaissance windows, lenses, domes, and sensor windows.

Monocrystalline transparent ceramics dominated the overall market in 2015, accounting for a share of 53.3%. They are majorly used in ceramic brackets in dental applications. Increasing adoption of ceramic brackets in the healthcare industry is anticipated to propel market growth over the next eight years.

In addition, the material is majorly used in solar panels on account of its high melting point and low corrosion ability. It is used for insulation in solar Photovoltaic (PV) panels, owing to upward trend of using renewable energy. This, in turn, is expected to boost market growth in near future.

Polycrystalline is expected to witness a rapid and significant growth over the next eight years on account of its superior features such as narrow output tolerance, long term reliability, high resistance to mechanical loads, and environmental friendliness. Demand for polycrystalline transparent ceramic material is presumed to be fueled by its unique features such as ease of manufacturing, superior mechanical properties (modulus, hardness, and strength), performance at high-temperature environments, and chemical durability.

Optics and optoelectronics dominated overall transparent ceramics market in 2015. The segment is expected to emerge as the largest application segment in near future. New product developments together with low cost and advanced technologies are driving growth of this application segment.

Growing use in spectacles as a substitute for conventional glass is expected to fuel the global demand growth over the forecast period. Owing to increasing utilization in Complementary Metal-Oxide-Semiconductor (CMOS), Charge-Coupled Devices (CCDs), image and display sensors, couplers, and transmitters; the segment is anticipated to capture a significant market share from 2016 to 2024. 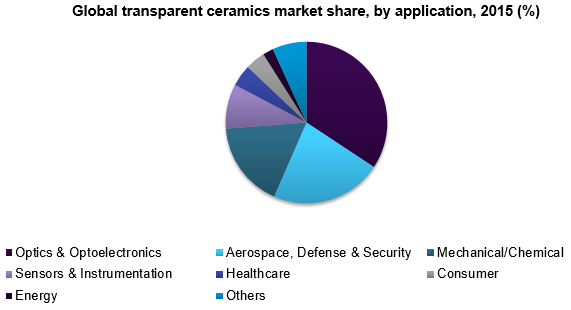 Mechanical/chemical is estimated to be the fastest-growing application segment in the forthcoming years. Constant efforts from companies in terms of R&D have widened application scope for transparent ceramics. Latest developments have enabled shaping of ceramics in various forms such as test-tubes, tubes, and rods. These tubes and rods have applications in various mechanical and chemical sectors such as abrasives, furnaces, semiconductor equipment, lighting, and many more.

Asia Pacific emerged as the largest regional market in 2015. It is projected to witness tremendous growth on account of high government spending on the infrastructure sector and rising opportunities for Foreign Direct Investment (FDI) in China and India. Demand for industrial, transportation, and commercial facilities is expected to further drive growth over the forecast period.

Demand for transparent ceramics in Asia Pacific is largely driven by growing aviation sector. Transparent ceramics are widely used in helicopters and planes as sensors, armors, and ceramic guards. With rising governmental support, APAC has the potential to develop a viable aircraft industry, and it could very well become a significant player in the aviation sector, dominated by North America.

Latin America emerged as a lucrative market for transparent ceramics. Emerging economies in Latin America have stronger growth prospects. In general, emerging markets are projected to grow significantly faster than the U.S. over the next several years. Brazil is expected to witness a substantial growth owing to the increasing expenditure on defense by the government.

The global market is extremely competitive with major players engaged in constant product innovation through research and development. The continuous efforts made by key players in research and development has resulted in widening the application scope of the product. The recent developments have enabled shaping of the ceramics in different forms such as tubes and rods.

Some of the major players are Saint-Gobain S.A., Schott A.G, and Surmet Corp. These market participants have a strong foothold in R&D and well-recognized brands and products, thus making it difficult for the new entrants to sustain in the market.