The global transplant box market size was valued at USD 7.5 billion in 2019 and is expected to expand at a compound annual growth rate (CAGR) of 8.6% from 2020 to 2027. Rising cases of multiple organ failure coupled with an increasingly aging population are the major factors driving the growth of the market for transplant boxes. In addition, growing government and NGO initiatives to encourage organ donation, as well as the adoption of technologically advanced products, are few other factors contributing towards market growth. 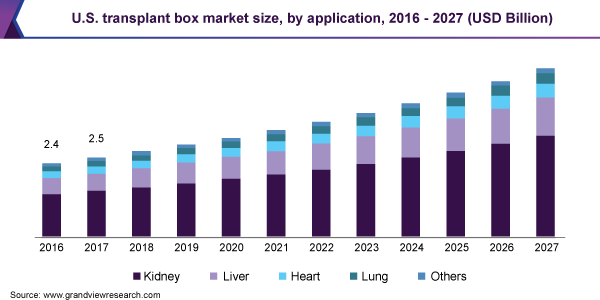 Rising cases of organ failure result in the increased number of organ transplant procedures globally, thereby, expected to propel market growth. Increasing incidences of chronic disorders are also expected to boost the growth of the market for transplant boxes over the forecast period. For instance, cardiovascular diseases have become one of the major causes of mortality and morbidity over the last three decades.

As per the American Heart Association (AHA) in 2018, over 92.1 million people in the US are suffering from CVD and it is the most common cause of mortality in the country as compared to the other chronic illnesses. Similarly, according to the World Atlas Report, Russia has the highest prevalence of CVD, and around 57% of the mortality cases in the country are caused by CVD. Thus, escalating cases of cardiovascular disorders are anticipated to surge the rate of heart transplants, thereby propelling the growth of the market for transplant box. Furthermore, the increasing prevalence rate of chronic liver ailments such as liver cirrhosis is also expected to boost market growth over the forecast period. For instance, as per the NCBI in 2019, over 2.0 million deaths occur due to liver diseases each year globally and around 1 million deaths occur due to complications of lung cirrhosis. In addition, liver transplantation is the second most transplanted organ after kidney. As per the NHS 2019 Report, in the last 10 years, more than 8,740 liver transplants were reported in the U.K. Such instances indicate significant growth of the market for transplant box.

Moreover, the elderly population is more likely to suffer from dysfunction of various organs such as kidney, liver, and heart. For instance, as per the U.S. Government Information on Organ Donation and Transplantation, in 2019, 63% of the population who had organ transplants were in the age group of 50 years or older, and 21% of all organ transplant recipients were 65 or older. Thus, increasing the geriatric patient population globally would boost the growth of the market for transplant box in the near future. Moreover, the growing geriatric population in the countries such as Japan, China, Italy, Germany, the U.K., and Brazil is expected to grow at the fastest rates in the shortest span of time in the future. For instance, according to the World Bank, in 2018, more than 20% of the population in Japan is over the age of 65 years and this country has the oldest population in the world. Hence, the rising geriatric population is leading to the higher occurrence of organ failures, thereby, positively supporting the growth of the market for transplant box.

Additionally, growing government initiatives to promote organ donation is further anticipated to influence the market for transplant box over the forecast period. As per the Health Resources and Services Administration (HRSA), more than 109,000 people are on the national transplant waiting list as of September 2020 in the U.S., and every nine patients are added to this list. On average, about 20 Americans die every day from the lack of available organs for transplant. Thus, various awareness campaigns are organizing across the globe targeting the people to educate them about the donation of body parts. This is anticipated to positively impact the market for transplant box. For instance, 12th October is celebrated as European Day for Organ Donation and Transplantation to raise social awareness related to the importance of organ donation for transplant. Furthermore, in 2020 the HRSA Division of Transplantation launched the “Hospital Organ Donor Campaign” which led to an increased number of organ donations from the previous year. It has added more than 59,000 donor registration from 1,700 hospitals between October 2019 and May 2020. Therefore, such initiatives are anticipated to promote the growth of the market for transplant box over the forecast period.

Countries such as the U.S. and Canada have witnessed a high prevalence rate of chronic disorders such as cardiovascular disorders, CKD, liver disease, and other chronic conditions. For instance, as per the CDC report 2019, it reported that around 80.0 million people, which is around 1 in 3 American adults is at risk for chronic kidney disease and it is the ninth leading cause of death in the U.S. Similarly, as per the NIDDK research report, 1 in 400 individuals in the U.S. are living with cirrhosis and is more common in adults ages 45 to 54. Furthermore, according to the Institute for Health Metrics and Evaluation (IHME) data published in 2017, ischemic heart disease was the leading cause of deaths and disabilities in Canada. The prevalence of heart diseases in Canada is high, which imposes an annual financial burden of around USD 22.0 billion on the government. Such a high incidence rate of chronic disorders has resulted in increased cases of organ failures. This is anticipated to boost the growth of the market for transplant box over the forecast period.

Additionally, technological advancements are a major driver accelerating the growth of the market for transplant box. Manufacturers constantly strive to introduce technologically advanced devices to overcome various challenges such as the short duration of organ survival prior to the transplantation. For instance, in March 2020, a Dutch biotech company-MIMETAS introduced assay ready product line for organ-on-a-chip, OrganoPlate. This product provides a platform for the development of organ models, such as blood vessels, gut, kidney, liver, and brain tissues. Furthermore, in April 2019, XVIVO Perfusion secured U.S. FDA PMA approval for its XPS and disposable products intended for ex-vivo lung perfusion (EVLP) of initially unacceptable donated lungs. With this approval, the system is now available for all customers in the U.S. without any Humanitarian Device Exemption (HDE) restrictions.

The kidney segment dominated the transplant box market and accounted for a revenue share of 56.6% in 2019. Increasing cases of chronic kidney diseases and subsequent kidney failures are expected to surge the kidney transplant rate. According to the CDC in 2019, around 15.0% of adults in the U.S. suffer from chronic kidney diseases every year. Similarly, according to the statistics from National Kidney Foundation (NKF), it is estimated there are more than 2.0 million people around the world suffer from chronic kidney disease and millions of people die from this condition every year. The number of patients continues to increase at a rate of 5-7% per year and receive treatment with a kidney transplant or dialysis to stay alive. As per the NIDDK statistics, in 2017, more than 500,000 patients have gone through dialysis treatment and more than 200,000 people are living with a kidney transplant. Therefore, such factors are anticipated to fuel the segment growth during the forecast period. 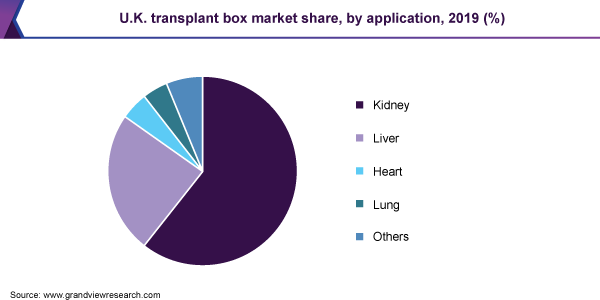 Furthermore, according to the current rate of adoption and future growth prospects, liver and heart transplants are also expected to witness high demand, respectively. For instance, liver transplant has become a life-saving procedure for patients with acute liver failure and alcoholic liver disease. Similarly, heart transplantation is currently regarded as the gold standard of treatment, as it has revolutionized end-stage heart failure therapy. This is expected to promote the market for transplant box over the forecast period.

In Asia Pacific, the market for transplant boxes is expected to witness the highest CAGR of 9.6% from 2020 to 2027. This is attributed to the increasing healthcare expenditure and rising patient awareness regarding organ donation. Furthermore, the increasing incidence of chronic disorders along with the growing aging population, and rising healthcare expenditure are also anticipated to drive the market for transplant boxes in the forthcoming years. In addition, the low cost of surgical procedures in this region allows a large number of patients to visit for medical reasons. Thus, an increase in the number of chronic diseases leading to organ failure and a rise in medical tourism has contributed significantly to the growth of the market for transplant boxes in the region.

Key companies are engaged in the development of innovative products and regional expansion to garner higher market share in the industry. For instance, in June 2019, TransMedics has received US FDA Pre-Market Approval (PMA) for expanded clinical indications of the OCS Lung System. This device is designed for the ex-vivo evaluation and preservation of the donor's lungs. In addition, this system is likely to be utilized with both donors after cardiovascular death and brain death.

In addition, market leaders are involved in extensive research on the development of advanced brain implant technologies. Subsequently, the introduction of new products is expected to provide the market for transplant box with lucrative growth opportunities. For instance, in March 2020, Paragonix Technologies announced that AdventHealth (Florida) has approved its Paragonix SherpaPak CTS for the preservation of donor's hearts for transplantation. Moreover, the emerging players in the market for transplant box are focusing on fund raining activities to support the R&D growth and product commercialization activities. For instance, in January 2020, the company received a Euro 4.6 million investment from BGF- the U.K. and Ireland’s investors. This investment will help in the commercial expansion of its product- OrganOx Metra in the US, building on commercial traction in Canada, Europe, and Australia. This is expected to improve the company’s revenue and global presence in the coming years. Some of the prominent companies in the transplant box market include:

This report forecasts revenue growth at global, regional, and country levels and provides an analysis of the latest industry trends in each of the sub-segments from 2016 to 2027. For the purpose of this study, Grand View Research has segmented the global transplant box market report on the basis of application and region:

How big is the transplant box market?

What is the transplant box market growth?

Which segment accounted for the largest transplant box market share?

b. North America dominated the transplant box market with the highest share in 2020. This is attributable to rising healthcare awareness coupled with well-developed healthcare facilities and the presence of many major biotechnologies and medical devices manufacturing companies in this region.

Who are the key players in transplant box market?

What are the factors driving the transplant box market?

b. Key factors driving the transplant box market growth include rising demand for organ transplantation owing to unhealthy dietary habits, alcohol consumption, lack of exercise, and drug abuse which are the leading causes of organ failure.