The global two wheeler hub motor market size was estimated at USD 8.2 billion in 2019 and is anticipated to witness a CAGR of 9.7% from 2020 to 2027. Hub motor is an electric motor integrated into the vehicle’s wheel hub assembly. The motor uses the electric energy stored in the battery by converting it into rotary motion, thereby driving the vehicle’s drivetrain. These types of motors are generally used in electric vehicles. The changing end user preference towards the adoption of zero-emission vehicles owing to increasing awareness of global warming is anticipated to fuel market growth. Moreover, favorable government policies such as stringent regulations to curb the (CO2) emission, and subsidies for electric two-wheeler manufacturers and end-users are also projected to uplift market growth over the forecast period. 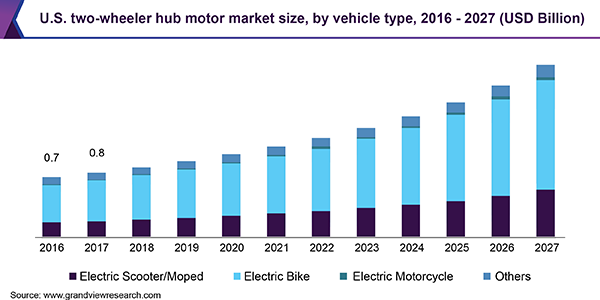 Besides, hassle free installation, cost-effective, and better performance are some of the benefits of two-wheeler hub motors as compared to mid-drive motors. Thus, in-wheel/hub motors are anticipated to emerge as the preferred choice for electric two-wheeler manufacturers. In addition, amplified power, high-torque, better vehicle handling, and improved vehicle range are some factors that have fostered industry growth.

Currently, for electric vehicles, the hub motor is gaining popularity, as it helps in reducing maintenance costs, and offers improved driving experience due to its advantages such as lightweight, flexibility, high power efficiency, elasticity, and compact sizes. In addition, two-wheeler hub motors eliminate the need for axles, transmission, and driveline, by eliminating the main powertrain in electric vehicles. Thus, it helps to reduce mechanical losses important in all components between the wheel and engine, thereby resulting in a quieter running vehicle and lesser noise generation.

Moreover, several governments across the globe are taking initiatives to curb rising pollution levels. The governments are expected to implement regulations, objectives, and policies for electric vehicle deployment, thus, signaling OEMs and other industry stakeholders to actively participate in increasing the adoption of electric vehicles. Their aim is to increase the electric two-wheeler penetration amongst the end-user by building confidence through mobilizing investments in the form of attractive discounts, sharing services, and carrying out awareness campaigns. For instance, the governments of countries such as India, China, and the U.S. have subsidized the purchase of e-scooters, e-bike, and e-motorcycles to promote the adoption of environment-friendly transportation. Such initiatives are likely to aid in the growth of the electric two-wheeler industry, thus augmenting the overall market growth.

Additionally, several traditional vehicle manufacturers announced their strategic plans to launch new high-powered electric two-wheelers in a span of the next two to three years. For instance, in 2019, HARLEY-DAVIDSON launched e-motorcycle LiveWire and is available on sale at Harley-Davidson dealerships in Canada, U.S., and European countries. Similarly, in October 2019, Okinawa Autotech Pvt. Ltd. announced to launch a premium electric motorcycle by 2020, which would be a direct competitor to Revolt RV400 in India. Therefore, intense market competition is anticipated to trigger the demand for electric motorcycles, which in turn would proliferate the demand for high-powered two-wheeler hub motors over the forecast period.

Based on vehicle type, the market is segmented into electric scooter/moped, electric bike, electric motorcycle, and others, which include electric kick scooters and electric skateboards. The electric bike segment dominated the market in 2019 and was valued at USD 4.6 billion. The two-wheeler hub motors are prominently used in electric bikes owing to factors such as increased power/speed, high torque, extended range per single charge. It offers better vehicle handling to both existing and new vehicles due to its lightweight design. For instance, the growing support from regulatory bodies in Norway and France and the OEM’s efforts to expand the present electric bike fleet are anticipated to drive the sales of electric bikes from 2020 to 2027.

The electric motorcycle and electric scooter segments are anticipated to exhibit a CAGR of 11.9% and 10.6% respectively, from 2020 to 2027. This can be attributed to the growing sales of these vehicles, fueled by various governments’ initiatives in the form of incentives and subsidies. For instance, in U.S., the goal of the Governor of California to reach 1.5 million zero-emission vehicles by 2025 is contributing to the regional demand. U.S. is expected to emerge as a favorable adopter of electric scooters as new products are being introduced and various large-scale manufacturers, such as Mahindra GenZe, have entered the U.S. market.

Based on the installation, the two wheeler hub motor market is segmented into rear and front hub motor. The rear hub motor segment accounted for the majority share of the overall market in 2019 and was valued at USD 7.5 billion. The manufacturers prefer to install two-wheeler hub motors to the rear wheel as it offers better traction, improved stability, and higher vehicle performance. Therefore, the market is also anticipated grow over the forecast period.

Based on motor, the market is segmented into geared hub motor and gearless hub motor. The geared hub motor segment dominated the market in 2019 and is projected to continue the trend over the forecast period. Geared two-wheeler hub motors have planetary gears to reduce the speed of the vehicle, though; they allow the motor to rotate at faster speeds. Two-wheeler hub motors are commonly geared type for better durability and speed control. Moreover, geared motors are smaller in size and are lightweight, and are hence preferred by majority of the electric 2-wheeler manufacturers. Hence, the segment accounted for over 79.0% share of the overall market revenue in 2019.

Gearless two-wheeler hub motors are capable of providing large amounts of power and torque. This makes them especially well-suited for higher performance electric vehicles. However, they are generally heavy and bulky which adds to overall vehicle weight and reduces vehicle performance. Therefore, OEMs select geared or gearless motor as per the required weight and power of the vehicle. Moreover, the gearless hub motor segment is expected to witness a CAGR of 8.4% over the forecast period.

Based on sales channel, the market has been segmented into OEM and aftermarket. OEM’s dominated the market in 2019, as majority of the end users prefer to buy two-wheelers with company fitted electric motors. In addition, the increasing preference of end-users for electric scooters and motorcycles as a replacement of traditional scooter or motorcycle for daily commute is one of the influential factors driving growth of the OEM segment. Besides, the rising rate of exporting and manufacturing electric two-wheelers is also responsible for the increasing market shares of the OEM segment over the forecast period.

However, aftermarket segment is expected to witness a CAGR of 8.1% from 2020 to 2027. Majority of startups and SMEs operating in the industry are concentrating more on modifying traditional bikes by integrating two-wheeler hub motor to either wheel to convert it into electric bike. Therefore, adoption of such trends within the business is anticipated to propel the growth of the aftermarket segment over the forecast period.

Based on power output, the market has been segmented into Below 1 kW, (1-3) kW, and above 3 kW. The motor with higher power output is preferred wherein the manufacturers want to increase the vehicle speed without affecting the vehicle’s performance. The electric scooters/mopeds, electric motorcycles, and some other models of electric two-wheelers use motors with power output above 1 kW. Hence, the demand high-power e-motorcycles and e-scooters is anticipated to bode well for motors with a power output of (1-3) kW and above 3 kW. Therefore, the (1-3) kW segment is projected to witness the highest CAGR of 10.6% over the forecast period. 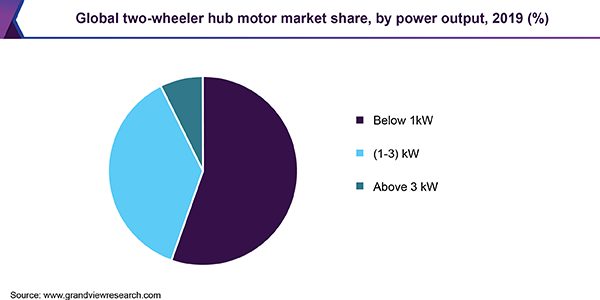 Whereas motors with power output below 1 kW are generally preferred for electric bikes, electric skateboards, and electric kick scooters. Moreover, the increasing adoption of electric bicycles across Europe and North America is anticipated to fuel segment growth. For instance, in Germany, sales for electric bikes grew by 37.0 percent in the first half of 2019 to 920,000 electric bikes; which almost equals the entire unit sales in the year 2018. Thus, the segment dominated the market in 2019 and was valued at USD 4.6 billion. Moreover, as of 2019, electric bikes accounted for over 50.0% share of the overall market, which in turn, is anticipated to fuel segment growth over the forecast period.

In the Asia Pacific, the market was valued at USD 4.7 billion in 2019. The growth of the market in this region is also mainly driven by China, Japan, India, and South Korea. China is the largest market two-wheeler hub motor in the Asia Pacific due to the presence of major two-wheeler hub motor manufacturers namely QS MOTOR, MAC SHANGHAI ELECTRIC MOTOR COMPANY LTD, TDCM, and NTN Corporation.

In North America, the market is anticipated to exhibit the highest CAGR of 11.1% from 2020 to 2027. This is owing to the rising focus of manufacturers on developing high-performance, cleaner, and faster electric vehicles. In the U.S., the leading OEMs such as LUNA CYCLE, Zero Motorcycles, Harley-Davidson, Xiaomi (United States), and Victory Motorcycles launched electric two-wheelers resulting in an enormous demand for two-wheeler hub motors. Moreover, benefits such as better torque control, powerful acceleration, and improved stability are anticipated to further boost the demand for two-wheeler hub motors.

This report forecasts revenue growth at global, regional, and country levels and provides an analysis of the latest industry trends in each of the sub-segments from 2016 to 2027. For this study, Grand View Research has segmented the global two wheeler hub motor market based on vehicle type, installation, motor, sales channel, power output, and region:

How big is the two wheeler hub motor market?

What is the two wheeler hub motor market growth?

b. North America dominated the two wheeler hub motor market with a share of 57.5% in 2019. The growth of the market in this region is also mainly driven by China, Japan, India, and South Korea.

Who are the key players in two wheeler hub motor market?

What are the factors driving the two wheeler hub motor market?

b. Key factors that are driving the market growth include the changing end user preference towards the adoption of zero-emission vehicles owing to increasing awareness of global warming, and several governments across the globe are taking initiatives to curb the rising pollution levels.