The U.S. cannabis market size was valued at USD 10.8 billion in 2021 and is expected to expand at a compound annual growth rate (CAGR) of 14.9% from 2022 to 2030. In the United States, cannabis is often used in the cosmetic, pharmaceutical, and food & beverage industries. The increasing legalization of cannabis and rising acceptance of its use for medical purposes are the key factors driving the growth of the market. The increasing research on the use of cannabis and its medicinal properties has led to its increased use to treat various chronic conditions. They are found to be effective in treating chronic pain and nausea caused due to chemotherapy. Furthermore, the constant rise in the legitimization of medical cannabis has resulted in the growth of the market. For instance, the Food and Drug Administration (FDA) has approved the use of cannabis-derived drug products such as Epidiolex, Cesamet, etc. for treating seizures, and chemotherapy-induced side effects respectively. Moreover, in December 2020, the U.S. House of Representatives passed the legislation to remove cannabis from “The controlled Substance Act of 1970”. This is anticipated to create enormous opportunities for market growth in the forthcoming years. 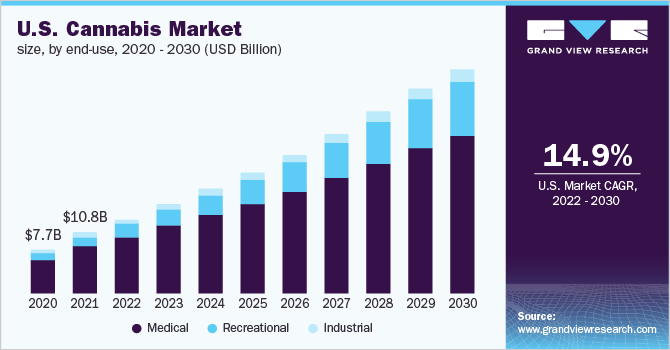 Moreover, a positive attitude of consumers towards the consumption of cannabinoid-based products has led to the increased penetration of abis. For instance, according to the Gallup Survey, 2022, approximately 64% of the U.S. adults were familiar with CBD and CBD products and as per the SingleCare Survey 2020, approximately one-third of Americans used CBD.

Also, the increasing number of companies entering the local markets to cater to the growing demand for cannabis is one of the factors supporting the market growth. In addition, a dynamic startup scene in the U.S. boosts the growth of the market for cannabis. For instance, as per an article published in TechCrunch, Dutchie, Inc., Oregon based company raised a Series D funding of around USD 350 million in 2021.

Other factors contributing to the growth include the favorable cultivation norms which help cater to the biomass demand in the U.S. Some major states such as Florida, Oregon, Nevada, California, Washington, and Colorado are the major producers of cannabis, owing to favorable climatic conditions and the legalization of medical marijuana. Furthermore, the increasing number of companies in cannabis businesses due to the ease with which wholesale procurement of cannabis can be carried out and product development can be achieved is driving the market growth in the U.S.

The COVID-19 pandemic resulted in the reduction in the strategic instances and revenues by various players. The factors responsible for the reduction in revenue include stringent regulation on trade and disruption in the supply chain due to lockdown in the U.S. In addition, despite the increase in the number of cannabis utilizers during the pandemic, there has also been a significant reduction in the price, which has led to a decrease in the market size, in terms of revenue.

However, with the improving situation in the region, there is an upsurge in the strategic developments by the key players, and this trend is anticipated to witness growth over the forecast period. In addition, the affirmative guidelines provided by the FDA for the continuation of the R&D activities concerning cannabis and CBD is anticipated to boost the growth of the U.S. cannabis market in the forthcoming years.

The medical segment accounted for the largest revenue share of 77.5% in 2021. The factors attributing to the largest share of this segment include the growing acceptance of cannabis for the treatment of various chronic conditions such as cancer, depression and anxiety, diabetes, arthritis, and epilepsy. Also, the approval of drugs for treating various conditions is contributing to the growth. For instance, Marinol and Syndros are the two specific drugs approved by FDA intended for treating the side effects associated with chemotherapy such as nausea and vomiting.

Also, the medical application of cannabis has witnessed massive expansion over the years due to the growing amount of scientific literature supporting its benefits in the treatment of various chronic diseases. Moreover, the number of U.S. states legalizing medical cannabis is increasing. For instance, as of April 2022, 37 U.S. states including Alaska, Arizona, Mississippi, Missouri, Montana, etc. have legalized the use of medical cannabis. Furthermore, the medical conditions for which marijuana is being used are also increasing, which is expected to open up new avenues for growth.

The marijuana segment accounted for the largest revenue share of 85.5% in 2021owing to the growing adoption of marijuana products and the high efficacy of marijuana-derived cannabinoids. Traditionally, marijuana flowers were used to stop the progression of Alzheimer’s disease. Furthermore, marijuana oil is used for the treatment of cancer and nausea and can also be used for the improvement of the sleep cycle and alleviating stress, pain, and anxiety. This is thus increasing legalization of medical marijuana is impelling the growth.

In addition, the segment is anticipated to witness the fastest growth rate over the forecast period owing to the changing perceptions toward cannabis-based products coupled with development in the regulatory frameworks. In addition, the use of cannabis for recreational purposes as well as medical purposes is impelling the growth of the segment. This can be justified by the increase in the adoption of marijuana-based medical products for medical conditions by a large number of patients.

The CBD segment held the largest market share of 66.3% in 2021, owing to the acceptance of CBD products due to its medicinal properties and lack of psychoactive effects. It is used to treat various conditions including anxiety, depression, stress, seizures, etc. Epidiolex is an FDA-approved prescription CBD drug used to treat seizures associated with Lennox-Gastaut Syndrome. Also, the high demand for CBD for health and wellness purposes is a major factor responsible for the largest share of the segment.

Moreover, the legalization of CBD in some states of the U.S. due to the sanctioning of the U.S. Farm Bill 2018 created enormous opportunities for segment growth. Also, the favorable government regulation allowed several players to enter the market, thereby fueling the growth of the segment. 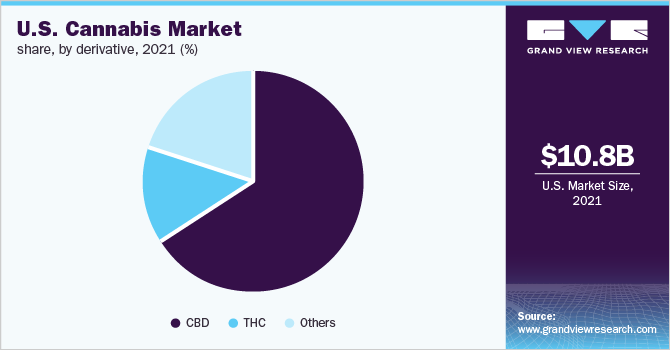 However, the other segment is anticipated to grow at the fastest CAGR over the forecast period owing to the rising number of research claiming the benefits of minor cannabinoids, such as CBC, CBG, and CBDa. Furthermore, an increase in the number of players in the country providing minor cannabinoid products and rising awareness regarding the health benefits offered by them are expected to fuel the segment growth over the forecast period.

The increasing demand for cannabis is likely to propel the entry of new companies in the future, fueled by increasing awareness and acceptance regarding cannabis use for medical purposes. Strategic alliances in the form of mergers & acquisitions, collaborations, partnerships, and product launches with other market players are some of the initiatives being undertaken by key market players to increase their market shares.  For instance, In June 2021, Mile High Labs and Royal DSM entered into a strategic partnership to develop and commercialize the next generation of science-backed cannabinoid consumer products. Such initiatives are likely to boost the growth of the market for cannabis over the forecast period. Some prominent players in the U.S. cannabis market include:

This report forecasts revenue growth at the country level and provides an analysis of the latest industry trends in each of the sub-segments from 2016 to 2030. For this study, Grand View Research, Inc. hassegmented the U.S. cannabis market report based on end-use, source, and derivative:

How big is the U.S. cannabis market?

What is the U.S. cannabis market growth?

Which segment accounted for the largest U.S. cannabis market share?

b. Medical dominated the U.S. cannabis market with a share of 77.8% in 2021. This is attributable to the recent legalization in various states coupled with the increasing adoption of medical marijuana for the treatment of various medical conditions.

Who are the key companies/players in U.S. cannabis market?

What are the factors supporting U.S. Cannabis Market growth

b. Rising legalization and increasing awareness regarding health benefits pertaining to cannabis consumption is driving the market growth