The U.S. energy drinks market size was estimated at USD 14.30 billion in 2016. Heightened health awareness and busy lifestyles coupled with an increase in consumer awareness regarding health benefits of the product have helped in keeping the demand for energy drinks high in the U.S. Nearly 60.0% of male and 40% of the female population in the U.S. are regular consumers of these beverages and this trend is further estimated to boost market growth during the forecast period.

There have been rising concerns regarding this beverage consumption because of high caffeine presence. Excess use has been associated with health risks, which include sleeplessness, frequent urination, and abnormal heart rhythms. Such health risks associated are expected to restrain the growth of the market over the forecast period. 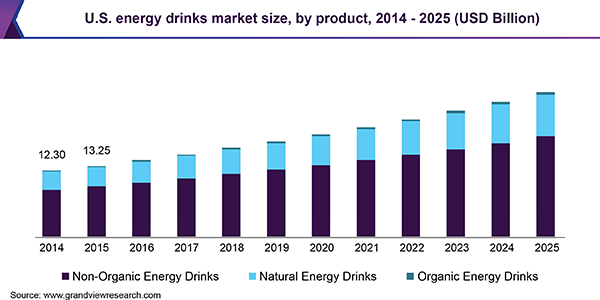 Red Bull and Gatorade are among the most popular brands and hold prominent positions in the market. Other popular brands include Rockstar, Monster, NOS, Amp, Full Throttle, Arizona Energy, and Xyience. Trends have shown that major industry participants implement similar strategies to survive the competition and maintain their market share.

In the U.S., obesity has been cited as a critical health issue in recent years. It may result in diseases such as coronary heart problems, which may further lead to mortality. While several developed nations have witnessed an increase in obesity rates, the rates in the U.S. are the highest. Every two out of three individuals are overweight in the U.S. and each year, the country witnesses approximately 120,000 preventable deaths. The obesity problem and growing awareness regarding its harmful effects are restricting the consumption of energy drinks in the U.S.

Product positioning plays a critical role in the sales of consumer goods. Various studies have proved the relation between product placement in shelves and their seals. The display of goods generates a cognitive attraction, which generates a positive perception of the product. Thus, energy drink manufacturers have been emphasizing on product positioning to augment their sales.

However, performance enhancement from these drinks comes solely from caffeine and sugar in tandem with additives for add-on effects. These products might contain high caffeine quantity and their unregulated consumption can lead to common side effects such as irritability, anxiety, and panic attacks.

The natural segment represented more than one-fourth of the overall revenue in 2016. Natural products are free of artificial flavors and preservatives/chemicals. Moreover, the caffeine used is also natural caffeine from guarana, green tea, or green coffee with the use of sugar, which is almost in a natural state. Flavors and sweeteners used are also taken from juices.

In terms of the target consumers, the U.S. energy drinks market has been segmented into adults, teenagers & kids, and the geriatric population. The adult segment held approximately half of the revenue in 2016. Rising product consumption by working individuals to maintain a healthy lifestyle is likely to be the primary growth stimulant for the segment.

Furthermore, increasing consciousness regarding diet and intake among working individuals and sports athletes to maintain nutritional balance in their body is poised to promote the demand for energy drinks among adults in the U.S. over the forecast period.

Teenagers and kids also command a sizeable share in the market owing to a rising millennial preference for unconventional drinks with unique taste and flavor. This, in turn, has created attractive opportunities for pubs and bars to sell innovative products.

By distribution channel, the market has been divided into on-trade and off-trade & direct selling. The on-trade segment held more than 65.0% of the overall market revenue in 2016. The segment includes bars, coffee shops, hotels, and restaurants. The product distribution in the country through on-trade channels is anticipated to register higher growth over the coming years. 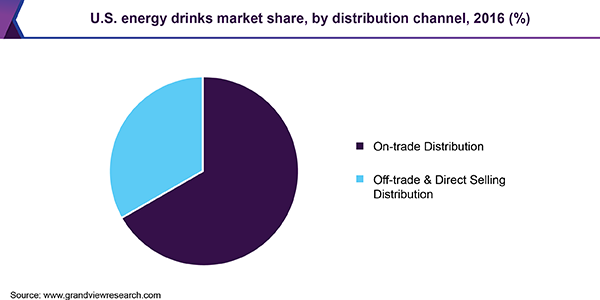 The off-trade sector is estimated to witness sluggish growth over the forecast period owing to shifting consumer preference towards direct selling and stringent norms regarding collaborations with supermarkets and other retail outlets. The segment is predominantly characterized by free in-store sampling and bulk discounts requiring additional investments for advertisements and promotions.

The industry is exceptionally aggressive with organizations undertaking a few activities including regular mergers, capital extension, and strategic alliances. Established players are concentrating on expanding their share in the global arena alongside productivity through technological innovation. Organizations are concentrating on ideal business development by actualizing different development techniques. They are framing strategic alliances with strong players of the specific province and sharing innovative expertise for industrial sectors.

Companies are moving towards organic raw materials, which include components such as extracts from guarana, coffee seeds, pomegranate juice, and ginseng. Some companies have switched to more organic forms of sugars such as fructose and sucrose to avoid excessive calories present in sugar and make it a much healthier option.

Amway acquired the XS energy brand that was co-founded by former Amway business owners. The acquisition was made to strengthen opportunities for aspiring business people and for attracting the youth segment. Monster Energy acquired brands such as Burn, NOS, Full throttle, Mutant, Mother, and Relentless. This has helped the company to become the second-largest player in the market. Some of the key companies present in the market are Red Bull GmbH, Monster Energy, and Rockstar.

This report forecasts revenue growth at the country level and provides an analysis of industry trends in each of the sub-segments from 2014 to 2025. For this study, Grand View Research has segmented the U.S. energy drinks market report based on the product, target consumer, and distribution channel: