The U.S. industrial ethanol market size was estimated at USD 30.20 billion in 2017. It is projected to expand at a CAGR of 4.9% from 2017 to 2025. The growth is primarily driven by increasing demand from various application industries such as food and beverage, electronics, and cosmetics, and personal care.

In addition, burgeoning alcoholic and non-alcoholic beverage industries are likely to drive the demand for industrial ethanol over the forecast period. Stringent regulations over greenhouse gas emissions are also anticipated to play a crucial role in driving the demand for the product in the country. 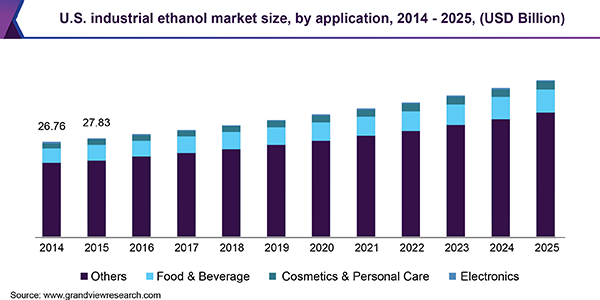 In terms of revenue, the industrial ethanol market in the U.S. was valued at USD 28.97 billion in 2016. In the U.S., the demand is driven by increasing applications of the product for manufacturing fuel, food, alcoholic and non-alcoholic beverages, pharmaceutical, cosmetics, and others.

The country has produced ethanol at record levels and experienced an increase in domestic and export demand accompanied by the construction of new production facilities. By the end of 2017, the country had about 465 million gallons of capacity either under expansion or construction. However, volatile feedstock prices and regulatory and trade environment are continuing to challenge the market growth and profitability.

In terms of revenue, the U.S. industrial grade ethanol market was valued at USD 6.50 billion in 2016 and is anticipated to augment at a CAGR of 3.2% over the forecast period. Several grades of ethanol are widely used in various industrial applications and they differ in terms of the amount of impurities present. Commercial products are used for flavoring food products, alcoholic and non-alcoholic beverages, cosmetics and personal care, pharmaceuticals, printing inks, chemical intermediates for polymers, and paints and coatings.

The other segment includes fuel-grade ethanol, which is by far the largest grade used in the country. The significant consumption of fuel grade products is primarily driven by continuous technological developments, the presence of major market players, and stringent regulations over greenhouse gas emissions. The U.S. ethanol industry has evolved as a global leader in terms of production and trade of renewable fuel.

By source, agriculture was the largest segment in 2016, accounting for a revenue share of 92.70% in the U.S. market. Agriculture ethanol is made from sugar and starch crops such as sugar cane, sugar beet, corn, maize, wheat, rye, and potatoes. Unlike the synthetic variant, agriculture ethanol can be used in all industrial applications as far as consumer safety, comfort, and convenience are concerned. Nearly all the agriculture ethanol in the world is produced from starch and sugar-based feedstock.

Synthetic-based product is primarily produced by the catalytic hydration of ethylene. Ethene is produced by cracking of oil. It is converted to ethanol via a catalyst and steam. In terms of revenue, synthetic segment was valued at USD 1.90 billion in 2016 and is anticipated to augment at a CAGR of 2.6% over the forecast period.

Since ethanol is derived from grains and is pure in nature, it is used as the main ingredient in the processed food industry, owing to the rising demand for organic foods. Ethyl alcohol is used as a processing aid in food industry. Ethanol is extensively used as a natural product to extract and concentrate flavors and aromas, which are then used by food and drink industry. 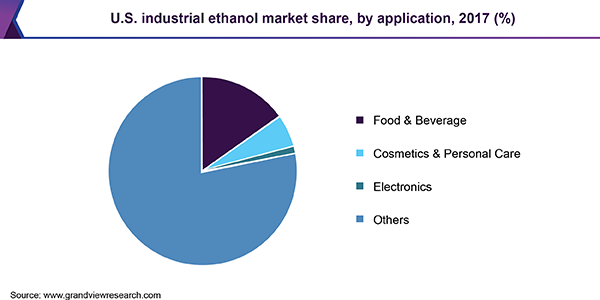 In terms of revenue, food and beverage segment accounted for USD 4.40 billion in 2016 and is anticipated to expand at a CAGR of 4.6% over the forecast period.Ethanol is also widely used in various cosmetics and personal care products such as perfumes, deodorants, hairsprays, and other related products. It is used in a broad range of products where there is direct exposure to the human skin as ethanol is made from the fermentation of sugars of corn, sugarcane, or wheat.

Fluctuating raw material prices are challenging the growth and profitability of the market in U.S. Owing to the fluctuating prices and volatility in the sugarcane industry, white sugar manufacturers utilize molasses, which is an end product of sugar refining to manufacture ethanol. The manufacturers of distinct products such as food ingredients, pharmaceuticals, and fossil fuel are horizontally integrating their operations in the value chain, which, in turn, is further intensifying the competition in the market.

This report forecasts revenue and volume growth at country levels and provides an analysis of the latest industry trends in each of the sub-segments from 2014 to 2025. For the purpose of this study, Grand View Research has segmented the U.S. industrial ethanol market report on the basis of grade, source, and application: