The U.S. minor cannabinoids market size was valued at USD 4.9 billion in 2020 and is expected to expand at a compound annual growth rate (CAGR) of 20.1% from 2021 to 2028. The rising trend of adopting cannabinoid-based medicines over traditional medicines, owing to their affirmative health benefits for many health conditions such as chronic pain, cancer, arthritis, neurological disorders, and metabolic disorders is a key factor supporting the market growth. The rising acceptance of cannabis-based medications by consumers as well as medical practitioners is further bolstering the growth. 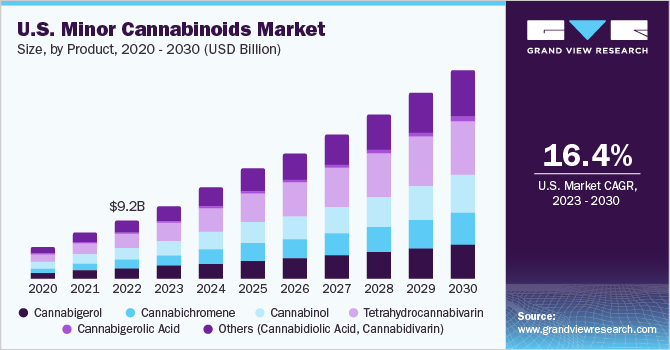 The approval of the Farm Bill in 2018 has led to an increase in the awareness and adoption of cannabis-related products in the country. It has also created numerous opportunities, thereby proving to be beneficial in increasing the research and funding for cannabis and its derivatives. Furthermore, in recent years, minor cannabinoids have gained impetus and positive research regarding the health benefits of minor cannabinoids, which is anticipated to boost market growth. For instance, there are various ongoing trials for analyzing the effect of minor cannabinoids on conditions such as diabetes, alopecia, epidermolysis bullosa, pain management, and arthritis.

In addition, the growing adoption of cannabinoids by healthcare professionals for various medical conditions is one of the key factors supporting the market growth. Prescription of cannabinoid-based products by healthcare personnel develops a positive influence on the minds of patients or consumers, thereby increasing the adoption and gaining popularity. For instance, according to an article published by Innovation Shares in January 2020, the Google Search Index for health benefits provided by CBG increased from 60 in January 2019 to around 95 in January 2020. It signifies rising popularity for CBG among consumers. Such instances are likely to promote market growth.

Moreover, the expensive extraction and purification process is one of the factors impeding the growth of the market. Minor or rare cannabinoids are found in very few quantities in the cannabis plants, and hence they are hard to extract and purify, thereby reducing the number of players opting for rare cannabinoid production. For instance, CBG accounts for around 1% of the total cannabis plant as compared to CBD, which accounts for around 20%. It signifies that for extraction of the same quantity of CBG as that of CBD, it will require around 20x amount of biomass. This expensive extraction and purification procedure thus hamper the growth of the market.

Despite the costly purification process due to the increasing popularity of rare or minor cannabinoids and rising adoption, many players have started their production. For instance, GVB Biopharma, LaurelCrest, Bulkanna, Extract Labs, and Fresh Bros Hemp Company are some of the players providing CBN isolates. In addition, companies are further gaining impetus in the research and product development of rare cannabinoids for specific medical conditions. For instance, InMed Pharmaceuticals, Inc. is one of the major companies to initiate a clinical trial for Cannabinol (CBN) as a potential therapeutic compound to treat diseases with unmet medical needs.

In addition, the COVID-19 pandemic has drastically impacted the global as well as the U.S. legal cannabis market. It has further impacted the minor cannabinoids market of the country. Supply chain disruptions and nationwide lockdown during the peak months of the COVID-19 pandemic have led to a decrease in revenue generation for the market. In addition, in the initial pandemic months, the panic-buying caused by consumers for cannabinoid-based products has further led to product shortages, thereby hindering the market growth. However, with the situation in the country as well as the global level heading toward normalcy, the market is anticipated to witness a higher growth rate in the forthcoming years.

Based on product type, tetrahydrocannabivarin (THCV) dominated the market with a revenue share of 24.8% in 2020. This high share is attributable to the rising adoption of THCV for various applications such as epilepsy, arthritis, metabolic disorders, neurological disorders, diabetes, Alzheimer’s disease, and pain management. In addition, rising strategic initiatives in the form of product launch, clinical trials, and production of cultivars with high THCV content by key players are contributing to further increasing the adoption and penetration of THCV products. Many players are aiming toward cultivating high THCV cultivars due to the antagonistic effects provided by THCV as compared to THC. Such initiatives signify growing demand, and this is anticipated to boost the market growth.

In addition, cannabigerolic acid (CBGA) is anticipated to expand at the fastest CAGR of 21.6% during the forecast period. This growth is attributable to increasing awareness regarding the benefits of CBGA for certain medical conditions such as cancer, metabolic disorders, diabetes, and cardiovascular diseases. Furthermore, the rising number of players aiming toward the production of CBGA is expected to fuel the growth.

Based on the application, the others application segment held the highest revenue share of 36.6% in 2020. Some of the health conditions in the other segments are cardiovascular diseases, arthritis, metabolic disorders, diabetes, dermatological conditions, and glaucoma. This high share can be attributed to the rising usage of minor cannabinoids for such conditions and the rising research for signifying the benefits of these cannabinoids in improving health. In addition, many healthcare institutions are initiating or have already initiated researches for analyzing the health benefits of rare cannabinoids. For instance, in 2020, the University of Utah accomplished research about cannabinol (CBN). 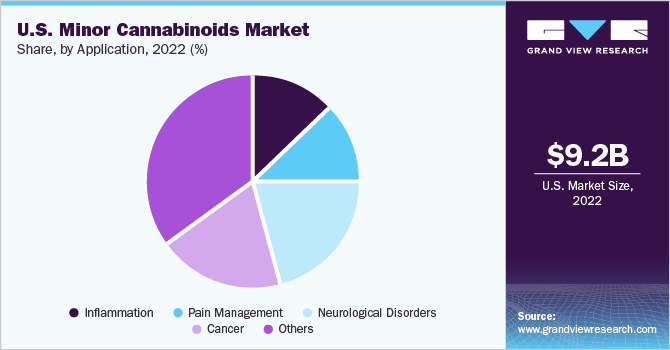 The competition is moderate among the existing market players due to the expensive extraction process for minor cannabinoids. However, rising consumer preference for these cannabinoids is anticipated to boost the competition in the forthcoming years. Some of the key players operating in the market are Mile High Labs International, Global Cannabinoids, GenCanna, CBD INC, Precision Plant Molecules, Rhizo Sciences, LaurelCrest, Fresh Bros Hemp Company, BulKanna, High Purity Natural Products, and Zero Point Extraction.

Furthermore, strategic alliances with other market players in the form of mergers & acquisitions product launches, production scale-up, and partnerships, as well as increasing R&D in the field of minor cannabinoids are some of the initiatives being undertaken by key market players. For instance, in 2020, Mile High Labs International announced its exclusive agreement with Herbalife Nutrition for providing hemp extract for topical skincare products with cannabinoids. Some of the prominent players operating in the U.S. minor cannabinoids market include:

This report forecasts revenue growth at the country level and provides an analysis of the latest industry trends in each of the sub-segments from 2014 to 2028. For this study, Grand View Research, Inc. has segmented the U.S. minor cannabinoids market report based on product and application:

How big is the U.S. Minor Cannabinoids market?

What is the U.S. Minor Cannabinoids market growth?

b. Tetrahydrocannabivarin (THCV) dominated the U.S. Minor Cannabinoids market with a share of 24.8% in 2020. This is attributable to rising adoption of THCV for various applications such as epilepsy, arthritis, metabolic disorders, neurological disorders, diabetes Alzheimerâ€™s disease and pain management.

Who are the key players in U.S. Minor Cannabinoids market?

What are the factors driving the U.S. Minor Cannabinoids market?

b. Key factors that are driving the U.S. Minor Cannabinoids market growth include rising acceptance by consumers as well as medical practitioners toward cannabis-based medications and shift in trend of adoption from traditional medications toward cannabinoid-based medicines owing to affirmative health benefits provided by them.