The U.S. onshore drilling fluids market size was valued at USD 1,006.9 million in 2016. Growing demand for crude oil and gas in industrial sectors such as power and transport sectors is expected to drive the oil & gas production in the region. Growing concerns toward collapsing boreholes, spill containment, and handling solid wastes are expected to drive drilling mud demand over the forecast period.

Increasing petroleum E&P activities in the U.S. have been a major factor towards increased drilling mud requirement over the past few years. There has been increasing production in the associated oil & gas reserves of other oil fields of the U.S. Most of the reservoirs have several rock strata, which require different types of mud systems. Additionally, boring activities in shale or tight reserves require frequent change of additives, which is estimated to boost sales over the forecast period.

Growing concern toward environmental impact associated with the dumping of waste mud systems has urged regulatory bodies in various states of the U.S. to issue stringent guidelines regarding treatment and disposal of used additives. The U.S. EPA has laid protocols regarding the discharge of waste OBF and WBF in its basins. Canadian Association of Petroleum Producers and National Oceanic and Atmospheric Administration have issued stringent guidelines for disposal of waste mud systems in North America.

Oil & gas has dominated as a major source of primary energy over the past few years. Although coal is expected to lose its share by 2025, it is anticipated to account for over 75% of total energy supply along with oil & gas. This can be majorly attributed to the growing consumption in the form of feedstock in petrochemicals.

Boring fluid technology is constantly evolving owing to emerging need to operate under severe conditions such as high temperature & pressure environment in shale gas and tight gas reservoirs. Rising technical demands including increased lubricity requirements in air boring and increasing restrictions on oil-based systems (OBF), such as environmental remediation, are anticipated to raise R&D in this field.

A major challenge in the drilling mud industry is to meet the rising demand for solutions that can increase production rates in conditions such as high temperature and pressure in onshore horizontal and directional wells. The components of mud systems need to be selected so that discharge of cuttings and mud has the least environmental impact over the long term.

Water-based fluids (WBF) emerged as the leading product segment and accounted for over 50% of the total revenue in 2016. Its base consists of fresh water, brine, saturated, or formate brine. The selection of media depends on good conditions such as terrain, soil permeability, formation, proximity to the aquifer, and drive mechanisms. Growing concern toward the environmental impact of waste generated in oil & gas operations is anticipated to raise the demand for WBF over the forecast period. Rising product demand may be attributed to the low toxicity of these products. 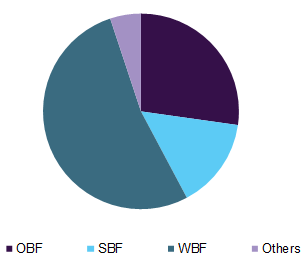 Shale stabilizers and alkalinity & pH control agents are the major components in the WBM. Adverse environmental effects of OBF coupled with strict government regulations toward the wastage created in the process are anticipated to hinder the market growth. Development of advance boring fluid chemicals, particularly for wells where horizontal boring is required is anticipated to create immense opportunities for the onshore drilling fluids market.

OBF lies on a moderate penetration-low growth rate side. This particular segment is anticipated to witness stagnant growth on account of adverse environmental impact associated with waste discharge. Synthetic-based fluids (SBF) are anticipated to witness moderate growth over the forecast period on account of their ability to provide excellent borehole control, thermal stability, lubricity, and penetration rates, which are beneficial in reducing the overall cost.

Permian basin is anticipated to emerge as the fastest-growing regional market in the U.S. with a CAGR of 3.4% from over the next eight years. WBF and OBF lubricate the tools and reduce corrosion in reactive formations. Growing concern towards oily drilled cuttings and sampling coupled with environmental impacts associated with waste discharge is expected to drive product demand over the forecast period.

Many companies are planning to invest in Niobrara operations owing to the lower involvement of companies in the surface of the Niobrara and hydrocarbon-rich shales in the Rockies. For example, ConocoPhillips announced that the company is expected to target a rig to operate in the Niobrara in 2017.

Several companies are working to expose the resources trapped in Niobrara and five major companies stand out as those poised to dominate the Basin. Anadarko Petroleum, one of the five key competitors, has targeted the DJ Basin (Wattenberg Field) and accounted for the production of 356,000 BOE/d and 350,000 of net acres’ surface of Niobrara. The other leading Niobrara shale producers include Noble Energy, Devon Energy, EOG Resources, and Whiting Petroleum.

Drilling mud manufacturers have been adopting various strategies such as new product development, partnerships, agreements, collaborations, and joint ventures. These strategies have been adopted to increase market penetration and cater to changing technological requirements for different end-use sectors in the region. WBF has been extensively used in the oil & gas industry owing to low costs and less environmental impact.

The major players operating in the U.S. drilling mud industry comprise some of the integrated oilfield service provider companies such as Schlumberger, Halliburton, and Baker Hughes. Some of the other prominent players in the U.S. include Hamilton Technologies, Anchor Drilling Fluids, Francis Drilling Fluids, and National Oilwell Varco.

This report forecasts revenue growth at global, regional & country levels and provides an analysis of the industry trends in each of the sub-segments from 2014 to 2025. For this study, Grand View Research has segmented the U.S. onshore drilling fluids market based on product and region: