The U.S. residential solar PV market size was estimated at USD 9.1 billion in 2020 and is expected to expand at a compound annual growth rate (CAGR) of 5.6% from 2021 to 2028. The market is driven by the presence of favorable policies and regulations for net metering and financial incentives such as Investment Tax Credit (ITC) in the U.S. 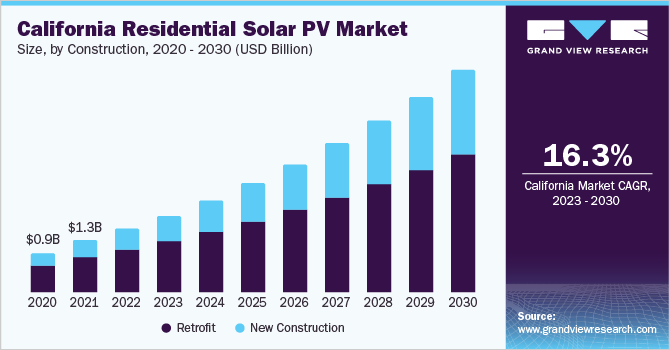 Decrease in solar PV (photovoltaic) installation costs in the last decade has resulted in high growth of solar PV in the U.S. Further, the presence of easy solar financing options provides a number of options for residential end-users to choose from, which has propelled the growth of the market.

The rise in environmental concerns regarding the increase in carbon emissions owing to the usage of conventional fuels for transportation and power generation purposes has prompted countries around the world to opt for cleaner and efficient sources of power. Furthermore, the long-term power generation goals of North American countries such as the U.S., Canada, and Mexico have given impetus to the growth of clean energy technologies.

The government of Mexico has also set up an ambitious goal to reduce carbon emissions by targeting to obtain 35% of power generation from clean energy sources by 2035 and expand it to 50% by 2050. The Mexican government is emphasizing the deployment of residential solar PV in the country. For instance, Mexico had an installed capacity of 173 MW in 2015, which has increased to 4,426 MW in 2019 owing to favorable policies and regulations in the country.

Increasing demand for renewable-based clean power generation, coupled with supportive government policies, incentives, and tax rebates to install residential solar PV systems, is projected to boost the market in the region in the upcoming years. Firms in the industrial and utility sectors are among the prime consumers of solar PV in the region due to their large-scale green power requirements. The residential and commercial segments have been gaining momentum owing to the availability of net metering schemes for grid-connected systems and the availability of options to integrate battery storage systems for off-grid connected systems.

The retrofit construction segment dominated the market and accounted for the largest revenue share of 72.6% in 2020. This high share is attributable to rising environmental concerns that have prompted regulatory authorities to draft supporting policies and plans for residential solar PV in the country.

The regulatory authorities emphasize the potential of solar PV installation in residential buildings. These factors have resulted in the introduction of supporting policies and plans from regulators for residential solar PV systems in the U.S. For instance, the solar Investment Tax Credit (ITC), enacted in 2006, has been one of the major policy tools driving solar PV installation in the U.S.

Currently, ITC provides a 26.0% tax credit for the installation of solar systems on residential properties under Section 25D. A tax credit under the provision of the scheme provides a dollar-for-dollar decrease in the income tax that a person would have otherwise paid to the federal government. This has provided a thrust for residential end-users to opt for solar PV systems to get tax incentives. However, the government is planning to limit ITC at 22% for the residential sector by 2023, and remove ITC for the residential sector from 2024 onward, which is expected to hinder the growth of the market in the retrofit segment.

California dominated the U.S. residential solar PV market and accounted for the largest revenue share of 33.3% in 2020. It has the largest solar market in the U.S. owing to the various economic and environmental benefits including several local investments to increase the residential solar PV installations in the state. Currently, more than 20% of the state’s power generation comes from solar energy. 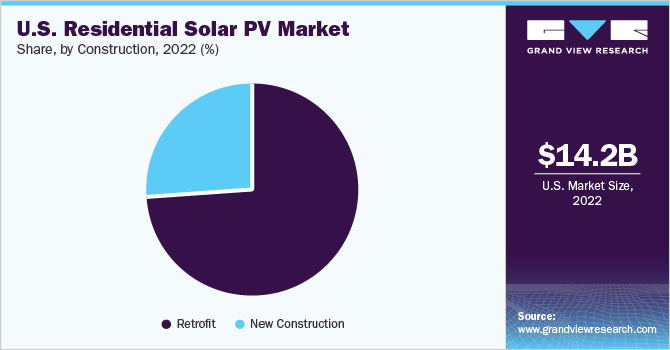 The presence of favorable policies and regulations such as net metering for solar PV in the state has been a major reason for its dominance in the market. Further, the presence of various incentives for residential end-users for the installation of solar PV systems has provided a boost to the market in the state.

New York has a substantial solar energy potential and has constantly been in the top ten states of the U.S. solar PV market. The state has numerous policies in place to promote investments in solar energy that includes net metering and a feed-in tariff through Long Island Power Authority. Through its ‘Reforming the Energy Vision’ docket, the Energy Commission is revising the regulations and providing an environment needed to boost a more effective power system, that includes large deployment of distributed generation energy.

In October 2020, Sunrun announced that it acquired Vivint Solar. With this acquisition, the company became the leader of home solar and energy services provided across the U.S.In January 2021, SPI Energy announced SolarJuice American, Inc. and Petersen Dean Inc. had entered into a court-approved comprehensive interim management agreement that will allow both the companies to prepare for the sale of Petersen Dean Inc.’s assets to Solarjuice American Inc. Some of the prominent players in the U.S. residential solar PV market include:

This report forecasts revenue and volume growth at country level and provides an analysis of the latest industry trends in each of the sub-segments from 2016 to 2028. For the purpose of this study, Grand View Research has segmented the U.S. residential solar PV market report on the basis of construction and state:

How big is the U.S. residential solar PV market?

What is the U.S. residential solar PV market growth?

b. The retrofit segment dominated the U.S. residential solar PV market with a share of 72.5% in 2020. This is attributable to rising environmental concerns that have prompted regulatory authorities to draft supporting policies and plans for solar PV.

Who are the key players in U.S. residential solar PV market?

What are the factors driving the U.S. residential solar PV market?