The U.S. small hydropower market size was valued at USD 307.96 million in 2020 and is projected to expand at a compound annual growth rate (CAGR) of 1.8% from 2021 to 2028. Increasing demand for renewable energy in the U.S. is expected to drive the market over the forecast period. The rising need to modernize small hydropower projects to promote power generation and extend the life of assets to cope with the ever-increasing demand for electricity is anticipated to fuel the market growth. Increasing greenhouse emissions due to the growing power consumption have prompted the United Nations Industrial Development Organization (UNIDO) and Federal Energy Regulatory Commission (FERC) to adopt certain renewable energy measures. 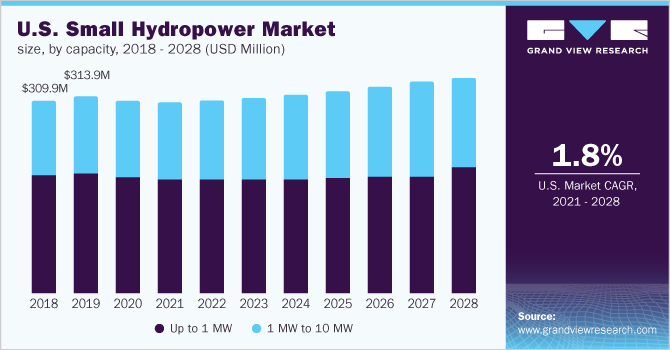 Furthermore, policies by the Federal Energy Regulatory Commission to encourage renewable sources of energy, coupled with the need to deliver energy in rural locations, are some favorable factors that are likely to lead to the growth of the market. Increasing concerns regarding climate change coupled with the dependency of the U.S. on foreign oil have emerged as the key drivers for the industry. The use of conventional sources of energy, such as various fossil fuels, is a major cause of the rising emission of Greenhouse Gases (GHG), which are believed to be a key contributor to global warming.

Small Hydropower (SHP) generation plants use moving water to produce electricity. These plants are mainly installed on the existing water supply networks or small streams and rivers. Small hydropower plants can be operated with negligible impact on the environment. Supportive regulatory framework for supportable energy in the United States is likely to have a positive influence on market demand. Execution of favorable government regulations, such as the Hydropower Regulatory Efficiency Act and Rural Jobs in the United States, along with an increasing number of funding programs related to the renewable energy sector are some of the factors, which are projected to present future growth prospects.

In terms of revenue, up to 1 MW capacity segment dominated the overall market with a revenue share of more than 60% in 2020. Up to 1 MW-capacity hydropower systems provide an almost 70% capacity execution rate. They are set up in geographical areas having flowing water through great mountain ranges and their foothills. They are either used as stand-alone systems or, more often, as systems feeding into the grid.

The hydropower system of 100 kW capacity is used to power the rural industries, small communities, or remote areas away from the grid. The 1 MW to 10 MW capacity hydropower plant is ideally used to generate power fed into the main grid. The negative environmental impact and cost saving offered in distribution & running costs provided by the small hydropower plants is expected to result in positive market growth for the segment over the forecast period. 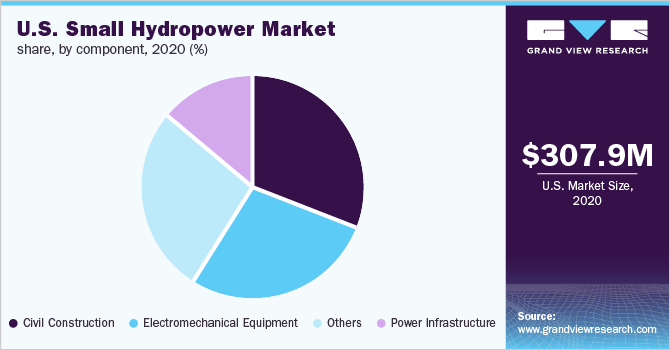 Major small hydropower plants have a trash rack cleaning machine, which removes material from water and prevents it from entering the plant waterways and damaging the electromechanical equipment or reducing hydraulic performance. The others segment includes structural, engineering, project development, environmental mitigation, and management.

Major component suppliers for turbines are ANDRITZ and Gilkes. The key generator suppliers include Siemens Energy and Voith GmbH & Co. KGaA and the leading penstock providers are Canyon Hydro and ANDRITZ. The equipment is supplied to manufacturers, who assemble and partially develop some systems used in small hydropower plants. Some of the prominent players in the U.S. small hydropower market include:

This report forecasts revenue growth at a country leveland provides an analysis of the latest industry trends in each of the sub-segments from 2017 to 2028. For the purpose of this study, Grand View Research has segmented the U.S. small hydropower market report on the basis of construction capacity, component, and type:

How big is the U.S. Small Hydropower market?

What is the U.S. Small Hydropower market growth?

b. Incapacity segmentation, up to 1 MW dominated the market with a share of 60.02% in 2020. They are set up in geographical areas having flowing water through great mountain ranges and the U.S. on foreign their foothills.

Who are the key players in U.S. Small Hydropower market?

What are the factors driving the U.S. Small Hydropower market?

b. The key factors driving the growth of the U.S. Small Hydropower Market include favorable government policies towards the generation of renewable electricity and increasing concerns regarding climate change coupled with the dependency of the U.S. on foreign oil.