The global vegan sauces, dressings and spreads market size was valued at USD 194.6 million in 2019 and is expected to grow at a compound annual growth rate (CAGR) of 8.2% from 2020 to 2027. Growing importance of vegetarian diet among the consumers as a result of increased awareness regarding cruelty-free products in developed economies, including Germany, U.K., and France, is expected to have a positive impact on the market growth. 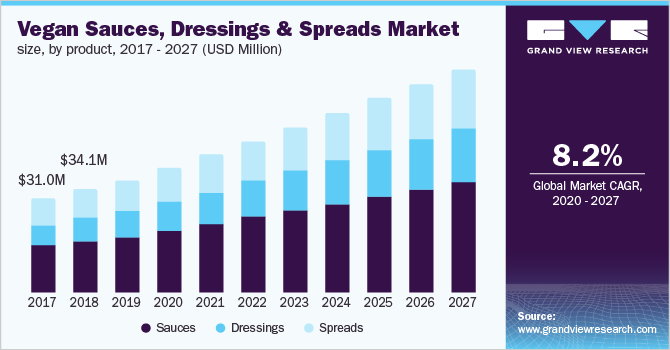 According to the data published by the Food Allergy Research & Education (FARE), in 2019, 32 million Americans suffered from food allergies in U.S. This study revealed that majority of food allergies come from eggs, fish, and shellfish. As a result, increased prevalence of food allergies is expected to expand the scope of vegan sauces, dressings and spreads over the next few years.

Major manufacturers have been leveraging the opportunity by launching new products. For instance, in February 2020, Saclà Italia, an Italian pesto and pasta sauce brand, launched a new line of vegan dressings. The company introduced six different flavors of vegan sauces in the U.K. market.

Shifting inclination towards vegan and vegetarian diet among millennials is expected to expand the industry size in the HoReCa (Hotel/Restaurant/Café) sector. For instance, in 2017, Saudi Arabian prince Al-Waleed bin Talal has announced plans to open vegan restaurants across the region for promoting the healthy lifestyle. Increasing health concerns have also made consumers shift their preference to the vegan food regime.

Vegan sauces accounted for the largest share of over 45.0% in 2019. The segment includes vegan fish sauce, alfredo sauce, mayonnaise, vodka sauce, pesto, and Worcestershire sauce. Increasing use of sauces to add flavor, moisture, and visual appeal to a dish has been playing a crucial role in driving the segment. Increasing dependence on premade and packaged sauces has also been acting as a crucial factor in promoting the popularity of sauces.

Vegan dressings are expected to register the fastest CAGR of 8.8% from 2020 to 2027. These include homestyle ranch, Hon’y Mustard, creamy Italian, creamy Caesar, blue cheese, and habanero. The growth of the dressings segment is attributed to the popularity and adoption of salads in everyday meals across the globe.

Offline distribution channel accounted for the largest share of more than 80.0% in 2019. This channel includes a large variety of small manufacturers supplying their products locally. Preference for these can be found among customers when the choice of sauce, dressing, dip or spread is inspired from the regional cuisine. Furthermore, these products are preferred as some of the manufacturers try to keep it all organic and refrain from adding preservatives. 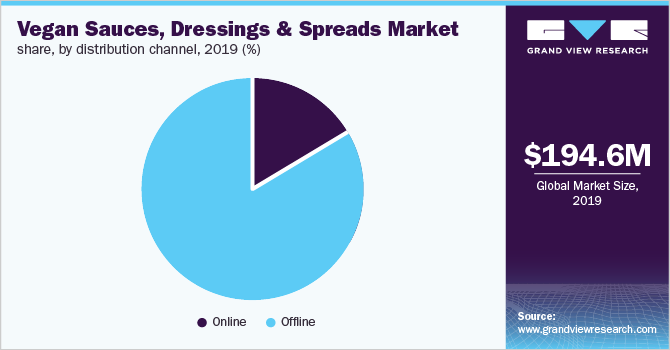 Online distribution channel is expected to register the fastest CAGR of 9.3% from 2020 to 2027. Most major manufacturers have created their own online distribution channel, wherein these sauces, dressing, dips, and spreads can be easily ordered from their official websites. People prefer ordering online as it offers them the convenience as well as a large variety to select from. Additionally, such channels provide various add-on benefits, including cash-on delivery, coupon benefits, and cash-back offers.

Europe accounted for the largest share of over 40.0% in 2019. This is attributed to increasing adoption of veganism as a lifestyle in majority of the countries, including Germany, U.K, France, Spain, and Italy. Furthermore, rising awareness pertaining to the environmental, ethical, and health impact of diet is projected to expand the scope of different varieties of vegan sauces, dressings and spreads in the near future.

North America is expected to register the fastest CAGR of 9.2% from 2020 to 2027. A large number of people in U.S. and Canada have been adopting vegan lifestyle on account of increased prevalence of food allergies and lactose intolerance among the population. This is expected to expand the scope of vegan sauces, dressings and spreads over the next few years.

Increasing number of manufacturers have been entering into the market for vegan sauces, dressings and spreads to leverage the ever-expanding opportunity. For instance, in March 2020, Michelin chefs Gavin Cassidy and Eoin Lennon started the company Porter & Nash. The initial investment of EUR 55,000 was made for building the company. The company offers kombu seaweed based vegan sauces. The sauce is gluten-free, fat-free, and is low in salt and sugar. Some of the prominent players in the vegan sauces, dressings and spreads market include:

This report forecasts revenue growth at the global, regional, and country levels and provides an analysis on the latest industry trends and opportunities in each of the sub-segment from 2016 to 2027. For the purpose of this study, Grand View Research has segmented the global vegan sauces, dressings and spreads market report on the basis of product, distribution channel, and region: