The global Augmented Reality & Virtual Reality in healthcare market size was valued at USD 2.0 billion in 2020 and is expected to expand at a compound annual growth rate (CAGR) of 27.2% from 2021 to 2028. Technological advancements and digitalization in healthcare, favorable government initiatives, rising healthcare expenditure, growing usage in surgical procedures, and medical training are some of the fundamental factors anticipated to boost the growth and adoption of the augmented reality (AR) and virtual reality (VR) technologies in the healthcare industry. These technologies have wide applications in healthcare including surgeries, diagnostics, rehabilitation, training, and education. 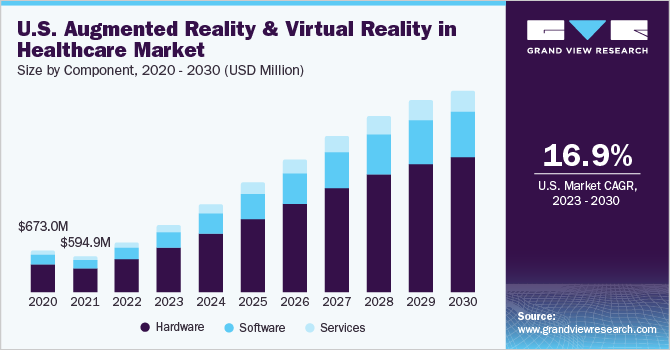 Augmented and virtual reality techniques are being increasingly adopted in surgeries and diagnostics. Systems such as touch surgery use virtual reality to provide a view of the patient’s anatomy and physiology, thereby providing opportunities for surgeons in the operating room, This, in turn, is expected to augment the growth of the market for augmented reality and virtual reality in healthcare. The growing adoption of Augmented Reality (AR) and Virtual Reality (VR) technologies in medical surgeries to optimize surgical procedures and increase the efficiency of treatment is one of the key factors driving market growth over the past few years. For instance, in December 2019, Augmedics launched the Xvision Spine AR guidance system for spine surgeries in the U.S. This solution allows the surgeon to view the 3D spinal anatomy of the patient during the surgery. Augmedics also received the U.S. FDA approval for Xvision in December 2019. Moreover, the increasing practice of storing medical images and patient data on the AR/VR platform helps in reducing requirements for expensive screens and unnecessary staff.

Additionally, AR is being widely adopted for education and training purposes for medical personnel. Since AR-based learning modules provide anatomical visualization and simulation it gives the medical personnel a more wholesome complete learning experience. Moreover, these learning modules are even being used to train patients and helps them understand the treatment flow and care management better. AR-based image visualization assists the surgeons and enhancing their accuracy and precision during complex surgeries. For instance, in February 2019 Philips Healthcare collaborated with Azurion and Microsoft to develop a mixed reality concept to provide a 3D holographic AR environment derived from multiple image modalities to assist surgeons.

During the outbreak of the COVID-19 pandemic, AR & VR in healthcare was influenced positively owing to the technological advancements in this space. For instance, in April 2020 XRHealth extended its application by raising USD 7 million to expand its telehealth platform. Similarly, Imperial College and St. Mary’s Hospital in London are using augmented reality glasses to visualize 3D imaging of blood vessels during reconstructive surgeries. Augmented reality and virtual reality in healthcare help in efficiently managing the treatment schedules, treatment delivery, and plans, and thereby it is anticipated to exponentially grow during the pandemic. Additionally, the decreasing costs in healthcare, rapid digitalization of healthcare, and improved delivery of effective health services are expected to drive growth. AR and VR in healthcare are gaining momentum due to widespread adoption in telemedicine, medical training & education, patient care management, medical marketing during the COVID-19 pandemic.

Furthermore, mergers and acquisitions, product development and launches, partnerships, and collaborative agreements are some of the crucial initiatives being undertaken by key players, which are expected to propel market growth. For instance, in January 2021 Hologic Inc acquired Biotheranostics, a molecular diagnostics company for USD 230 million. Through this acquisition, Hologic Inc and Biotheranostics will combine their capabilities and utilize their expertise in oncology diagnostics and advanced woman health diagnostics.

In 2020, the hardware segment dominated the market for augmented reality and virtual reality in healthcare and accounted for the largest revenue share of 67.6%. Devices such as head-mounted displays, smart glasses, and 3D sensors hold significant shares in the market for AR & VR in healthcare. Head-mounted devices and smart glasses are widely used in training and simulation, surgeries, diagnostics, telementoring, and many applications. In the current market scenario, AR/VR hardware has a huge commercialized product base with a high rate of adoption, especially in developed countries, which can be accounted for its largest market share in 2020. Moreover, usage of single hardware in multiple applications is also one of the pivotal factors, which is expected to boost its usage and affect the market for AR and VR in healthcare.

However, the software segment is expected to grow fast over the forecast period owing to recent technological advancements in in-app designing including apps such as EyeDecide. It detects eye conditions by measuring various parameters. In addition, apps such as Applied VR help the patient overcome anxiety during any surgical procedure. In recent years, there has been a huge development in interconnectivity and network services that help patients gain access to these platforms.

Augmented reality technology is increasingly being used in various fields of medical sciences such as surgical preparation and minimally invasive surgery. Technological advancements and rising demand for reducing the complexity of medical procedures are resulting in increased adoption of augmented reality technology. Market players operating in AR technology are entering into partnerships with domestic players to expand their product reach and launch new products. For instance, in April 2019, Vuzix, a smart glass, and AR technology expert partnered with VSee, a telemedicine solutions provider to develop smart glass for the telemedicine industry.

However, the VR sector in healthcare is expected to grow as various healthcare IT companies are increasingly investing in this sector due to potential growth opportunities. For instance, in September 2020, OssoVR raised USD 14 million led by Kaiser Permanente. The company plans to utilize the funds for developing VR-based surgical and medical device training modules.

VR has applications in diverse areas such as surgery simulation, robotic surgery, skills training, and phobia treatment. Recent innovations in healthcare IT is a key factor driving the segment. The advantage of the ease in performing and learning surgical procedures that virtual reality offers to medical professionals and trainees is expected to boost the adoption of virtual reality technology in the market. 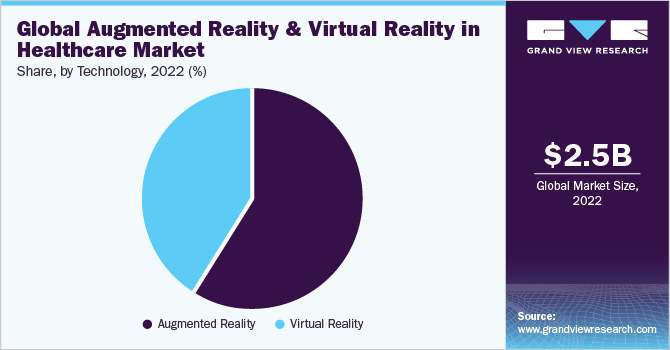 However, the virtual reality segment is expected to witness significant growth during the forecast years. Virtual reality enables the user to interact with a three-dimensional environment and has huge opportunities in rehabilitation and pain management. Virtual Reality exposure therapy is one such process used to treat various phobias such as fear of height, driving, claustrophobia, and posttraumatic stress disorders. Factors such as an increase in the rate of neurological disorders and rising demand for new diagnostic methods are positively driving the growth of the market.

Based on region, North America dominated the augmented reality (AR) and virtual reality (VR) in the healthcare market and accounted for the largest revenue share of 40.7% in 2020. Factors that are driving growth in this region are higher adoption of these technologies, investment in R&D activities, and favorable government initiatives. The National Institute of Health of the U.S. government is offering funds for research in virtual reality with its application in healthcare. Moreover, there is a rise in outsourcing healthcare IT services in North America due to increased pressure by healthcare providers and payers to reduce treatment costs. This factor has positively impacted the growth of the market for augmented reality and virtual reality in healthcare in the region

However, Asia Pacific is expected to be the fastest-growing market over the forecast period owing to increasing awareness among the population and improving healthcare infrastructure. Developing markets such as India, China, Brazil, and Mexico are promising destinations for outsourcing services related to the development and distribution of AR and VR technologies in healthcare. Latin America, Middle East, and Asia Pacific are still at a nascent stage of development in terms of these technologies due to lack of awareness and lower adoption by the population. Countries such as Israel and UAE are witnessing increasing healthcare expenditure and quality of healthcare services, which is further expected to propel market growth in the region over the forecast period.

This report forecasts revenue growth at global, regional, and country levels and provides an analysis of the latest industry trends in each of the sub-segments from 2016 to 2028. For the purpose of this study, Grand View Research, Inc. has segmented the global Augmented Reality & Virtual Reality in healthcare market report on the basis of component, technology, and region:

How big is the augmented reality & virtual reality in healthcare market?

What is the augmented reality & virtual reality in healthcare market growth?

b. The hardware segment dominated the AR and VR in healthcare market with a share of 67.6% in 2020. This is attributable to the growing importance of hardware devices such as desktops, head-mounted displays, and other display devices while using these technologies.

Who are the key players in augmented reality & virtual reality in healthcare market?

What are the factors driving the augmented reality & virtual reality in healthcare market?

b. Key factors driving the AR and VR in healthcare market growth include the growing integration of technology & digitalization in healthcare, increasing healthcare expenditure & focus on the delivery of efficient health services, and its significance in training healthcare professionals worldwide.

b. By technology, the augmented reality segment dominated the market for AR and VR in healthcare and accounted for the largest revenue share of 59.8% in 2020.

b. Based on region, North America dominated the AR and VR in healthcare market and accounted for the largest revenue share of 40.7% in 2020.