The global wireless brain sensors market size was valued at USD 362.2 million in 2019 and is expected to expand at a compound annual growth rate (CAGR) of 9.5% from 2020 to 2027. The increasing adoption of sedentary lifestyles across the globe is one of the major factors driving the market for wireless brain sensors. The unhealthy lifestyle choices such as alcohol addiction and smoking are among the major causes leading to stroke and migraine. According to the NCBI, some of the variables of lifestyle that influence health are: 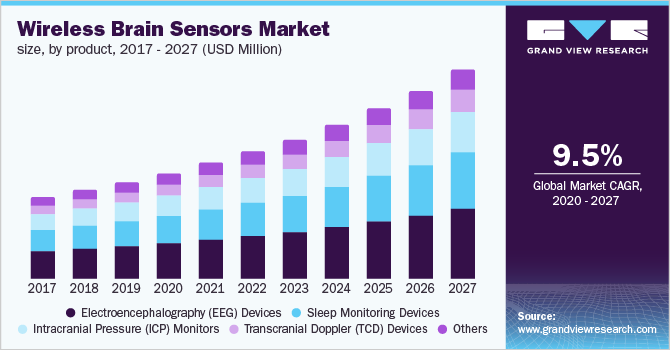 Stroke is the leading cause of mortality and morbidity due to the adoption of an unhealthy lifestyle. In the U.S., around 70,000 people suffer from stroke every year, out of which 23.0% of strokes are fatal or cause permanent disability. In addition, smoking is another major risk factor that causes hemorrhagic and ischemic stroke. Since wireless brain sensors help to manage and prevent such conditions, thus, increasing adoption of unhealthy lifestyle habits is likely to boost the market for wireless brain sensors.

The rising number of cases of Traumatic Brain Injuries (TBI) is also one of the major drivers positively influencing the growth of the market for wireless brain sensors. TBIs, due to a blow, bump, or shock to the skull cause permanent or temporary impairment of the brain. Major causes of TBIs include sports injuries, falls, gunshot wounds, domestic violence, and road traffic accidents. TBI is one of the leading causes of morbidity and mortality, and a major public health concern in developed and developing countries. According to a report published by the CDC in 2020, around 1.5 million Americans suffering from TBI are treated every year. Similarly, as per the journal published by Headway, in 2016-2017, around 348,453 people were hospitalized in the U.K. due to brain injuries.

The rising number of people participating in sports and recreational activities is also expected to increase patient volume suffering from various brain injuries. According to the Stanford Children’s Health, over 3.5 million injuries are reported annually among children and teens in the U.S., and around 21.0% of all injuries are TBIs. Furthermore, according to the Canadian Institute for Health Information, from 2016 to 2017, around 17,655 people were hospitalized due to sports-related injuries. Similarly, according to the American Physical Therapy Association (APTA) 2017 report, approximately 8.6 million sports-related injuries are reported in the U.S. each year. Moreover, about 21.0% of all sports and recreational activities contribute to TBIs among children and adults. This factor is anticipated to drive the demand for wireless brain sensors, thereby propelling the market growth.

In addition, the number of road accidents is rapidly increasing, leading to a rise in the need for wireless brain sensors. According to the Association for Safe International Road Travel (ASIRT) 2018, around 20 to 50 million people are injured or disabled every year, and 1.4 million people die in road accidents. According to the WHO, road traffic injuries are estimated to be the ninth leading cause of mortality globally. ASIRT also reported that in the U.S., more than 38,000 people die in road accidents per year and around 4.4 million are injured or disabled.

According to the Ministry of Road Transport and Highways, Government of India, in 2016, around 494,624 people were injured in road accidents. The number of injured patients from road accidents has increased by 25.6% from 2007 to 2017. In 2016, the states that recorded the highest number of road accidents were Uttar Pradesh (25,096), Tamil Nadu (82,163), Maharashtra (35,884), and Karnataka (54,556). This is anticipated to propel the growth of the market for wireless brain sensors over the forecast period. Moreover, according to the CDC, in the U.S., falls (52.0%) and road accidents (20.0%) are the first and second leading causes of all TBI-related hospitalizations, respectively. Thus, increasing incidences of road accidents and falls are expected to fuel the growth of the market for wireless brain sensors during the forecast period.

The Electroencephalography (EEG) devices segment dominated the market for wireless brain sensors and held the largest revenue share of 33.5% in 2019. The segment is anticipated to witness the fastest growth over the forecast period. The EEG devices allow recording the electrical activity of the brain. The device helps in collecting the electrical activity of the brain. The collected signals are digitalized and amplified and are then sent to mobile or computer for data processing and storage. Individuals can also use this device to improve their wellness and productivity by monitoring their emotions and mood.

The growth of the segment in the market for wireless brain sensors is majorly driven by the rising prevalence of traumatic brain injuries, migraine, and stroke across the globe. For instance, according to the Defense and Veterans Brain Injury Center (DVBIC), around 414,000 TBIs were reported among the U.S. service members between 2000 and late 2019. The majority of these TBIs were classified as mild. On average, about 1,600 TBIs per month occur among the U.S. service members. Thus, the growing incidence of TBIs due to an increasing number of sports injuries, road accidents, and explosive blasts is likely to boost segment growth in the market for wireless brain sensors during the forecast period.

The multispecialty hospitals segment dominated the wireless brain sensors market and held the largest revenue share of 46.0% in 2019. The segment is anticipated to witness the fastest growth rate over the forecast period. The increasing cases of stroke and traumatic brain injuries are the major driving factors for the segment. For instance, according to the Centers for Disease Control and Prevention (CDC), in 2016, there were approximately 2.8 million hospitalizations, emergency department visits, and deaths in the U.S. due to TBI, representing around 2.5 million TBI-related emergency department visits, 288,000 hospitalizations, and 56,800 deaths. Hospitalization rates were the highest among individuals aged 65 and older.

Furthermore, hospitals are currently advancing in terms of technology. Brain examination is a complex process, which requires expensive and advanced equipment that is mainly found only in hospitals. Technologically advanced devices are being used extensively in hospitals to provide better treatment. These devices not only simplify treatment procedures but also provide better, faster, and accurate results. Mostly all neurological diseases and disorders, including severe TBIs, are diagnosed and treated with the help of advanced equipment used by professional neurologists, which are available in specialty hospitals. Hospitals also witness a significantly higher inflow of patients suffering from head injuries, as compared to clinics and other end-users.

The others segment dominated the market for wireless brain sensors and held the largest revenue share of 45.7% in 2019. The others segment majorly includes migraine, stroke, sleep disorders, and Huntington's disease. The increasing cases of migraines and stroke among all age groups across the globe is the major factor promoting the growth of the segment in the market for wireless brain sensors. For instance, as per a report published by the Migraine Research Foundation in 2020, migraine is the third most prevalent illness in the world. It also reported that migraine has affected around 39.0 million people in the U.S. and 1.0 billion people globally. 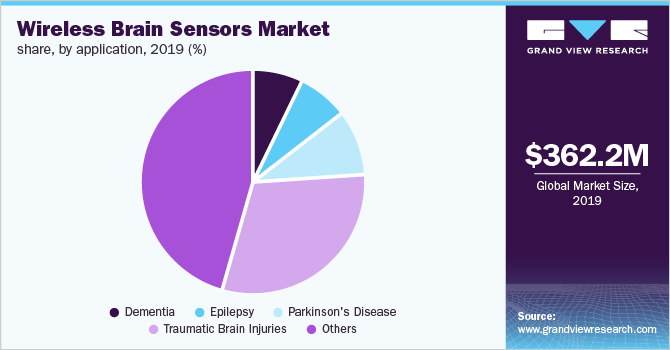 The traumatic brain injuries segment is anticipated to witness the fastest growth rate in the market for wireless brain sensors over the forecast period. The rising awareness regarding TBIs and increasing prevalence of TBIs are the major factors boosting segment growth in the market for wireless brain sensors. For instance, the National Association of State Head Injury Administrators (NASHIA) has started online workshops focusing on issues related to mental health and traumatic brain injuries for the year 2020-2021. NASHIA encourages state governments in developing rehabilitation centers to fulfill the requirements of people with TBIs. Moreover, many national and federal organizations, agencies, and state brain injury institutions organize various events and workshops to spread awareness regarding brain injury, and its treatment options, during the month of March.

North America dominated the market for wireless brain sensors and accounted for the largest revenue share of 45.0% in 2019. The region is expected to witness the fastest growth rate of 10.1% over the forecast period owing to the increase in the prevalence of TBIs, well-established healthcare infrastructure, and favorable reimbursement policies and regulatory reforms in the healthcare sector. According to the Centers for Medicare and Medicaid Services (CMS), the national health spending of the U.S. is expected to grow at a 5.5% rate every year from 2018 to 2027 and is estimated to reach USD 6.0 trillion by 2027. In addition, rapid technological advancements and the presence of major medical devices companies, such as BioDirection, Inc.; BrainScope Company, Inc.; Neural Analytics, Inc.; and Advanced Brain Monitoring Inc., offering TBI assessment and management devices are also among the factors contributing to the growth of the market for wireless brain sensors in the region.

Key companies operating in the market for wireless brain sensors are stressing on research and development to develop technologically advanced products to gain a competitive edge. For instance, in June 2020, EMOTIV launched EPOC X, which is designed for scalable and contextual human brain research, allows access to professional-grade brain data with an improved and easy-to-use design.

In December 2019, Advanced Brain Monitoring Inc. cleared the clinical trials for Stat X-Series mobile EEG systems. This device offers practical and cost-effective solutions for on-call and portable EEG in minutes to healthcare professionals. Thus, this may increase the customer base of the company. Some of the prominent players in the wireless brain sensors market include:

This report forecasts revenue growth at global, regional, and country levels and provides an analysis of the latest industry trends in each of the sub-segments from 2015 to 2027. For the purpose of this study, Grand View Research has segmented the global wireless brain sensors market report on the basis of product, application, end-use, and region:

How big is the wireless brain sensors market?

What is the wireless brain sensors market growth?

b. North America dominated the wireless brain sensors market with the highest share in 2019. This is attributable to rising healthcare awareness coupled with constant research and development initiatives.

Who are the key players in the wireless brain sensors market?

What are the factors driving the wireless brain sensors market?

b. Key factors driving the wireless brain sensors market growth include the increasing prevalence of the brain-related disorder, increasing technological advancements, and high frequency of neurological disorders due to increased stress levels and changes in lifestyle.