The global Huntington’s disease treatment market size was valued at USD 151 million in 2017 and is expected to register a CAGR of 38.2% during the forecast period. Increased uptake of improved symptomatic therapies, promising disease-modifying therapies in the developmental pipeline, rise in target population, and favorable government initiatives are some of the key factors contributing to market growth.

Huntington’s disease (HD) is an inherited neurodegenerative disorder characterized by a combination of motor, cognitive, and psychiatric symptoms. HD accounts for approximately 30,000 cases annually in U.S. and Juvenile HD accounts for nearly 16% of all cases. Both men and women are affected equally, and the prevalence is uniform between all races and ethnic groups. 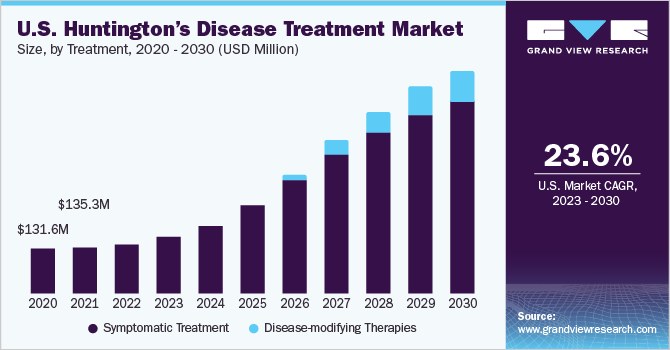 Currently, only two symptom-alleviating therapies are specifically approved for HD: Xenazine and Austedo. The market is witnessing a shift in terms of a drug-development approach from conventional symptomatic therapies to disease-modifying therapies, driven by a better understanding of the pathogenesis of this disorder. Rapid uptake of improved symptomatic therapies and pipeline breakthroughs will remain the major factor driving the market over the next few years.

Huntington’s disease can be caused by dopamine imbalance, which contributes both to involuntary movements such as chorea as well as decelerating voluntary movements. Due to lack of approved medications, the current clinical needs of HD are largely served by off-label use of conventional antipsychotics and anti-epileptics prescribed for treatment of severe emotional as well as motor impairment characteristics.

Nucleotide-based gene silencing therapies such as RNAi and antisense oligonucleotides offer promising treatment options. IONIS-HTTRx is the first drug to demonstrate significant, dose-dependent reductions of mutant Huntingtin (mHTT) protein in HD patients. Wave Life Sciences’ allele-specific drugs have the potential to target more than half of the HD patient population. Both drugs are expected to contribute significantly to market growth.

High unmet needs within the market present a key commercial opportunity to develop breakthrough disease-modifying therapies. The Huntington’s disease pipeline is expected to witness new developments over the next decade as several privately-held and innovation-driven pharmaceutical companies venture into the HD treatment arena. The introduction of disease-modifying drugs is poised to transform the market landscape. With ongoing research aiding in further understanding its pathogenesis, there are increasingly significant opportunities for drug companies to develop new drugs with novel mechanisms of action.

Lowering levels of mHTT has been demonstrated to be therapeutically beneficial for HD. At present, more than 20 products are being studied for treatment for Huntington’s disease in various stages of clinical investigation. Wave’s PRECISION-HD program is the first to follow an allele-specific approach, which is aimed at targeting the underlying cause of Huntington’s disease.

Stem cell therapy is also generating interest as a potential treatment for the condition. Currently, Cellavita, in collaboration with Azidus Pharma, is investigating cell therapy CELLAVITA-HD in Phase I ADORE-DH trial.

U.S. dominated the market with more than 60.0% share in 2016 and is projected to maintain the leading position through 2023. Multiple product launches during the forecast period, increased adoption of novel therapeutics, and presence of key manufacturers in the country are a few factors responsible for its dominance. 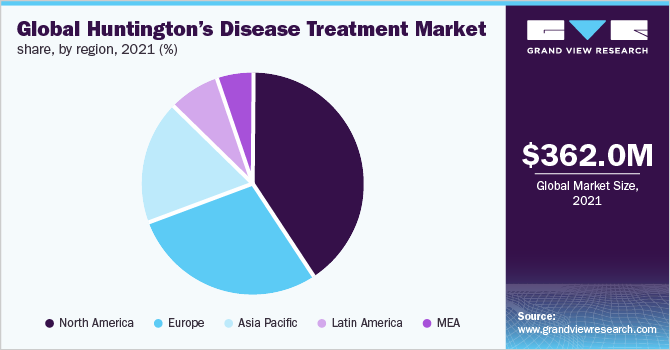 Huntington’s disease is notably rare in Japan, with a prevalence of less than 1,000 cases annually. It is expected that Japan will register the slowest market expansion through the forecast period, among other major markets.

Valeant led the market until 2017, supported by Xenazine’s strong competitive position as the only product approved for treatment of chorea associated with HD. However, Valeant is expected to face significant competition due to generic penetration and launch of Teva Pharmaceuticals’ Austedo. Austedo’s key patents expire in 2031, which gives Teva significant commercial lead for further market penetration.

UniQure’s AMT-130 was the first investigational AAV-gene therapy to receive orphan drug designation by the U.S. FDA in October 2017 and by the EMA in January 2018. Vaccinex’s VX-15 represents the first-time use of monoclonal antibody for treatment of HD. In February 2016, VX 15 received Fast Track Designation for the treatment of HD. Vaccinex initiated Phase II SIGNAL trial in June 2015 and top-line data is expected by the fourth quarter of 2018.  Several other biopharmaceutical companies are focused on development of novel treatments in areas of unmet therapeutic needs of Huntington’s disease.

This report forecasts revenue growth at global, regional, and country levels and provides an analysis of latest industry trends in each of the sub-segments from 2017 to 2023. For this study, Grand View Research has segmented the global Huntington’s disease treatment market report based on treatment: