The aerosol cans provide a superior alternative for dispensing products such as paints, hair sprays, shaving foams, and insect sprays. In addition, the aerosol based toxic sprays such as insecticides and bug sprays witnessed high demand as they provided for contact-less product application. This resulted in an increased demand for aerosol propellant gasses used in aerosol cans.

The market witnessed high substitution of the propellant gasses containing chlorofluorocarbons (CFCs) with hydrocarbons, Dimethyl ether (DME) and other advanced products such as Solstice Propellant. The CFCs were substituted as they resulted in the depletion of ozone layer leading to a negative impact on the environment. This resulted in an increased emphasis on the research and development of advanced products that could be used as propellants. 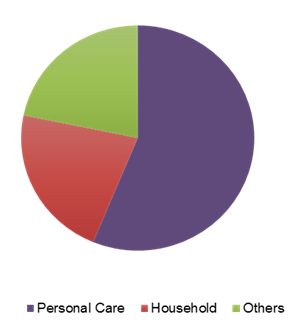 Hydrocarbons such as ethane, propane, and butane emerged as the favored choice of propellants due to superior characteristics such as better spray quality, higher stability and no interaction with the main product.

The introduction of Dimethyl ether and Methyl ether as propellant due to superior performance and low risk to environmental health is expected to drive the demand for such propellants over the next nine years.

The use of such aerosol propellant gasses leads to an increased demand for aerosol based products as they did not lead to any significant damage to the environment. Increasing use of such propellants in personal care, automotive and spray paints is expected to drive the demand for the product.

Another distinct characteristic of the market is the high importance and emphasis laid on the research and development activities to formulate new and advanced products, so as to heighten the affinity of the FMCG companies towards the use of aerosol media for storing and dispensing the product. The development of environment-friendly bio-propellants can be seen as a major result of the efforts and investments in research and development by the manufacturers.

The market also witnesses capacity increases in a bid to increase the company’s revenue and market share. In January 2012, Akzo Nobel increased its dimethyl ether production capacity to 45000 tons at its manufacturing facility in Rotterdam. The move was attributed to the effort to cater to the increasing demand for dimethyl ether demand.

The development of Eco-Valve technology by the Spray Research Group at the University of Salford that uses environment-friendly gasses such as Nitrogen is expected to drive the demand for such propellants.