The butane market size was valued at USD 60.01 billion in 2015 and is expected to witness significant growth over the forecast period. Increasing demand for liquid petroleum gas (LPG) for various applications is expected to have a positive outlook over the coming years. Butane is used in fuel manufacturing processes due to its properties such as high flammability and easily liquefiable.

Butane demand was 138.23 million tons in 2015 and is projected to a gradual rise in the coming years. Volatility in spot prices of crude oil and NGL may hinder butane growth. Increasing groundwater contamination due to leakage of MTBE along with growing alternatives such as ethanol for gasoline blending may pose challenges to the industry over the next few years.

Capacity expansion coupled with increased spending on the development of refineries and petrochemical complexes, especially in the Middle East is expected to augment market growth over the forecast period. Rising demand for basic energy requirements such as cooking and heating purposes has fuelled the LPG application over the coming years.

Technological developments by companies for increasing the application areas for butane are expected to act favorably on industry participants. Companies have adopted strategies to concentrate separately on upstream and downstream businesses to strengthen their presence globally.

The LPG segment accounted for the largest share in 2015 and its demand was 92.12 million tons 2015. Increasing applications for LPG as a fuel, in residential and commercial sectors for cooking and heating purposes, are expected to spur the market growth over the forecast period. Butane and its isomer are used for gasoline blending in refineries as oxygenate as well as to improve its octane rating.

Iso-butane is expected to replace the conventional hazardous chlorofluorocarbons (CFC) which were previously used as propellants, refrigerants, and deodorants. The fuel gas applications in refineries improve the flammable properties of the fuel and are therefore projected to propel the growth from 2016 to 2025. The petrochemical segment is expected to be the fastest-growing market over the forecast period.

Increasing disposable income and standard of living is anticipated to augment the growth over the forecast period. Rising incidences of human health hazards owing to the inhalation of butane gas have put the market under several regulations and distribution norms. These regulations and standards acts are expected to influence negatively over the coming years.

Asia Pacific dominated the regional segment owing to the surge in demand for the gas in refineries and chemical processing units in China. Asia Pacific regional segment was valued at USD 22.17billion in 2015 and is projected to grow at a CAGR of 4.2% over the forecast period. The growth of various end-use industries such as automotive and infrastructure in Asia Pacific as well as Latin America is expected to drive the butane market.

Favorable government regulations in terms of subsidies and multiple connections for LPG are the major factors, which contributed to the surge in demand for LPG and hence butane in these regions. The Middle East is the major regional producer of the butane market due to the presence of their natural resources of petroleum and oil. 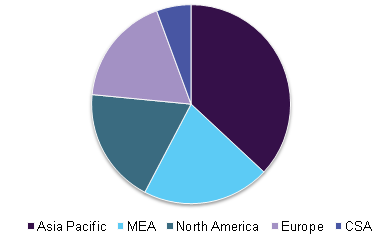 North America is also anticipated to have a positive outlook toward growth through its auto fuel and petrochemicals industry. The rapid development of shale gas in the U.S. is expected to support the sustainable supply of natural gas liquids and will eventually benefit the market over the next few years.

The market is oligopolistic and is expected to move towards consolidation. Key participants compete against each other based on services and overall profitability. Since the market is comprised of several players and is capital intensive, the barriers for entry are quite high.

Few companies have been involved in R&D for developing bio-based alternatives in order to create niche applications. For a new market player to enter this industry and sustain the existing competition, the company has to bring some sort of innovation in terms of product development or substitute products with added applications.

This report forecasts volume &revenue growth and provides an analysis on the latest trends in each of the sub-segments from 2014 to 2025. For the purpose of this report, Grand View Research has segmented the global butane market on the basis of application and region: