The global advanced energy storage systems market size was worth USD 1.91 billion in 2014. The steady growth in electricity consumption along with the expansion of the energy demand-supply gap is expected to propel the utilization of the product over the coming year. Constant electricity production coupled with high variation in demand is the primary reason for the deficit worldwide.

The rising focus on energy management in order to meet the electricity demand at peak times is likely to facilitate the utilization of the product over the coming years. Furthermore, extensive R&D for the development of sustainable energy sources is anticipated to fuel growth. 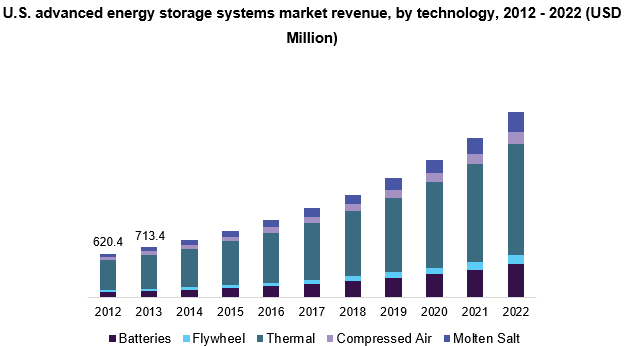 Energy storage systems are expected to become an imperative element in the electricity management system owing to frequently changing demand peaks by the time of the day as well as season. Furthermore, rising concerns regarding energy conservation and transition from fossil fuels to alternative sources are expected to surge demand for advanced storage systems over the forecast period.

The market is anticipated to witness an increase in utilization over the coming years due to rising concerns associated with CO2 and GHG emissions. U.S. Department of Energy (DOE) has proposed the Public Utility Regulatory Policies Act (PURPA) for the development of renewable energy resources. The presence of such stringent regulations will improve the industry outlook for advanced energy storage systems. Furthermore, the ability of the product to provide standby power for utility transmission & critical loads coupled with the growing scope for the product in electric vehicle charging stations are expected to drive the market over the forecast period.

Companies such as General Compression, Halotechnics, and GE renewable energy are aiming for technological advancements that will propel the industry growth during the forecast period. For instance, Siemens Gamesa is developing a cost-competitive energy storage solution that is used to convert existing GWh-scale power plants into storage systems.

The thermal segment accounted for the largest maximum share of 70.8%, in terms of capacity, in 2014 on account of high efficiency and temporary energy storage for later use. No requirement of inputs such as lithium for battery technology or molten salt & no geographical constraints is likely to fuel the growth further. The batteries segment is anticipated to witness significant growth during the forecast period. The growth can be attributed to the easy charging of batteries and liquid electrolyte reenergizing factor that leads to minimized electricity wastage.

Molten salt technology can be employed to retain thermal energy collected by a concentrated solar plant which can be further used to generate electricity at night and in bad weather. Halotechnics, a niche player in the market, has developed a system that employs molten salt chemistry to store power from any source of electricity. 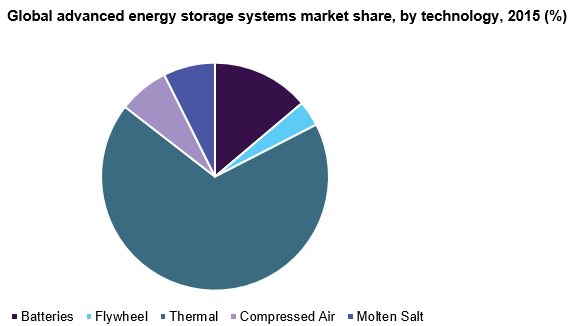 Increasing demand for flywheel technology in industrial applications is expected to augment the growth over the forecast period. A flywheel is a mechanical energy storage system. This technology has vast market opportunities on account of more reliability, longer life, enhanced efficiency, and less maintenance.

Industry participants have been intensively investing in research and development projects on employing this technology for emerging grid storage systems. For instance, Hawaii-based firm American Electric Co. LLC deployed the 8-kW energy storage system with flywheel technology at a power generating station in Oahu. The system stores electricity in the form of rotational kinetic energy and charges & discharges without any loss of capacity for multiple duty cycles per day.

The technology is estimated to experience high growth as a result of uninterrupted & continuous power supply to the grid with immediate response, quality improvement, and frequency regulation. However, high capital investment is expected to be a major constraint for this technology over the forecast period.

Renewable energy technologies such as wind & solar PV are estimated to witness high growth in various developed & emerging economies including Japan, India, China, Germany, the U.S., and Italy. This is likely to increase the utilization of the product over the coming years.

Asia-Pacific is expected to witness the fastest growth with a CAGR of 15.7% from 2017 to 2025. Rising infrastructural spending from residential, industrial, and commercial sectors among developing nations including China and Indonesia will encourage the advanced energy storage systems market in the coming years. Significant capacity additions owing to increased energy demand is likely to have a positive impact on the market.

Europe and North America accounted for a substantial share in the market as a result of large installed capacities. Increasing government funding is expected to provide growth prospects for the market in North America. In addition, rising grid-scale projects owing to enhanced peak demand management are expected to propel the growth further. Growing adoption of electric vehicles along with stringent government regulations in countries such as Germany and France to minimize pollution levels will bolster the business growth during the forecast period.

The U.S. accounted for a share of over 80.0% of the North American market in 2014. The presence of numerous players coupled with a high adoption rate of new technologies is expected to fuel the growth over the coming years. The U.S. has adopted several regulations and policies to bring down pollution levels which will positively influence the business growth in the future.

The global market is fragmented with the presence of a large number of participants that offer multiple technologies for storage. The companies including Storage, Alevo, AES, GE, Altair, and LG Chem are involved in extensive R&D in order to maintain their global position.

Industry participants indulge in joint collaborations for research on providing systems for several applications and technological innovations. For instance, Altairnano and AES Corp jointly developed a battery system for the grid-scale application. In March 2015, Alevo entered into an agreement with Systems Control to design and manufacture Alevo’s GridBank Energy Storage Enclosures. In February 2015, Alevo signed an agreement with Customized Energy Solutions to provide 200 MW of GridBank powered frequency regulation services to the wholesale market.

This report forecasts revenue and revenue growth at global, regional & country levels and provides an analysis of the industry trends in each of the sub-segments from 2012 to 2022. For this study, Grand View Research has segmented the global advanced energy storage systems market on the basis of technology and region.